How to Make Money From an Oil Boom

In May 2022, I put out a very strong bullish thesis titled “The Oil Market in Seven Charts.” You can find it here.

Despite leading the market and having a booming year, the oil sector is still undervalued to the general market by at least 25%. And knowing the way that the oil market always overshoots — both going up and coming down — by the time the oil bull is over, the sector will be overvalued by at least 50%.

Furthermore, due to the foolish energy policies now popular in the West, most large-cap energy stocks will easily double from here. Many small, little-known wildcatters will go on 1,000% runs.

I was right on target, but we are only halfway there. Companies like Africa Oil (TSX: AOI), which I own, are up about 250%. But some companies like Journey Energy (TSX: JOY) are up 2,050%, rising from a very low bottom.

When I was writing in May, we had several catalysts for oil, including a reopening of the economy post-COVID, a return to in-person work, a reopening of China, and the looming Russian oil embargo on December 5.

Some things have changed, but the bullish scenario for oil remains in place. China didn’t reopen, and people didn’t return to work. On the other side of the ledger, people did take more trips, and airlines are setting records.

There has also been a slowdown in the growth of production in the shale fields. Unemployment among oil workers is at an all-time low. They couldn't hire enough people to pump more oil if they wanted to.

OPEC has cut production quotas by 2 million barrels a day. This is mostly politics as OPEC couldn’t hit those numbers anyway, but it does show that the cartel won’t even try to push production higher.

China has said that it will slash export quotas by 56% in order to ensure its own supply. In the recent past, China was buying U.S. and Russian oil, refining it, and selling it to India or Europe. China aims to reduce product exports to zero by 2025.

It's the refined product that is in short supply. It goes by many names, including D2, gasoil, and diesel — and it keeps the world economy running as it is used in mining equipment, harvesters, and trucks.

Refined products are in short supply in the U.S. because a number of refineries closed during the pandemic; there has also been a lack of investment in the sector due to political headwinds.

Per a recent Bloomberg article, Goldman Sachs went on the record saying:

This isn’t just talk. Crack spreads are off the chart. 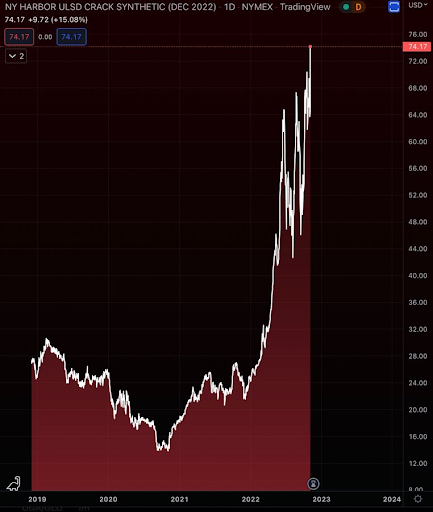 A crack spread is the difference between the cost of a barrel of crude and the petroleum products refined from it. Large crack spreads mean that refiners like Marathon (NYSE: MRO) are printing money.

It also means that diesel prices are going to go up. Another winning sector will be oil tankers, especially those shipping tanker companies that specialize in moving D2 around the world.

It should also be noted that there is a trend among countries to restrict exports of oil, put price caps on Russian oil, and establish “windfall” taxes on the oil industry.

You only have to read a history book to realize why these ideas are not only stupid and won’t work but will also have the exact opposite effect that the elites believe they will. They will create scarcity and high prices.

As an investor, you want to find a nonindustrial oil exporter that is making a lot of money from oil. That exporter is Guyana, which is expected to grow its GDP by 57.8% this year — by far the biggest in the world.

The country found a massive 11-billion-barrel oil field offshore (30 total discoveries) that produces low-cost crude, which it is exporting to Europe. Guyana will be the big winner over the next three years.

I’ve written a free report to tell you all about it. One company I recommended is already up 29% since September. Don’t sleep on this one — act now.