How to Become the Next Teslanaire

This is a new term that describes investors who bought early shares of Tesla (NASDAQ: TSLA) and became millionaires in the process.

If you bought 1,000 shares of Tesla right after it went public at around $25 per share — back when I told investors it would be a wise investment — you might be a Teslanaire.

To be exact, those initial 1,000 shares would’ve been worth more than $1 million after the stock exceeded $1,000 per share.

How many people do you know who have ever had the opportunity to turn $25,000 into $1 million?

Better yet, how many times have you had the opportunity to turn $25,000 into $1 million?

Although Tesla has long been a punching bag for career short sellers and people who still believe the internal combustion engine is NOT an outdated technology, those who took a chance on the electric vehicle startup early on made a fortune.

Of course, in the world of investing, Tesla’s success is not the norm.

Truth is, most folks go their entire lives without ever pulling in a gain anywhere close to what Tesla has delivered over the past 10 years.

But that doesn’t mean it’s impossible.

In fact, as we head into 2021, you’ll definitely have an opportunity to get an early piece of the next “big thing” that could ultimately make those Tesla gains look like peanuts.

Welcome to the Wonderful World of Psychedelics

I first started writing about the psychedelics market about two years ago when there wasn’t a single publicly traded psychedelics company out there.

Today, there are dozens, and by the end of the year, there will be in excess of 50 pure plays in the space.

Of course, most will be garbage, as is the case anytime a new, vibrant market enters the arena. But if you can bag a few good ones — the best in breed — you could also easily pull in the types of gains that Teslanaires pulled in... and probably in a much shorter time frame.

This psychedelics company went public back in early 2020, and I recommended that investors get in below $0.40 a share.

By early December, the stock traded in excess of $5.00 a share. 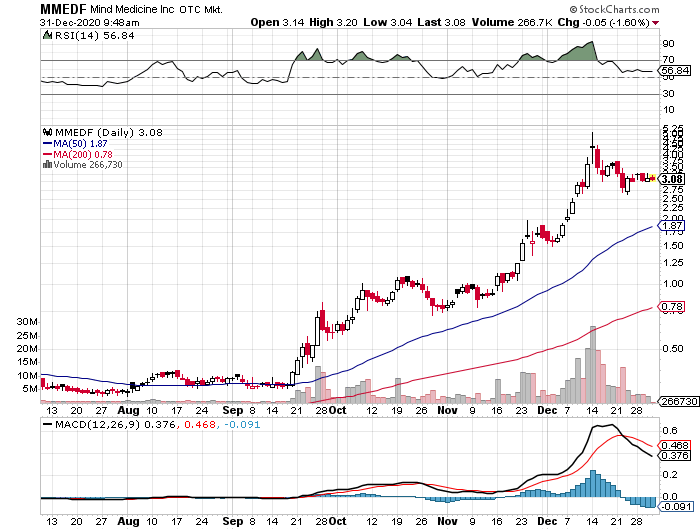 Of course, the stock has sold off a bit since then, but mark my words: 2021 is going to be a very profitable year for MindMed investors, as well as investors who are jumping on the right psychedelics stocks now.

This Is Going to Be HUGE!

If you're a regular reader of these pages, you already know that I made a ton of money on Tesla.

I also made a ton of money in the cannabis space — before the bottom dropped out of that market.

I recommended that investors buy shares of this stock back in 2015 when it was trading for just $1.60 a share.

That's nearly a quarter of a million dollars from just five grand.

Of course, I sold long before then, recommending investors unload their shares at $50.

Not bad at all.

But compared with what we’re going to see in the psychedelics market in 2021, that 3,000% we pulled in on Canopy Growth will look like chump change.

Look, I've been doing this for a long time.

But nothing has ever looked more profitable to me than the burgeoning psychedelics market.

Of course, don't just take my word for it.