How Efficient is Nuclear Really?

A few weeks ago, I got an email from a reader that called out a mistake I’ve been making for years.

What I assumed was a simple matter of semantics was in reality two completely different terms all along — it’s just that one is so often used to refer to the other.

I’ve spent some time looking into my mistake, and I’d like to thank that reader for the clarification.

It doesn’t change my convictions on the matter at hand...

But it certainly helps bring the point home.

Last month, I made this assertion about nuclear power plants:

The number I cited as efficiency was actually what’s called "capacity factor," which is a little different.

Capacity factor is, indeed, what I was talking about. It refers to the ratio between the amount of energy a plant could be producing at peak optimization and what it actually produces.

Though this is how many people will define efficiency, there’s another kind of efficiency that refers to the amount of energy produced that is ultimately used. 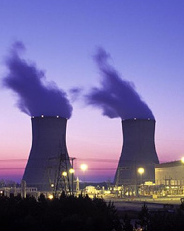 You’ve already seen this process in action on most of your electronic household appliances. "High efficiency" means the appliance uses more energy than it loses when it converts electricity into mechanical action.

In the case of power plants, this usually has to do with heat.

Most of our traditional baseline energy producers, including coal, natural gas, nuclear, and thermal solar, produce energy through heat.

Technologies that lose less of this heat in the process are the most properly efficient types.

According to the EIA, natural gas has the highest efficiency at around 43% as of 2015. Coal, oil, and nuclear plants all fall around 33%, with nuclear keeping a slight lead.

In its latest Annual Energy Review, the EIA estimated that the conversion efficiencies of renewables were even lower than that. The report placed wind at 26%, thermal solar at 21%, and PV solar at 12%.

Full disclosure: these numbers are cited as being from 2011, which means the technology has definitely improved a lot since then.

For instance, in 2016, First Solar announced that it had created a PV solar cell that could run at 22.1% efficiency, a new record!

But it’s not scalable yet. The company noted that its mass production lines were making panels that ran at just 16.4% at the time and that it believed that number could increase to 19.5% by this year.

One report from November 2016 found that wind turbines can reach 45% efficiency in perfect conditions, though the usual range is between 10% and 40%

The problem here is clear: these numbers aren’t yet the norm. And even if the highest-efficiency technologies were scalable, conditions are rarely perfect.

So, given this new distinction, it seems nuclear is still the top contender when it comes to clean energy.

Waiting in the Wings

What kind of weight do these numbers carry for investors?

For one, they only further prove my point that nuclear is the best clean energy source out there.

I’ll admit, I’d love to see solar and wind tech that could cover base load power demand today. But that’s not happening, and it won’t for quite a while.

And I hope everyone can see how dangerous it would be to replace all the aging nuclear reactors in the world with natural gas plants.

While cleaner than coal, natural gas still produces about 117 pounds of CO2 for every thousand cubic feet of gas. Nuclear power emits nothing.

In countries working to both increase energy efficiency and decrease emissions, nuclear is the way to go. Already, nuclear capacity is increasing in places like India, Russia, and China.

And while it’s falling elsewhere, there was a net gain in global capacity in 2015.

I expect we’ll see something similar when the numbers for 2016 come out. New projects are being planned as you read this by some of the world's largest energy consumers.

China and India, both highly coal dependent and smothered in smog, have commissioned several new nuclear power plants in the last few years.

Indian Prime Minister Narendra Modi made a deal with French Areva to build the Jaitapur plant in 2015. Then in 2016, Modi announced the approval of a deal with American Westinghouse to build several reactors in the country.

Even Japan, home to the much-cited Fukushima nuclear disaster of 2011, is looking to replace its lost nuclear capacity with safer reactor technology.

Every new plant that comes online helps open a door that investors haven’t cared to walk through in a long time...

The Money’s in the Details

As Luke noted earlier this week, the price of uranium for nuclear reactors has hit a bottom.

One large producer has recently decided to cut production due to the past few years of stagnant demand from the nuclear energy industry.

Well, it’s not going to be stagnant for much longer!

Countries are coming to terms with the idea that if there’s one good, clean way to transition from fossil fuels to renewables, this is it. Nuclear capacity is slowly but surely climbing its way back up.

And as it keeps climbing, so too will the value of much-needed uranium.