The Arctic Oil That Never Was

From November through April, it's completely frozen.

Only during the summer months does Greenland enjoy temperatures typically above 32 degrees Fahrenheit — and even then, I imagine this is still a place more suitable for adventurists, sled dogs, and narwhals.

Though these days, it's not uncommon to find plenty of roughnecks in that region, too... looking to tap a bonanza of Arctic crude.

As further proof that the era of cheap oil is over, we have all accepted the fact that we are willing to go through whatever steps it takes to get just a little more, like the good little junkies we are.

Tapping a massive bounty of crude in the waters of Greenland is no easy (or safe) task. Yet we will not be deterred.

After all, we're talking about estimates as high as 50 billion barrels out there. That's enough to cover global consumption for just over a year!

Don't get me wrong; aside from my sarcastic cricket comment, that Arctic oil is insanely valuable. And don't think for a second we're not going to do everything we can to slurp it up...

Though it should be noted that the most recent Greenland oil expedition didn't work out as well as expected...

After two years, eight wells, and about a billion dollars, Cairn Energy (LSE: CNE.L) has packed up its hopes and dreams.

The oil and gas exploration company failed to make a commercial discovery of oil or gas on its Greenland campaign. And unless the company finds a partner to take on some of the risk, it is highly unlikely they will return.

But Cairn is just one company, one failure...

The results of this past expedition do not dictate that all exploration missions will come up empty-handed.

In fact just last week, industry leaders met in Copenhagen where they kicked around new proposals for licensing off the eastern part of Greenland.

Husky Energy (TSX: HSE) is expected to have its claws dug into some promising locations in the waters of Greenland in about two years.

But you know what's going to happen over the course of those two years?

Oil production in North America will continue to explode.

While billions continue to be spent in Greenland to chase the dream in a location where you can only drill during the summer months, we're making a fortune right here in the United States, where the stage is being set for a level of oil production that could rival that of Saudi Arabia in less than ten years.

I'm not saying there will be nothing but repeats of Cairn's recent unsuccessful adventure in Greenland...

But right now, if you're looking for the biggest bang for your petrol buck — and with significantly less risk — this is where you need to be: 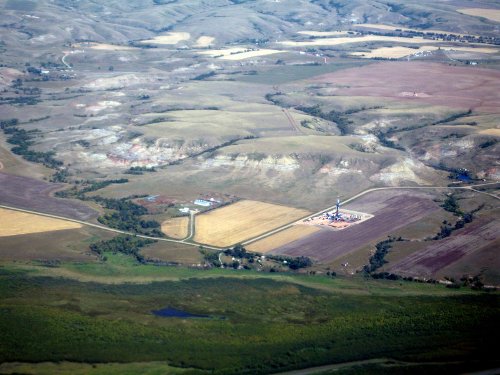 You may not be able to see the Northern Lights from here, but you don't have to look very far to see the opportunity.

The development in this region is so intense, it's actually been dubbed "America's New Boomtown."

Workers from all over the world are flocking to this remote location. Jobs are plentiful, and they pay top dollar.

Because that's what you get when domestic oil production is well underway — that and an opportunity to make a boatload of cash by exploiting this new wave of production for everything it's worth.

And that's exactly what my colleague Keith Kohl has been doing. He's been following the development of this little domestic oil play since 2008... just waiting for the perfect time to strike.

That perfect time has finally arrived.