But Not Enough to Tell You the Truth. Part 2 of my report: Officials Wake Up to Peak Oil

Written by Brian Hicks
Posted April 16, 2010
In the first part of this series, I reviewed a series of reports from March supporting the peak oil view, and warning that world oil production very well may go into terminal decline by 2015 or sooner.

The sources included the UK Industry Task Force on Peak Oil and Energy Security and officials within the British government; researchers within the College of Engineering and Petroleum at Kuwait University; researchers from Oxford University; and ConocoPhillips, the third-largest oil company in the U.S.

On March 25, the U.S. Department of Energy (DoE) joined the officially worried, with a report in French newspaper Le Monde titled "Washington considers a decline of world oil production as of 2011."

The author had pestered Glen Sweetnam, director of the International, Economic and Greenhouse Gas division of the Energy Information Agency (EIA), for details about a presentation he had given at a semi-public DoE round-table with oil economists in April 2009. How he got wind of it, I don't know, but I admire his persistence.

The zinger was this chart: 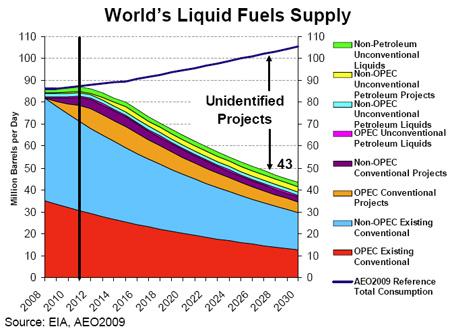 The implication was obvious: The EIA has no idea how production could increase after 2012. In the absence of these "unidentified projects," they expect global oil supply to decline by about 2% per year - from 87 million barrels per day (mbpd) in 2011 to 80 mbpd by 2015 - while demand rises to 90 mbpd.

Within five years, then, there will be a 10 mbpd gap between supply and demand—roughly a Saudi Arabia's worth of production (currently 10.8 mbpd).

(I should note that although Sweetnam's chart gives the EIA's Annual Energy Outlook 2009 as the source, I found no such chart, nor even the data that might produce it, in my copy of that publication. I am unable to explain that discrepancy.)

The agency officially continues to lay any concerns about future supply at the feet of insufficient investment. In Sweetnam's interview with Le Monde, he put it this way: "'a chance exists that we may experience a decline' of world liquid fuels production between 2011 and 2015 ‘if the investment is not there.'"

It's a weak position to take in the wake of the oil price blow-off of 2008. The world's developed economies simply cannot tolerate the high prices that would entice that investment (see "'Peak Oil Demand,' Yes... But Not the Nice Kind"), and I'm sure the EIA knows it.

You'd think the American media would have been all over the story, as it signaled a major about-face in the official U.S. position on peak oil. As recently as 2008, the EIA's base case scenario was for oil supply to rise through 2030, and not decline until 2090!

Yet five days later when I Googled it, there was not one story from a major domestic publication. Only blogs and the usual peak oil sites had picked it up.

In my seasoned judgment, the American media blackout is deliberate.

And speaking of media blackouts...

On March 30-31, the biennial International Energy Forum (IEF) summit took place in Cancun. Attendees at the world's largest energy forum included ministers from 64 countries, members of the IEA and OPEC, and other dignitaries.

In short, the twin conferences were a Very Big Deal.

But when I searched Google News for stories containing the exact phrase "International Energy Forum" and published during the conference, it wasn't until the seventh page of results that I found any stories from major American media outlets, and those stories were strictly focused on specific issues like oil and gas prices. They said not a word about peak oil.

A journalist from the oil and gas media organization Platts explained what happened on his blog. All media were barred from the IEF conference room, and exiled to a press room where the presentations were shown on monitors with no sound. When reporters asked for sound, the monitors were turned off. All sessions were then declared to be private, and the reporters that had come from around the globe to cover the conference were simply shut out.

According to journalist Matthew Wild, the presentations included one from PFC Energy titled "Unpacking Uncertainty: Investment Issues in the Petroleum Sector."

Although it sees the decline of mature fields proceeding at a slower rate than the IEA, PFC Energy still believes it will be "rapid enough to produce a world energy picture that differs vastly from previous long-range energy assessments," and goes on to explain:

This is not a world of "peak oil" where global hydrocarbon potential is exhausted, but rather of peak production, where the petroleum industry's ability to continue to increase-or even maintain-production of conventional oil (and eventually gas) is constrained. Exploitation of unconventional oil will provide additional liquids, but in all probability only at increasingly higher costs, and it will depend on significant investments to develop appropriate technologies to convert today's resources into tomorrow's reserves.

The exact timing of both the plateau and onset of irreversible decline will be influenced by the factors that determine long-term changes in supply and demand. Nevertheless, the challenge is coming, and this emerging world of limited conventional production will require major adjustments on the part of both consumers and producers.

The phrasing of the first statement is curious. Serious observers know that "peak oil" has never meant the exhaustion of hydrocarbon potential, and has always meant the peak of production flow rates. I covered a presentation by Michael Rodgers of PFC Energy at last year's peak oil conference, so I must believe that PFC Energy knows better than to characterize peak oil that way and simply chose to do so for the appeasement of its IEF audience.

In any case, we now know that the world's top energy ministers have seen a serious presentation on peak oil, and heard the warning about its seriousness, albeit a somewhat soft-pedaled one.

Most reports on the conference featured the theme that better data and transparency on reserves reporting is needed - a bell that peak oil mavens like Colin Campbell have been ringing for over a decade. Without it, the world is in the dark about the true future of oil supply.

To reinforce that point, IEA head Nobuo Tanaka told the Financial Times at the conference that it has invited China to join the IEA because global oil demand has shifted to the East. "Our relevance is under question," he worried, as the opacity of data on Chinese oil demand and inventory threatens to blind the agency to the true state of the world's oil markets.

Another key theme was an evident widespread concern about the volatility of oil prices. By the end of the conference, IEA, OPEC, and the IEF were expected to announce a "joint action plan" to control volatility and ensure that prices remain stable enough to encourage new production.

While the IEF was under way, the chairman of the Intercontinental Exchange (ICE) told Reuters that blaming speculators for price spikes was a "crutch" used to avoid looking at the realities of oil supply and demand. As I explained in July 2009, traders have turned to the ICE to skirt the stricter position limits on the NYMEX. The Commodity Futures Trading Commission (CFTC) has now proposed new regulations to limit the influence of speculators in the energy markets, which are up for public comment until April 26.

You (Still) Can't Handle the Truth

By any measure, March was a watershed month for the truth about peak oil.

Estimates on the timing of the peak have narrowed dramatically, and now center on the 2012-2015 time frame. The range of estimates on the peak rate of production remain a bit broader and shrouded in caveats, but they are rapidly drawing closer to 90 mbpd. And the globally averaged, post-peak annual decline rates are settling in around 2%.

In other words, industry and governments appear to be coming around to what my call has been all along: 2012, at 90 mbpd or less, then declining at about 2.5% per year.

Now we know that the oil and gas industry, as well as the world's governments, are not only aware of the peak oil threat... they too are deeply worried about it.

But not worried enough to tell the American people the truth... not just yet.