Gold to Surge, Dollar on a Knife's Edge

In many ways, bets on commodities are really bets on the U.S. dollar. If your money is in dollars, you have a lot of buying power right now.

As you can see from the dollar index chart (DXY) below, the greenback has gained 25% over the last two years. This surge has helped push down import costs and oil prices.

But something has changed more recently. The U.S. Federal Reserve has lost credibility. Investors no longer believe the Fed will hike rates even if Yellen is pounding the table threatening to do so.

The last three weeks have seen the dollar fall the most since 2013. Bloomberg is reporting that the odds that the Fed will raise rates in December have dropped to 27%.

The reasoning is that this week's economic reports, including retail sales (ex food and autos -0.38%) and producer prices, indicate a slowing economy. Third-quarter GDP expectations have been cut to 0.9%. Wholesale inventories have jumped to 2008 levels. These numbers are not good.

As a result, investors are selling the U.S. dollar and chasing higher-yielding foreign currency — the yuan, the NZ dollar, and the shekel are all up. The Indonesian Rupiah saw the biggest one-day jump in six years.

I've been telling you for months to start buying Russian stocks, and this month has been particularly good, as the ruble has gained alongside oil. 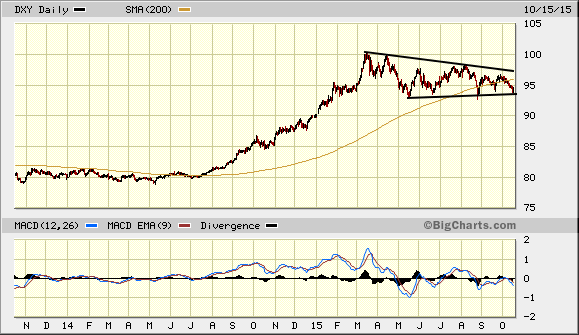 The DXY chart has broken its uptrend and is now in a pennant formation. The MACD is mildly bearish. The price is below the 200-day moving average. If the dollar breaks support here, it could fall 12% to its next support level, which is a huge move in currency markets.

If the dollar breaks, there will be panic as traders rearrange their risk scenarios overnight.

As you can tell by the gold chart, the smart money is already hedging against a big move to the downside in the dollar. 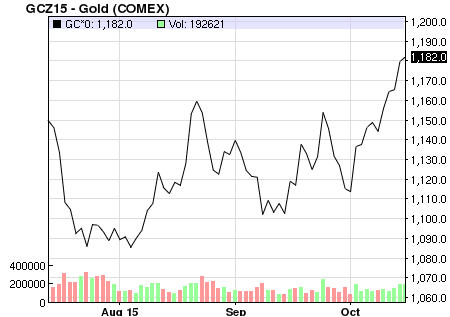 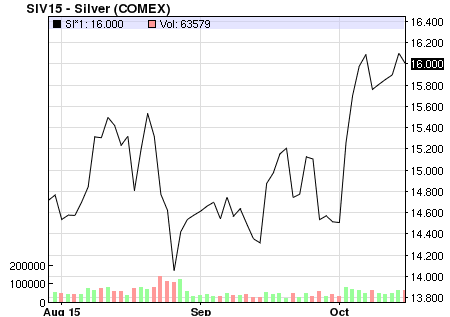 But when you are putting your hard-earned money to work, you want more than one catalyst for an investment to go up in price.

It is all well and good that a catastrophic and sudden drop in the dollar will launch commodities — but it is better if that same commodity has another reason for going up, and better yet if there are multiple reasons.

Today, I'd like to tell you how a German auto scandal will launch a Russian miner, especially in dollar terms.

By now, you've all heard about the VW diesel scandal, where the company used software to reduce vehicle diesel emissions while it was being tested — but it ran dirty at speed.

Bloomberg is reporting that the company is now facing fines of $18 billion. It is probable that diesel cars will become scarce in the future as governments around the world crack down.

This has sent the price of palladium, which is used to filter exhaust fumes in gasoline cars, soaring. 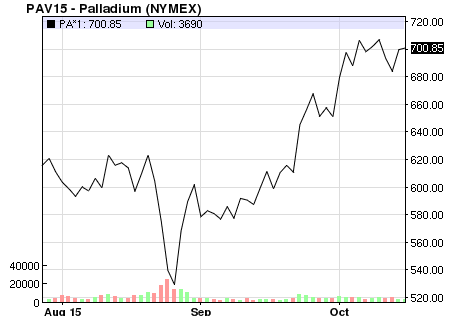 At the same time, platinum, which is used in diesel cars, has fallen 3.4%.

I've found one Russian company that is the largest and lowest-cost producer of palladium in the world.

It is moving higher off five-year lows just as the ruble bounces back, the dollar falls, and the price of palladium surges.

But this move is far from over. The switch from diesel- to gas-powered cars is just beginning. Find out more here.