It's the next big cryptocurrency...

And it's better than Bitcoin in many ways.

2017 was the year of Bitcoin and cryptocurrencies. But gold didn't fare too poorly, either. In fact, gold ended the year on its best rally since 2011. 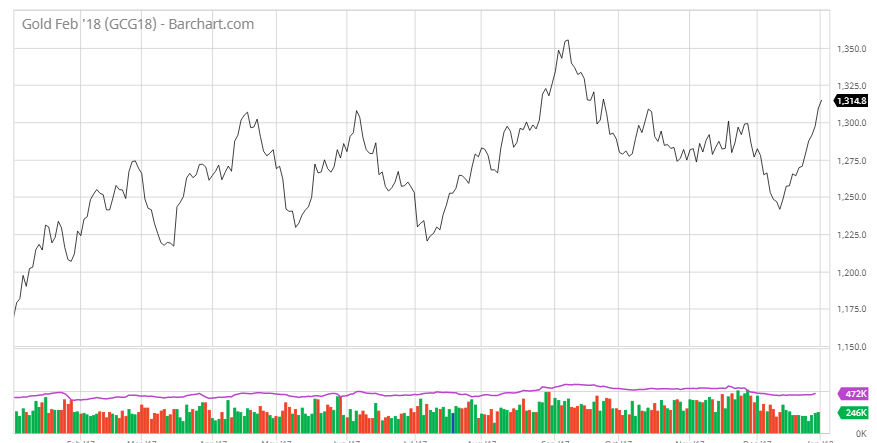 The price of gold has increased 5% in the past two weeks alone. But here are five reasons why gold prices are set to continue much higher as we go into 2018.

The stock market is overheated. U.S. equities have increased over the past 18 months without a 5% correction. This makes it the third-longest rally since WWII. It's an anomaly of good fortune, but something has to give soon.

Moreover, I expect much of the December rally was focused on President Trump's corporate tax deal going through. Now that it has, the market may begin to sell the news.

The market is well overdue for a healthy correction. And a market cool-off will no doubt drive attention to safe-haven gold.

There's almost no one who still disagrees that Bitcoin is in a bubble. And it seems that bubble may be over.

A Bitcoin crash will send a ripple effect across the entire cryptocurrency market, which is now worth $650 billion. I'm expecting much of that to be completely wiped out. But I don't expect Bitcoin owners to sell their cryptocurrency for gold. In fact, they're probably pretty hell-bent on not owning gold.

Instead, I believe it will be the financial media's response to Bitcoin's crash that will affect gold positively.

When the mainstream financial media first began talking about Bitcoin, it always compared it to gold. Nowadays, gold isn't even in the conversation. When was the last time you even heard anyone mention the word “gold” on CNBC?

A Bitcoin crash will force gold back into the limelight to reclaim its rightful role as monetary standard.

Obama-era EPA regulations have stunted mine development in the U.S. for years. The most notable example is Northern Dynasty's Pebble deposit.

Pebble is the largest undeveloped copper-gold deposit in the world. But Obama-era EPA policies have all but shut down the project.

Trump's continued unwinding of Obama-era EPA policies will soon begin to draw attention to U.S. mining. This will be positive for both U.S. miners and gold.

Trump has repeatedly stated that he wants to keep interest rates low. And now it seems the president has the Fed stacked just to do that.

Trump's pick for Chair, Jerome Powell, is actually considered neutral among economists. But there's no doubt he'll want to work with Trump.

According to its last statement (still written under Yellen's watch), the Fed said it expects three rates hikes in 2018. But I think there will be fewer interest rate hikes, which would be a major driver for gold prices throughout the year.

No one is talking about gold right now — no one. Again, let me ask you: When was the last time you heard anyone talking about gold on CNBC? Gold is being all but ignored. And every contrarian bone in my body says that's a strong signal to buy.

All things considered, it's time to buy gold.

We will be bringing you some brand new gold recommendations here in Energy and Capital. Stay tuned.