And It's Time to Take Profits

Gold prices shot up past $1,300 an ounce this morning to a level not seen since summer 2014, following yesterday's FOMC meeting and heavy trading in China and Europe.

And with the Brexit referendum now only one week away, many traders are looking for a continued rally in gold prices.

But despite the potential for further gains in the short term, I think it's wise to lock in any significant gains you've recently seen from gold or gold stocks. 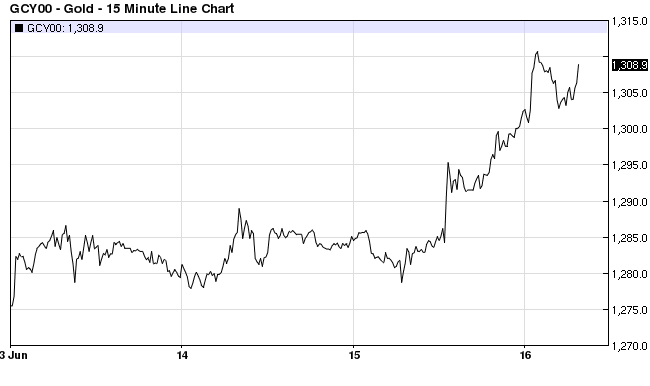 In a widely expected move, the FOMC concluded its June meeting yesterday announcing its decision to maintain interest rates.

The Fed acknowledged slower growth in the U.S. labor market and said that supporting improved employment conditions were among its main objectives.

The FOMC also noted that inflation was below its 2% target and indicated the central bank would move to make increases, saying:

With renewed fears of the U.S. economy slipping into recession, the prospect of higher inflation sent more investors away from the dollar and into gold.

The main focus for gold bulls will now shift to the June 23rd Brexit referendum.

Polls show increasing support for Brexit. And the general consensus is that if Britain chooses to leave the EU, economists there say recessionary conditions may accelerate in the UK, which is positive for gold.

Many already have big expectations on what Brexit could do for gold prices.

MarketWatch quotes a fund manager from ETF Securities: "Brexit would be very beneficial for shorting sterling and we will probably see a big pick up in gold. In that scenario we think gold could hit $1,400 [an ounce]."

Another commentary contributor on gold website Kitco writes, "If Britain votes to leave the EU, gold has potential to jump about $120 in one or two days."

Going into the vote, I believe gold will find support over $1,300 an ounce. But I'm less confident of a massive jump in prices. And after watching gold prices gain over 8% in just a few days, I think it's wise to take any significant profits off the table.

Three weeks ago, I wrote to you in Energy and Capital with my top 10 mining stocks for this summer. Let's take a quick look at where they stand today...

I'm sure it was impossible for you to buy all of these when I first made these recommendations three weeks ago. But I'm now recommending you take any significant profit you've made from any of these.

With such a rally in gold and gold stocks over the past few weeks, I'd like to see gold prices to cool off (or at least level off) before reentering. If you don't want to sit on cash but still want to be invested in metals, I think platinum is a much better buy among the precious metals, and I remain extremely bullish on lithium for the mid to long term.