Getting Bullish on Oil? Here Are 2 Big Decisions You Need to Make Today

Ready to start adding oil stocks to your portfolio?

If you’re asking yourself that question for the first time right now, the bad news is that you’ve already been on the sidelines for what has been a great run over the last year.

In fact, the moment we saw the price for a barrel of Western Texas Intermediate drop as low as $26.05 on February 8, 2016, the bottom was almost too easy to call... almost.

Believe me, we’ve come a long way since then.

It took less than five months for crude prices to jump back above $50 per barrel, with the best companies rebounding strongly during the last three quarters of 2016.

And after watching momentum build in the E&P sector, it’s not difficult to see why the investment herd is flocking back into energy.

However, just make sure you’re asking yourself these two things before you execute that first trade...

1. Do You Have the Right Investment Horizon?

Sure, I know some of you out there hold to a day-trading mantra. You’re in and out of trades in rapid succession, hardly caring to hold onto the paper for more than a few hours. Your charts are set to update every 60 seconds, your blood pressure is through the roof, and you hold your breath every time the market turns the wrong way.

I’ve not only seen these traders in action, but I count some of the best among them as close friends.

And while they may have 12 hours a day to sit in front of their computers and watch the action unfold... you don’t.

You may not have the time (or temper) to conduct a hundred trades a day.

Yet the one solace you can take from your energy investments is this: energy is the single-most important growth catalyst in the world today.

Access to cheap energy is one of the biggest reasons the United States is in the position it is today.

Yes, it’s because of those dirty fossil fuels that some people love to break out their kayaks and protest.

Things are about to get interesting over the next 24 months, too.

If OPEC goes ahead with another cut, the oil cartel will prove just how badly it needs higher oil prices to stay competitive. After all, the United States will soon be exporting more oil than most OPEC members.

Moreover, the EIA’s latest Short-Term Energy Outlook is forecasting oil prices to average $53.46 per barrel this year, then increase to average $56.18 per barrel in 2018.

2. Am I Looking in the Right Spot for West Texas Oil Riches?

Keep the following words close to heart when you’re ready to buy oil in 2017:

Not all shale plays were created equal!

If only it were a simple matter of just picking any old spot and drilling into the oil and gas windows.

If it’s true that not all shale plays are the same, then you can easily see why the same goes for oil companies.

And in some regard, it turns out that the little fish are much more attractive in the Lower 48. I’m referring, of course, to the smaller, independent oil and natural gas players.

Over the last year, many of those independent drillers like Pioneer Natural Resources outperformed oil giants like ExxonMobil, BP, and Total. 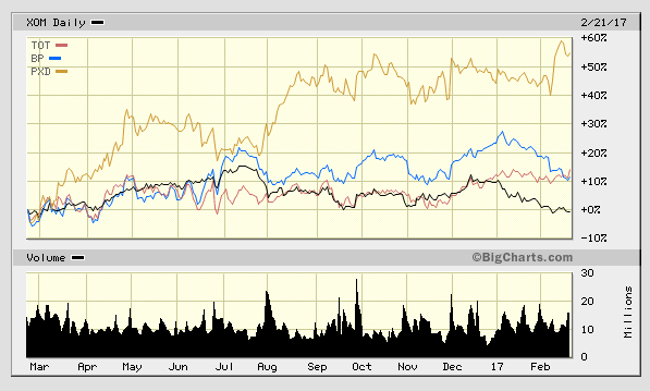 Had you put a dime of your hard-earned money in Big Oil, your returns since oil started rallying would have been rather lackluster compared to the rest of the oil industry.

I know what you’re thinking. Those widow-and-orphan stocks like Exxon are geared for the long haul, right?

After all, investors looking to hold onto their shares for decades (rather than days) should be drooling over the prospect of a steady dividend that has been paid out for more than a century, shouldn’t they?

Well, how about we take those same companies in the chart above and look at how they’ve performed over the last decades. If Exxon is the true workhorse in your long-term portfolio, shouldn’t we see the crude magnate shine during the U.S. oil boom that began back in 2008? 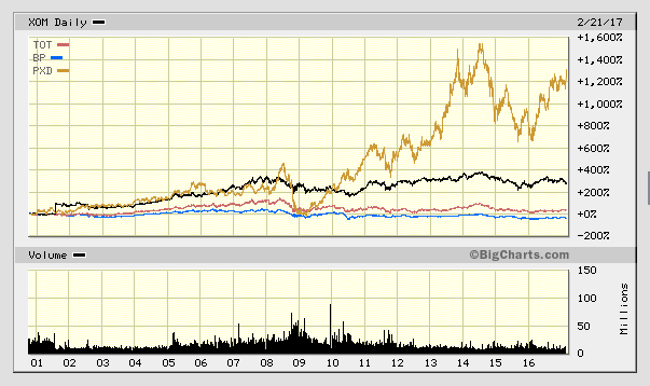 Pioneer Natural Resources isn’t an anomaly, mind you. As I mentioned at the start, there are a host of independent drillers that took advantage of the last bear cycle to improve their drilling efficiencies. In 2016, Pioneer reduced its production costs by nearly 30% over the previous year.

Granted, it does help that they’re drilling in what is arguably the most prolific oil region in the United States: West Texas.

One thing I like to remind my readers about is the fact that these drillers are also getting better with each new well they drill. In 2015, a new well in the Permian was producing roughly 200 barrels per day.

Today, that amount has nearly doubled!

By now it should be absolutely clear how much the U.S. is going to rely on its tight oil resources.

After all, just four tight oil plays make up for nearly half of our total domestic oil production.

And with tight oil accounting for 92% of U.S. oil production growth between 2011 and 2014 (not to mention the fact that our conventional oil production peaked decades ago), you have start asking yourself this:

What am I still doing on the sidelines?

Maybe it’s time to take that next step...