Getting a Head Start on Mexico's Oil Revival

This is your shot at the next Bakken shale

We all thought today would be the day we’d get major news out of Mexico, specifically about the sudden revival of its neglected oil industry.

A new round of auctions will sell sections of the country's vast, untapped shale resources off to the highest bidders, and the market's champing at the bit to see who wins the land grab.

But it was Wednesday's news that ended up throwing everyone into a frenzy.

Turns out this play is even better than we’d expected.

Back in 2006, I was hot on the trail of the Bakken shale of North Dakota.

I saw the massive potential, and it ended up paying my readers and me back handsomely just a few years later.

In fact, I’d been watching closely for months, traveling to the sites of the first wells using the new and improved hydraulic fracturing techniques.

Turns out this was the key to making a previously unprofitable play into one of the most prolific oil resources on the planet.

By 2010, production from the Bakken shale had nearly doubled...

In 2014, it hit 1 million barrels per day and hasn’t looked back since. 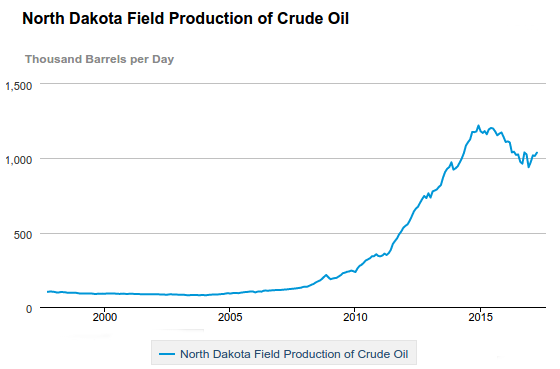 Now, it wasn’t that companies had stumbled upon a whole new oil source. That crude had always been there, just barely out of reach.

It was the improvement of hydraulic fracturing techniques that made the U.S. shale revolution possible.

Conventional drilling goes like this: you drill straight down, pump the well till it’s dry, then move along to the next project.

This leaves potentially millions of barrels of oil untouched... and billions in profits in the ground.

Unconventional shale fracking is much more thorough — a combination of horizontal drilling and a few tons of pressurized frac sand and water get the job done much faster and, more importantly, cheaper than ever.

But while U.S. shale was taking off, our neighbors to the south were sliding into oblivion.

I’m a little jealous that I didn’t get to this new play first.

This time, it was my colleague Christian DeHaemer who spotted signs of movement in a place no one would’ve thought to look: the nearly abandoned oil plays of Mexico.

In case you don’t know the story, here’s a little recap...

Back in the roaring ’20s, Mexico had its own oil revolution.

Production from the country’s largest basin topped 529,000 barrels per day in 1921. At the time, that covered nearly 25% of the world’s total oil supply.

But it was all downhill from there.

You may remember my point from earlier this week: even in times of excess, producers need to be constantly on the lookout for new supply. This is especially true if all they need to get it is better drills.

Production from the play fell sharply and, by 1940, was just a fraction of that peak. By 1980, it was practically nonexistent, and it has been stuck that way... until now.

On Wednesday, we got word that Talos Energy, along with Sierra Oil and Gas and Premier Oil, discovered between 1.4 and 2 billion barrels of oil off the coast of Mexico.

Earlier discoveries by Italian Eni SpA, which in 2014 drilled one of the first foreign wells in the area in more than 70 years, confirmed that the long-lost production capacity of Mexico had finally been re-tapped.

Now, the race is on.

Foreign investors can finally get their hands on a piece of Mexico’s own Bakken-sized shale play. The bidding wars have already begun.

And thanks to Chris’s research, we’ve got a head start.

Last year, during the first round of auctions for Mexico’s offshore shale, this tiny company claimed a few prime acres of this newly tapped play for itself.

Of course, it’s not the size of the block that matters.

What this company has over the competition is expertise in the drilling technology that put the U.S. on track to be a top oil and gas producer in a few short years.

Even better, Mexico already has some of the lowest production costs in the world.

The country intends to be producing as much as 3.5 million barrels per day within the decade...

That means there’s even more money to be made for this tiny company, which will be known as one of the first on the scene of Mexico’s oil revival.

If you’ve ever felt like kicking yourself for missing those early U.S. plays, don't repeat the mistake here.