Everyone knew it was coming... but nobody thought it would happen quite so soon.

The crossover took place only a few months ago, and already both countries are heading in opposite directions.

U.S. oil imports are decreasing for a number of reasons: Some point to increased vehicle efficiency, while others say it's nothing more than signs of a weak economy. And then there's the group that says it's due to low U.S. demand.

I'll agree with the first two, but I'm unconvinced U.S. demand is plummeting.

The fact remains the United States is far and away the largest oil consumer on the planet.

As you can see, our demand has been relatively flat for decades:

On the other hand, China's demand is spiking at an alarming rate: 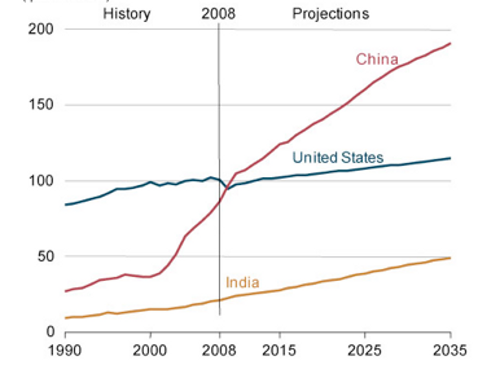 And this isn't even the most disturbing part of China's oil future...

You see, U.S. oil imports are pretty stable — that is, most of those barrels come from relatively stable ares. According to the EIA's stats, our top sources of oil imports are Canada, Mexico, and Venezuela. The latter two may not inspire much confidence, considering Mexico's Cantarell field has peaked and Venezuela's supplying us with poorer quality oil, but they're both happy to have the U.S. as their largest customer.

China isn't so lucky. Almost half of China's oil imports are shipped from the Middle East. China's crude imports from Iran rose by 81% in February, a red flag if we've ever seen one.

And China faces a snowballing demand from here on out... 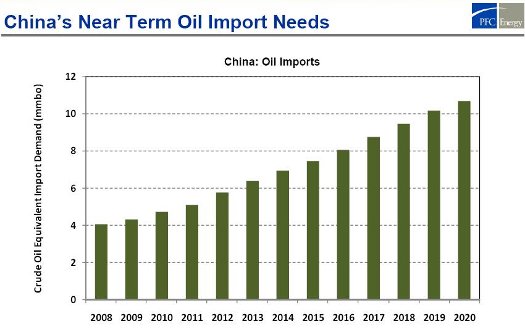 Here in the U.S., we've managed to curtail our debilitating oil addition.

We've had to — our domestic oil production started spiraling downward in 1970 with no solution in sight.

So, what's the secret to our success?

No, the real prize for the Chinese is technology.

As a regular reader of these pages, you've heard of the billions of dollars pouring out of Asia and into unconventional oil and gas that's become so prominent in recent years. And it's become obvious that the Chinese are scrambling to shore up future energy supplies. Quite frankly, that's the only option available to them — at least, until they're able to economically tap their own massive shale deposits.

The only way we'll continue lowering U.S. oil imports is by increasing production. And that's no small feat.

Is this a moon shot? Perhaps. But it seems entirely possible — probable, even — when we see nearly every oil and gas company operating on U.S. soil taking advantage of pad drilling.

And that's where our edge with technology comes in...

The now-famous shale plays in the U.S. didn't spring up overnight. It might feel that way, considering the years it took for the mainstream media to pick up on this story, but companies have actually spent decades improving drilling and completion technologies.

With each new well, they're perfecting a technique to extract oil and natural gas from North American shale formations. In some areas like the Bakken Shale, they've already mapped out the sweet spots... now it's just a matter of driving down costs.

Of course, China will continue to cling to the hope that someone is willing to share crucial drilling technology with them at some point.