From Goats to Glory: The Monster Oil Discovery Nobody Is Talking About

It’s not a stretch to say that you and I owe him a huge debt of gratitude for the role he played in shaping America’s meteoric rise as a global energy powerhouse.

Still scratching your head? You see, Floyd was a young engineer working for Stanolind Oil in back in the 1940s. Together with a man named Bob Fast, the two developed a technique that would have incredible consequences for America’s oil and gas production.

The idea was simple and straightforward: increase the oil and gas production of a well by providing lateral drainage channels in selected rock formations underground.

This was essentially the birth of hydraulic fracturing as we know it today.

Now, keep in mind that fracturing the rock underground to stimulate production wasn’t a new idea. Drillers had been using explosives for this purpose dating back to the Civil War.

Then in 1947, Floyd got a chance to test his new “hydrafrack” method.

That morning, workers rolled up to the No. 1 Klepper well, which had been drilled in the Hugoton gas field in southwestern Kansas, and treated it using a thousand gallons of napalm and sand. 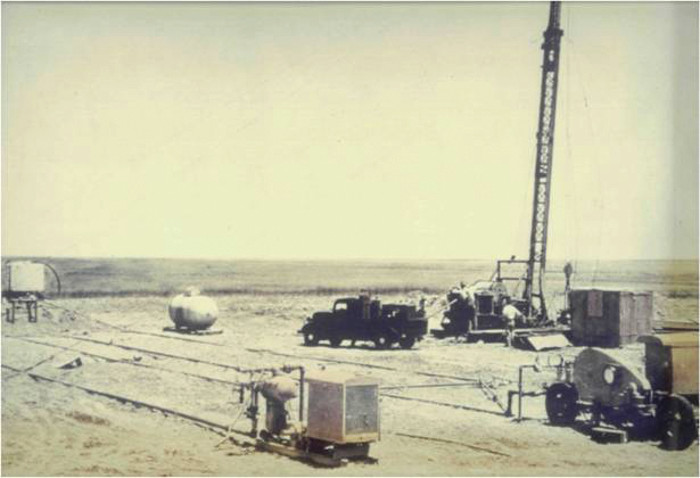 As you might guess, it was a huge success. It proved that not only could it revitalize older wells, but it could also boost output from newer wells, too.

But it wasn’t until about 30 years later that the son of a goat herder took Floyd’s idea to the next level.

From Goats to Glory: The Monster Oil Discovery They Aren’t Talking About

Although you may not have heard of Floyd Harris, there’s a better chance you’ve heard of George Mitchell.

I know my veteran readers have been aware of his pivotal contributions to our oil and gas industry for a long time.

The son of a goat herder in Arcadia that immigrated to the United States in 1901, Mitchell was instrumental in unlocking the tight rock in the Barnett Shale.

Through his company Mitchell Energy & Development Corp., George Mitchell believed he could tap into the massive natural gas resources tightly trapped in the shale rock.

The secret to his success was experimenting with both horizontal drilling and hydraulic fracturing. Unlike Floyd, George didn’t use napalm, but rather a mixture of sand and water to stimulate his wells.

His pioneering work kick-started an unprecedented energy boom in the Lower 48.

But to hammer home just how much George Mitchell’s work has transformed the U.S. oil and gas industry, let me show you how vital horizontal well production has been for us:

Within a decade, we went from a country hopelessly addicted to OPEC oil to exporting more crude than all but Saudi Arabia.

You see, now that drillers are able to utilize this technology, new plays are opening up that nobody was expecting.

Recently, my readers and I came across a company that revealed it is sitting on billions of barrels of crude oil.

Did you miss this monster oil discovery?

This oil stock trades at a fraction of what investors are paying for companies like ExxonMobil, Chevron, and even major independent players like Pioneer Natural Resources.

And these guys are ripe for the picking.

After watching Occidental drop $55 billion to acquire Anadarko Petroleum, it seems as if it's only a matter of time before Big Oil makes its move.

When that happens, the sky is the limit for investors holding shares in this driller.

I can only give you the details behind this off-the-radar investment.

The next step is up to you.