Opportunity for 10% Gains in 3 Days

I see a great opportunity to make a fast and easy profit in the gold market right now.

Over the next three or four days, I think we can see several +10% gains.

Buy gold stocks today and tomorrow ahead of the Federal Reserve's FOMC meeting.

No one is expecting the Fed to move its benchmark rate. So Main Street investors and institutions are likely doing two things right now in anticipation of a dovish announcement on Wednesday:

And while they're doing that, we should be buying gold.

That's because after the Fed makes the final announcement on Wednesday, the dollar longs will “sell the news,” and the short pressure will come off of gold.

And that'll leave gold prices nowhere to go but up.

This exact scenario just happened during the March 15th and 16th FOMC meeting. Take a look... 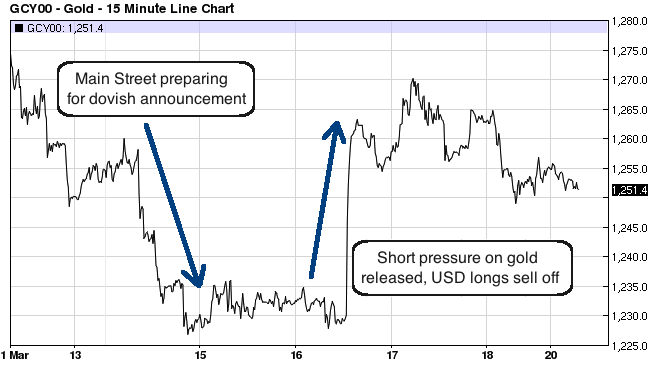 No one was expecting the Fed to move interest rates at the March 16th FOMC announcement. As a result, gold prices shed about 2% in the two days before the announcement.

Immediately following the announcement, short pressure on gold prices was released, and USD longs left the market. Subsequently, gold prices snapped back up.

And the short of it here is this...

I think the same thing is going to happen this week. So I'm buying gold today and tomorrow on dips and will be looking to sell on Thursday for several fast gains.

Here are three stocks that I think could each see a 10% gain by the end of this week...

I think we'll see a bit of a dip today and tomorrow, which could push the stock near $16.00. That would be a great entry point to look for a 10% gain by this Thursday (April 28).

I think selling pressure could put GFI at $3.50 through today and tomorrow. And I think that would also be a great entry point to look for a 10% gain by the end of the week.

But I would stick to the $3.50 price target for GFI. If shares dip that low between now and tomorrow, pick some up. If not, leave it on the table.

Shares of NGD may have sold off a little more than they should have at the end of last week — closing on Friday at $4.34. I actually wouldn't mind owning this stock at $4.20. From there, I think we could see a gain a little higher than 10% nearing the end of the week.

These ETFs are designed to track the overall performance of the gold mining industry and were quite popular during the height of gold prices back in 2011.