Why Exxon is a Sucker's Bet

It was alive and well for the past eight years, and rest assured, dear reader, it’ll be here for the next four as well.

Don’t think for a second that the folks over at Goldman Sachs (NYSE: GS) and ExxonMobil (NYSE: XOM) aren’t beaming with excitement now that President Trump has been sworn into office. For them, crony capitalism is an asset. But for the rest of us serfs and peons, it’s a liability.

As an investor, you need to be aware of this, too. Because while a select group of very wealthy individuals over at ExxonMobil are going to get stinking rich, it doesn’t mean you will, too.

You see, when it comes to the energy game, the spoils of crony capitalism don’t always trickle down to investors. And in the near term, this is likely to be the case for ExxonMobil.

Not in Time for Earnings

While former ExxonMobil CEO Rex Tillerson is an incredibly smart man with a strong loyalty to the company that made him a billionaire, it’s unlikely that Exxon stock is going to enjoy what many have referred to as an obligatory pop.

How could ExxonMobil investors not be bullish on a company that now has a direct line to the White House?

Although I expect to see Tillerson’s influence in Washington ultimately trickle down to Exxon shareholders, I wouldn’t be in a hurry to load up the boat just yet.

While I’m sure there are big things planned in terms of special favors for the oil giant, those “big things” won’t develop overnight. Whether it's a sweetheart deal with the Russians or a new round of “incentives” designed to favor the company, these things won’t unfold before Exxon announces earnings on January 31.

Of course, that doesn’t mean Tillerson’s new position in the Trump administration isn’t enough to motivate investors to buy shares in anticipation of all the goodies Rex Tillerson will deliver for shareholders. I know plenty of folks who’ve been loading up the boat based on nothing more than Rex Tillerson being the new Secretary of State.

Yes, this is clearly a bullish indicator for ExxonMobil. But there’s a bearish indicator that should concern XOM investors in the near term.

The Demise of Internal Combustion

If you divert your attention away from Rex Tillerson, you’ll find that Exxon is currently trading at a 50% premium to its peers, while there’s no indication that earnings are likely to be anything other than a disappointment.

Looking at the projections of 22 separate analysts, the mean price target on Exxon is about $88. The good news for XOM investors is that if earnings do disappoint, it’s unlikely the stock could fall much below $78. If, by some surprise, Exxon delivers positive earnings, the stock could hit $90 again. But here’s the thing...

If you’re trying to make money — I mean real money, not just a gain of 8% to 10% — it’s not even worth buying shares of Exxon. The upside is minimal.

Truth is, energy investors would be wise to bypass Exxon altogether and find something with a bit more credibility for long-term profit potential.

Even with a Trump administration that’s incredibly bullish on the reinvigoration of oil, that bullish sentiment must compete with the reality that we are at the dawn of the transition away from the conventional internal combustion engine.

As reported by Bloomberg, forecasts from the IEA indicate that global gasoline consumption has all but peaked, as more efficient cars and the advent of electric vehicles are going to halt demand growth in the next 25 years.

That shift will have profound consequences for the oil-refining industry because gasoline accounts for one in four barrels consumed worldwide.

The cresting of gasoline demand shows how rapidly the oil landscape is changing, casting a shadow over an industry that commonly forecasts decades of growth ahead. Royal Dutch Shell Plc, the world’s second-biggest energy company by market value, shocked rivals when a senior executive said overall oil demand could peak in as little as five years. 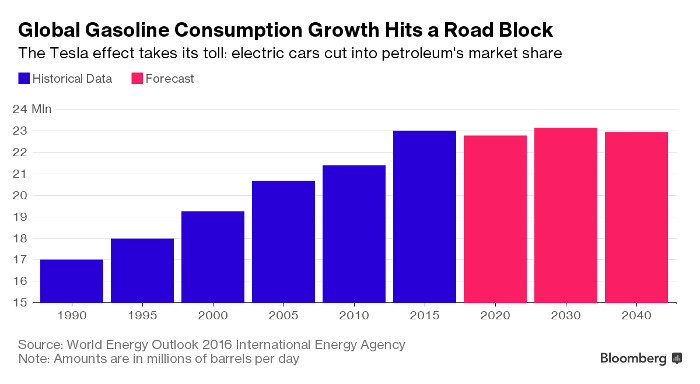 At the moment, we know investors can still make money in the oil game. But over the long term, there are just much better investments to make in the transportation sector. Electric cars represent one — or more specifically, the materials that are used to make electric cars.

Certainly you could always buy shares of Tesla (NASDAQ: TSLA) to get exposure to this space. And it's worth noting that 2017 price targets for Tesla are much higher than what we’re seeing with ExxonMobil.

But you’re likely to get more bang for your buck by investing in the components and materials that are making it possible for electric cars to go mainstream.

There’s some interesting data on this here.

In the meantime, don’t let the excitement over Rex Tillerson’s new job as Secretary of State dissuade you from the meat and potatoes of ExxonMobil. It’s no doubt a global behemoth that’s got plenty of life left in it. But rest assured that its dominance is contingent upon one thing: the reliance on an outdated technology known as the internal combustion engine. And that reliance, dear reader, is going to come to an end a lot faster than you might think. Invest accordingly.