European politics have created a unique trading opportunity in gold.

But to take advantage, you need to act now because everything goes down in three days!

But the mainstream media is downplaying the fact that this election will do nothing less than determine the future of France's participation in the European Union... and very possibly the future of the euro and entire EU at large. Its importance truly can't be overstated. Le Pen has promised a "Frexit" referendum within six months of winning the presidential election.

Now, French polls currently show a 60/40 public favor for the mostly pro-EU Macron. And the large European financial institutions are betting on these polls by going long on the euro and shorting gold on an incredible level.

There's little doubt these short positions are responsible for recently pushing down gold prices. But here's what's going to happen...

Immediately following the results of the French election, we can expect these short positions to be covered and the downward pressure on gold prices to be released.

In short, it doesn't matter who wins the French presidential election. The price of gold will increase after it's over simply because all that short pressure is released.

We've seen this kind of build-up in gold shorts, followed by sudden covering and a subsequent rise in prices, nearly becoming a standard ahead of U.S. interest rate hikes.

Total short positions on gold sat at 421,698 ahead of the Fed's rate hike in March. A week later, the COT report showed a +5% drop in total gold short to 399,799. Meanwhile, gold prices immediately popped nearly 2% higher and charged forward. 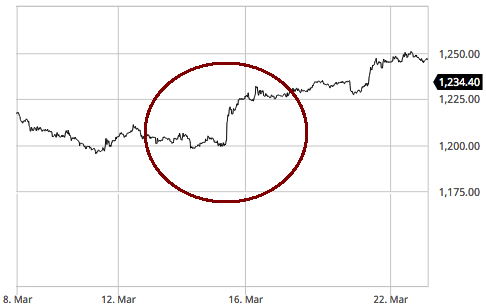 In the same way, I expect the short positions held by large European institutions ahead of the French election on Sunday will be covered, allowing the short pressure to be released and gold prices to rise immediately following the results.

Again, it doesn't matter who wins the French election. The short pressure on gold will be released once the results are final.

In the most recent issue of my Secret Stock Files advisory service, I alerted subscribers to this trade yesterday and gave several different options on exactly how to best leverage this opportunity. But I wanted to share this particular opportunity with Energy and Capital subscribers as well because it's the low-hanging fruit.

This is a very obvious trading opportunity that only comes around every so often. But members of Secret Stock Files are used to these kinds of trades. That's because I monitor changes in open positions, global interest rates, lease rates, and physical demand, among other dynamics, to find opportunities just like this. And then I show subscribers the best way to leverage the trade.

Even though it may be a little too late right now to learn exactly how to take advantage of short covering on Sunday night, there are many other less obvious opportunities we trade on and profit from just like this. Learn how to become a member today.