I’m sure by now you’ve heard all about the shiny new currency that is Bitcoin.

It's already made some huge gains this year, but Bitcoin is certainly still an attractive commodity for investors looking to hop on the profitable cryptocurrency bandwagon.

Our own Luke Burgess has noted that the creation of Bitcoin hearkens back to the original question of why we have money in the first place, and he makes a good point.

The danger of Bitcoin is that it is, in the minds of many investors, just another commodity to be bought and sold for profit. That makes its utility something of a mystery.

Another digital currency called Ethereum has seen much of the same explosive growth as Bitcoin, but with a catch: it’s actually getting used in the real world in some pretty interesting ways!

Most recently, the Ethereum blockchain has been integrated into a network of electric vehicle charging stations across Germany.

I’ll explain why Ethereum was chosen over the more famous Bitcoin for this venture in a moment. But first, let’s take a look at why this is such a big deal for EVs and the energy market in general.

Soon, you’re going to be seeing a lot more electric vehicles on the road.

You’ve already probably come across a Tesla or two on your way around town! I love to point out the shiny new Model S cars I see around Baltimore, even though they’re becoming more common by the day.

It’s still an exciting thing to see, given that the market for these vehicles was almost nonexistent before Tesla came along.

Soon, more Chevy Bolts, the company’s first all-electric vehicle, will be roaming the streets as well. By 2020, almost every major carmaker in the world is slated to have an EV for sale!

One study published by Bloomberg New Energy Finance estimates that EVs will account for nearly 35% of all new car sales as soon as 2040, and about 25% of all cars on the road by then will be electric.

There’s just one hurdle that needs to be crossed before the industry can really ramp up its engines: range anxiety.

With a gasoline car, you’d have to be pretty far afield to not be able to find a gas station of some sort. Even diesel cars have a pretty reliable network of fueling stations. 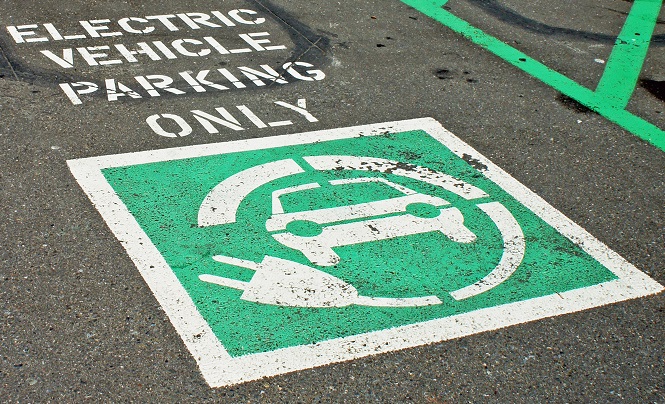 Tesla and a handful of independent companies are working on installing larger networks of public charging stations, and many public garages offer charging options for regular customers.

Tesla still has the advantage here, as its current customers have access to the company’s Supercharger stations, which can give the long-range cars an almost full charge in about an hour.

This, of course, is the next big issue: charging an EV can take ages.

But that’s just a matter of improving the technology. As EVs become more popular, any new developments that can make this process run faster will get the market up and running that much sooner.

Ethereum on the Rise

What does Ethereum have to do with charging cars?

It’s not a super quick-charging fuel, for sure, but the way this cryptocurrency works may make the expansion of EV chargers a lot smoother in the future.

In April of this year, a subsidiary of Germany’s largest provider of energy and gas, RWE, deployed a network of 100 EV charging stations that were connected via the Ethereum blockchain.

The blockchain system for many cryptocurrencies can get a little confusing, especially if you’re not a Bitcoin or Ethereum miner yourself.

But here’s the gist: Bitcoin’s blocks are authenticated one by one via individual authenticators — people with the massive, expensive rigs that “mine” the currency. Ethereum also uses a mining system, but its underlying algorithm is much faster, resolving and adding a transaction block in under 13 seconds. This makes Ethereum the better choice for companies that want to encourage fast, efficient transactions for customers.

This new EV charging system, currently being called “blockcharge,” will connect to an individual user’s Ethereum wallet, making paying for a charge almost instant! The system also helps record charge times, energy usage, and all transactions made on the network.

The accompanying app, called Share&Charge, can also help calculate the cost of charging at home.

Eventually, the company hopes to connect as many cars as possible to the system autonomously, a feat that may be more likely than you think — most new cars these days are connected to the internet in some way already.

The ultimate goal, says Stephan Tual, CEO of the startup that helped develop this blockchain network, is to create “a truly decentralized market for electric vehicle charging.”

As the EV market continues to take off, this is certainly going to be one of the biggest opportunities for Ethereum yet!

Of course, this doesn't mean there aren't still quite a few opportunities in Bitcoin if you take advantage now. Meanwhile, Ethereum's connection to the energy space gives it a distinct advantage no other cryptocurrency has managed to snag.

Keep an eye on your energy bills; that may be the next place you see this shiny new currency appear!