When Bad News is Good News

When is bad news good news?

When the bad news is that commodity prices have gotten too low to keep producers in business.

As I have written for the last many weeks, oil has descended too far below the production cost to sustain future supply. The same is true for much of the commodity complex. With the global credit markets still tight fisted, the marginal producers of oil, gas, and metals—that is, the ones who have either new or extremely difficult and expensive projects—are unable to raise the capital needed to continue. This is crushing new supply and lending pricing power to the more established producers with cash on their balance sheets. The problem is particularly acute for miners, who find it impossible to continue operating at a loss.

That means that prices have to bottom as, indeed, it seems they have. 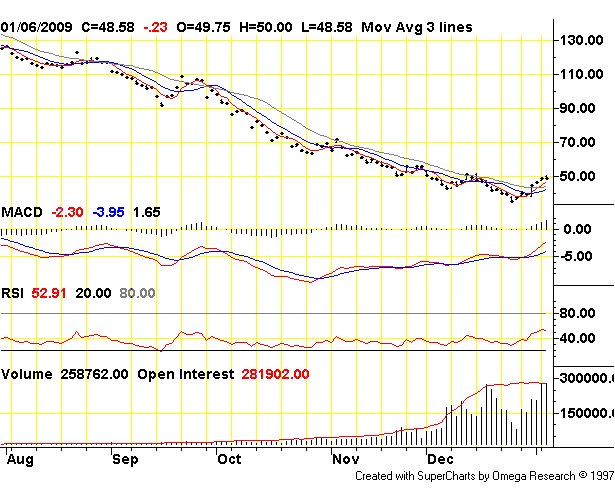 That's a 39% gain. This is precisely the signal I have been waiting for, that traders may have recognized an overcorrection and started buying again.

The continued contango of the crude futures curve is certainly giving them some confidence, with contracts pricing oil at over $80 by 2011: 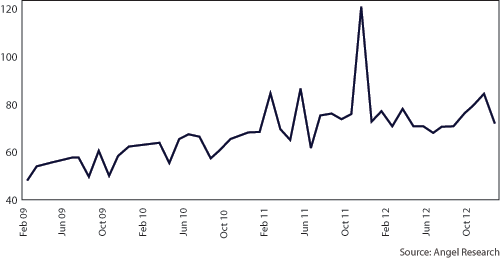 Traders clearly do not think that oil is going anywhere but up from here. A recent Bloomberg survey of 30 analysts gave a median fourth-quarter estimate of $70 for black gold.

One driver of oil's rise is that OPEC members are apparently honoring their recently announced production cuts. Combined with geopolitical concerns like Russia's annual stick-up of Ukraine and Europe, forcing them to pay much higher natural gas prices in the cold of winter, and Iran's threat to withhold oil shipments to Israel's allies over the recent conflict in Gaza, there is plenty of tension to drive oil higher.

And that's not to mention the growing concern over peak oil—the depletion of some of the world's best and most productive oil fields.

Coal has gained sharply too, giving producers like Arch Coal (NYSE: ACI) a 58% bump over the same period.

The rest of the commodity complex has surged along with energy. Wheat rose to a three-month high under "pent-up demand" according to Bloomberg, having gained 35% since its low on December 1. Corn and soybeans have likewise rallied.

Fertilizers are anticipating increased buying as well. Dow Jones reported yesterday that "if fertilizer purchases don't pick up within the next month, the pipeline will be unable to move enough nutrients to the fields to provide crops with maximum yield capability." No doubt farmers have held off purchasing their fertilizers until the last minute while prices have been falling, but that minute has arrived.

In response, stalwart fertilizer stocks like The Mosaic Company (NYSE: MOS) have gained 27% since the beginning of December. For those who prefer to play a basket of agricultural plays, ETFs like the PowerShares DB Agriculture Fund (NYSE: DBA) have gained 10% over the same period.

Rounding out the commodity complex, basic building materials have been gaining too. Copper is up 25% since its December 24 low, and cement giant CEMEX (NYSE: CX) has jumped an astonishing 146% since its November 21 low, to $10.55.

The breadth and strength of the commodity rally suggests to me that the sector bottomed in November-December. We may see some pullbacks from here, after such a quick and strong rally in a bear market; but, unlike the terrifying dips we saw in the past few months, when it seemed like the floor had just fallen away into darkness, those will be buying opportunities for the long haul.

My article from Christmas Eve, the day that crude bottomed out, ended with this: "The buying opportunity of a lifetime is upon us. All we have to do now is wait for the right moment to pull the trigger." I didn't know it at the time—a bottom is only a bottom in hindsight—but now I think that was the moment.

I am cautiously bullish once again on the whole commodity complex. I am not saying anybody should put all of their money back on the table at this point because bear market rallies are dangerous. But I do think the time is ripe to take partial positions, dip a toe or even a whole foot back in the water, and see how it feels. You can always "average up" from here, with as much headroom as these investments now have. For more suggestions on some of my favorite picks in commodities, please see the archives.

The next leg up in commodities has begun. We now have an opportunity to make up all that we lost in 2008, and then some, even as the rest of the market continues to fall or trade sideways. Don't miss it!

P.S. The way I see it, investors have two choices. They can either sit in fear on the sidelines, too afraid of this financial crisis, or they can begin securing their future wealth from these enormous buying opportunities. I know for a fact your fellow readers are taking advantage of this bear market and are on the verge of making their next move.