Efficiency: The Way to Close the Renewables Gap

With peak oil already upon us, sustaining oil supply is akin to running up the down escalator.

Or, as Nate Hagens put it at the ASPO peak oil conference earlier this month, "Technology is in a race with depletion and is losing (so far)."

The urgent question then is: Can renewables fill the gap of oil depletion?

The most recent global data summarized by fuel available from the EIA is, unfortunately, for 2006 and only preliminary (I know they're trying to improve their reporting, but seriously — they need to do better than that). But we'll use what we've got. . .

In 2006, the total amount of energy the world consumed was 469 quadrillion BTUs, or quads.* Charted in percentage terms, the global fuel mix looks like this: 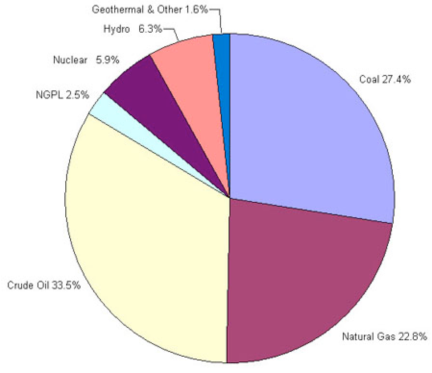 If the latest information I gathered at the ASPO peak oil conference is correct (and I think it is, or at least as close to, correct as anybody is going to come at this point), then we should expect oil to begin declining at about 5% per year, starting around 2012-2014.

The "Geothermal and Other" category — supplying 1.6% of the world's primary energy — represents all the renewable sources combined: geothermal, solar, wind, biomass, and so on.

Since 1.7% is very close to 1.6%, we can put the challenge of substituting renewables for oil this way: Starting around 2012-2014, we will need to build the equivalent of the entire world's existing renewable energy capacity every year just to replace the lost BTUs from oil.

Fortunately, renewable energy of all kinds is enjoying a massive growth spurt, attracting trillions of dollars in investment capital. On average, the sector seems to be growing at about 30% per year, which is phenomenal. . . but it's not 100%.

In terms of BTU substitution, then, it seems unlikely that renewables can grow at the necessary rate.

However, the challenge is more complex than mere BTU substitution.

Replacing the infrastructure, particularly transportation, that's based on oil with one based on renewably generated electricity will in itself require energy — and lots of it. As Vail pointed out, between 80% and 90% of the energy inputs for renewables must be made up front, before they start to pay any energy out.

Even if renewables were able to make up all of the lost energy from oil, still more would be needed to afford any economic growth.

In all, it seems a fair bet that it will take at least a decade for renewables to merely catch up with the annual toll of oil depletion. The gap will likely manifest as fuel shortages in the OECD, when the developing world outbids it for oil, and a long economic recession or depression. . . unless efficiency comes to the rescue.

To that point, Jeff Vail, an associate with Davis Graham & Stubbs LLP, said at the conference that population increase alone could offset as much as 30% of the improvement in conservation and efficiency. He noted that despite the recession, car sales are up 29% in India as people buy their very first cars.

Another driver of the down escalator is that the net energy (EROI, or energy returned on energy invested), of nearly all fossil fuel production is falling.

Simply put: As the quality of the remaining fossil fuels declines, and they become more difficult to extract, it takes more energy to continue producing energy.

This begs the question: What EROI must the replacements have to compensate for oil depletion?

For a sense of how reasonable those assumptions are, we must turn to the academic literature — since no business or government agency has yet shown any particular interest in EROI studies (much to my dismay).

[A quick aside: The huge range of the nuclear estimate is one indication of how difficult it is to accurately assess the costs of nuclear, which is part of the reason I still haven't written the article I know many of you are hoping to see some day. I'm working on it, and still looking for current research with appropriately inclusive boundaries and updated numbers. Nearly everyone is still using cost estimates that predate the commodities bull run, not even realizing how it distorts their analysis. So far, I have found nothing to change my outlook that the nuclear share of global supply will stay roughly the same for several decades.]

I am not aware of any studies on the EROI of biomass not made into liquid fuels. For example, methane digesters using waste, landfill gas, and so on. . . but its sources and uses are so varied that if the numbers were available, they probably wouldn't be very useful. While such applications are generally good, they're not very scalable: They work where they work, and don't where they don't.

Where EROI analysis leaves us is unclear; it needs more research and a great deal more data. There are some useful clues in it, though.

First, we know that biofuels — at least the ones we have today — won't help much, other than providing an alternate source of liquid fuels while we're making the transition to electric.

But here's the rub: The lowest EROI source, biofuels, is the easiest to do, with the vigorous support of a huge lobby and Energy Secretary Chu himself. Rooftop solar is the next-easiest to do. . . but making up the lost BTUs takes longer, due to its moderate EROI. And the source with the highest EROI, wind, is the hardest. (I explained why solar is easier here.)

Therefore I propose the following, slightly snarky Theorem of Renewables Substitution: The easier it is to produce a source of renewable energy, the less it helps.

All of these factors — the declining supply, the pressures of the developing world on demand, the renewables gap, and the theorem of renewables substitution — underscore how crucial efficiency is to addressing the energy crisis.

They also underscore how profitable the entire energy sector will be for many years to come.

With supply maxed out, and demand at the mercy of a developing world, the name of the game now is doing more with less. More efficient vehicles and appliances, building insulation, co-generation. . . and all the other ways to eliminate waste.

I know it doesn't have the sex appeal of oh, say, space based solar power. . . but it's where the real gains will be made.

P.S.  Regardless of how the renewables solution plays out, one thing has become blatantly obvious to traders: the longer you sit out, the more you stand to lose. However, trading in today's market can get downright frustrating. . . unless, of course, you're following Ian Cooper's advice.

Right now, his Pure Asset Trader members have been crushing it all year, trading with a 94.2% success rate! It doesn't get much better than that, dear reader. In fact, he's closed 5 winners in the last two weeks alone! And I would be remiss if I didn't offer the rest of my readers the same chance to join Ian's success. Just click here to learn more about this opportunity.

Editor's Note: This article is Part 3 of a series of Chris's reports from the 2009 ASPO Peak Oil Conference. See also Part 1 and Part 2.

* The thermal values (heat content) of various fossil fuels are typically measured in BTUs. One BTU is roughly equivalent to the heat produced by burning a wooden kitchen match. One cubic foot of dry natural gas contains approximately 1,031 BTUs. For those who prefer their data measured in joules, 1 quad = 1.055 exajoules (EJ, or 1018 joules). Renewable energy, however, is typically measured in kilowatt-hours (kWh), or the amount of energy delivered by a one-kilowatt source over the course of an hour. 1 kWh = 3412 BTUs.