An Easy Double on a Ten-Cent Copper Play

You would never have guessed it by the way he looked, but this guy was loaded.

Wearing a wrinkled Grateful Dead t-shirt, a pair of tan cargo shorts, and a smug grin, Tony T. approached me last Saturday at the Midwest Cannabis Cup in Clio, Michigan, with all the enthusiasm of a kid in a candy store.

If you’re unfamiliar with the Cannabis Cup, this is a huge cannabis advocacy event put on by High Times magazine.

These events are for cannabis enthusiasts, advocates, and folks just looking to have a good time. But Tony was there for more than just a “good time.” Tony was there because he knew I was speaking at a special investment seminar that afternoon.

The title of my presentation was "Investing in Cannabis: Creating Wealth While Ending the War on Drugs," and Tony showed up early.

Turns out Tony started following my advice back in January 2015, when I recommended buying shares of Hannon Armstrong (NYSE: HASI). Hannon Armstrong is a renewable energy REIT. Since then, the stock has risen about 71% and has delivered steady 5% dividends along the way.

While Tony has certainly enjoyed those regular dividends, it wasn’t actually his position in HASI that allowed him to buy a new winter home in Hawaii, where he now spends his winters fishing and tending to his small pineapple farm.

And that’s not the only major score Tony’s sitting on, either.

From Cannabis to Copper

If you’re a regular reader of these pages, you know that I’m incredibly bullish on the legal cannabis market. I’ve even written a special “Beginner’s Guide to Cannabis Investing” for Energy and Capital readers, which you can access here.

Without a doubt, legal cannabis stocks have been my main priority over the past couple of years. There’s just so much money to be made in this space that it would be absolutely asinine to not have some exposure to it right now. And if you don’t believe me, feel free to check out some of the numbers for yourself, which my team has compiled in this “Introduction to Cannabis Investing” video.

But despite the huge gains we continue to see in the legal cannabis space, we also remain committed to profiting from the ever-changing landscape of energy markets. In fact, just last week I recommended a new stock to members of my Green Chip Stocks community that allows them to get a piece of the booming electric vehicle market by investing in something that’s very common to all of us: copper.

A Cash Crop of Copper

There’s no doubt that the electric vehicle segment has been a huge boon for materials manufacturers and mining companies. In fact, there are a number of mining companies that are now relying on electric cars for their bread and butter. This is especially true in the lithium space, and even copper producers are now looking at electric cars as a major instigator of growth.

Over the past year or so, copper prices have started inching back up. But if you look at a six-year chart, the price of copper is still about 43% off a record high of $4.53 back in February 7, 2011. 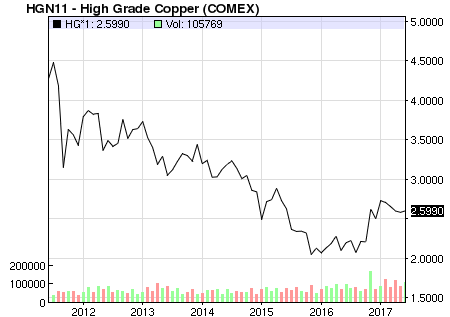 The truth is, copper has seen better days. But with the rapid development of the electric car market, copper prices have a very good chance of getting a much-needed boost over the next few years.

The bottom line is that if you find the data on electric vehicle growth to be sound, then you likely see a catalyst for increasing copper prices.

Now, there are any number of copper stocks in which you can invest. But given the growth potential of copper over the next five to 10 years, I’m looking to have very well-diversified exposure to the space by owning shares of the major players as well as some of the up-and-comers. It’s the latter, by the way, where there’s the most profit potential for serious energy investors.

One in particular is a small outfit operating in Montana. Well capitalized and sitting on 140 million pounds of the second highest-grade copper currently under permit in the world, this copper producer is my latest addition to the Green Chip Stocks portfolio, which you can read for yourself when you become a member today.

I’m expecting the stock, trading around $0.10, to more than double by the end of the year, for reasons I’ve outlined in my June 23rd investment note. Don’t sleep on this one. Because just like the huge gains we’ve pulled in from the legal cannabis market, we’re about to do the same by tapping the copper producers that are in for one hell of a profitable ride thanks to the continued and rapid growth of the electric vehicle market.