I distinctly remember packing up my beat-down Chevy for a second cross-country road trip.

It was two years after my first foray to the Canadian oil sands and I had caught another itch to travel. Thankfully, an opportunity presented itself.

At the behest of one of my more enthusiastic readers living outside Kern County, I decided to take up the offer to get a firsthand look at our third largest oil-producing state.

He was overly excited after news about a huge oil discovery by Occidental Petroleum.

I had my doubts.

In fact, it felt that Kern County's largest oil discovery in 35 years was more of a flop.

Still, the chance to be back on the open road was worth it...

Trying to sneak out of my office that morning, I saw my cohort — the very same that had joined me on my trek to Fort McMurray — hopping into the passenger seat.

He was just as eager as I was to leave the home of Natty Boh behind, so we rolled out of Baltimore with the sun barely touching the horizon and oil fresh on our minds.

We didn't even make it half way before fate knocked us flat on our backs.

Slightly more than 70 miles outside of Shreveport, Louisiana, a hand vigorously shook me. Thinking he was trying to end his driving shift early, I wasn't too thrilled to learn the reason he was waking me.

Trying to hide his Cheshire Cat grin, he apprised me of the situation with a hint of amusement.

“Got some bad news. We're out not even in Dallas yet and we're dead in the water.”

Bad news, indeed. It was the first time my Chevy failed me... but it wouldn't be the last.

Only twenty or so hours into our sojourn to The Golden State and it was still pitch-black outside. We were right outside Kilgore County, and the thought of getting a tow at 4 a.m. wasn't pleasant.

Unbeknownst to me at the time, that flat tire proved to be a very good omen.

You see, we had broken down in the crown jewel of the U.S. oil industry: Eastern Texas.

If Edwin Drake is credited as being the first to drill for oil in the United States with his operations outside Titusville, Pennsylvania, then it's not too far-fetched to consider Spindletop, Texas, the birthplace of modern U.S. oil production.

And as we're all perfectly aware, oil is still king for U.S. energy consumption. To think otherwise would be foolish. Believe me, there's a reason we're using more than 19 million barrels of it every day...

Unlike the Peak Oil 'Race to the Bottom' competition between Alaska and California, Texas is the only state now that can produce more than a million barrels per day. The state alone makes up 20% of total U.S. crude production.

Below, you can see a very slight up-tick in production during the last two years:

That's about as good as it gets for our top three oil producers.

Not too comforting, is it?

Fortunately, Texas has a much better position.

During the two-week trip to see Kern County's oil flop, the night we broke down in Kilgore stuck with me most. And lately, that flat tire has been coming back — but not to haunt me...

If you took out a map today and pinpointed the area of my flat tire, you'd find that about 60% of all drilling rigs in the U.S. take place within a 500-mile radius of that spot.

Even though North Dakota has been making huge waves from its success in the Bakken formation, East Texas is still the epicenter of U.S. oil.

You'd think it'd be a perfect place to operate. Actually, it is.

Normally, I'd be more than willing to serve up the drilling stocks worth your attention. Today, however, I want to show you a different way to invest in these shale oil and gas plays.

If you remember, we looked at one of those plays in particular: Carbo Ceramics.

Performance-wise, it doesn't get much better. After all, Carbo seems to have a hand in every single major shale basin that I've come across. Those of you familiar with the company know that it provides ceramic proppants that shale drillers can use in place of sand to boost efficiency.

What's the consequences of having such a hand to play? 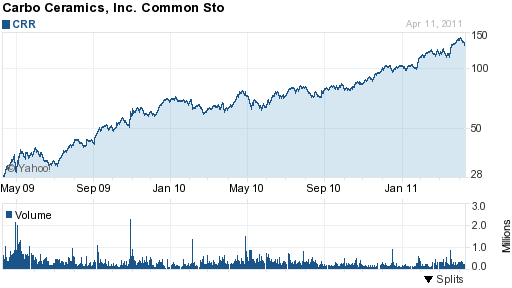 It doesn't get much prettier than that for oil bulls — returning investors more than three times their money since oil prices bottomed in December 2008.

Despite the $132 per share price tag that's attached, there's still a strong upside. They don't have to worry about leaseholds or the troubles of having a rig break down in the middle of the night. They've proved to be a great way to play a way for those shale drillers to increase productivity.

And their story isn't unique.

You see, not only did Carbo Ceramics improve upon their productivity; now they can also stake out a piece of shale wells across the United States.

Carbo reminds me of another company that has been quietly operating in Canada, perfecting its technology.

Their fracturing technique is starting to attract a lot of attention — especially considering it offers those shale drillers an alternative to hydraulic fracturing.

With access to the U.S. shale market, it could easily break wide open in 2011.

And of course, that company just set up shop in Kilgore, Texas.

Lead Gen Report: Google Is Back
Last week we started getting a lead foot in last weeks race, avger