It's been a pretty dismal year for natural gas prices.

The glaring supply glut in North America has sent analysts scrambling to call a new bottom.

Even the small rally at the beginning of last summer couldn't stop the fall... By August, prices plunged back below $4/Mcf.

Granted, prices have jumped 20% during the last three weeks: 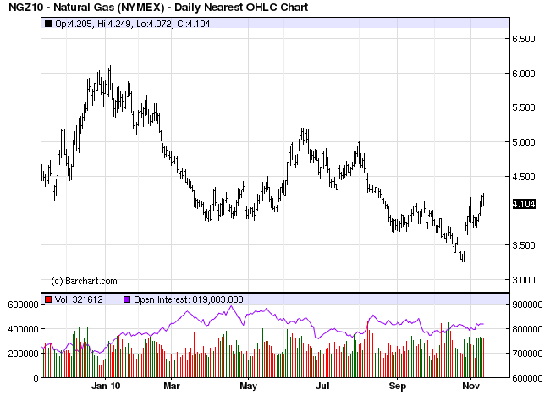 So can we finally expect a natural gas comeback?

The simple answer is not just yet. At this pace, it will take years to ease the over-supply in the North American gas market.

Much of that is thanks to the surge in shale gas development, which has boosted U.S. natural gas resources by approximately 50% since 2000.

The Energy Information Administration even projects shale gas will account for more than one-quarter of U.S. natural gas production in 2035.

But let's be honest here, we saw this supply glut coming from a mile away.

In fact the number of producing gas wells has risen nearly 60% during the last decade...

A few months ago, I asked my readers which side they were on for the ongoing fracking debate.

Judging from the mass of e-mails I received, the consensus seemed to be that it's going to happen, one way or another — no matter how vehemently you reject the process of hydraulic fracturing.

And it looks like the first battleground has been chosen: Wyoming.

Last month, Wyoming became the first state to regulate the fracking process. Companies are now forced to disclose the chemicals used in their fracking fluid.

That kind of regulation may soon spread to shale plays across the United States. Revisions being made to Pennsylvania's oil and gas law would require companies to disclose detailed information about each well.

We can expect these drillers to put up a fight, claiming full disclosure would be giving away trade secrets.

Regardless of the final draft that's ultimately adopted, we're not concerned about an overall drilling ban. Again, I think most of you were right in saying “It's only a matter of time.”

Can it be done? A future U.S. export?

Can you blame me?

My readers have simply had too much success trading those small, U.S. shale drillers. LNG hasn't even crossed their radar. And that could possibly change, but with a twist...

For the first time in almost five decades, the United States shipped exported LNG to Europe.

You heard that correctly.

Two shipments holding a total of nearly 375,000 cubic meters of LNG were shipped to Britain. (And in case you were wondering, we are able to export LNG.)

Actually, only two U.S. LNG terminals are able to re-export LNG; both the Sabine Pass and the Freeport LNG terminal are located in Texas.

Back in early September, Cheniere Energy Partners received approval by the U.S. Department of Energy to export liquefied natural gas from the Sabine Pass terminal.

Developing our LNG exports is certainly one way to help ease our supply glut. However, these terminals are built at an enormous expense, and depending on the site, costing hundreds of millions of dollars.

Of course, we also have to think of the competition...

We know that the U.S. isn't the only country enjoying a shale boom.

I've told you before that the Montney shale and Horn River Basin formations, located in Northern British Columbia, are some of Canada's best-kept secrets. And they won't be a secret for much longer.

Yet it's not the growing activity in the oil sands that has me looking at BC for my next shale play. But I'll save that for another day...

The Kitimat LNG export terminal is what has my sights set on BC. There are some familiar faces in the mix, too — namely, EOG Resources and Apache Corp.

In January 2010, Apache Corp. acquired a 51% stake in the Kitimat project, which has a planned capacity of approximately 700 Mmcf of natural gas per day.

The location of the Kitimat terminal will allow Apache to take full advantage of the 250 trillion cubic meters of natural gas — with about 10%-25% being recoverable — while tapping into Asia's burgeoning natural gas demand.