You’ve never heard of the Daisy Bradford No. 3 well before.

The Daisy Bradford No. 3 isn’t as well known as other Texas gushers like Spindletop, but it’s just as important.

Almost 90 years ago, thousands of people crowded together to watch a sight you’ll never see in today’s oil fields. 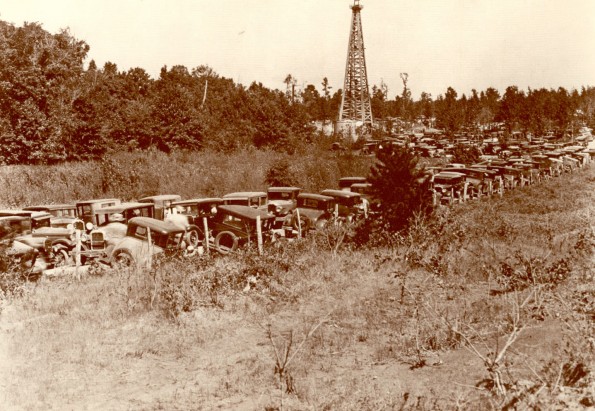 Just picture a huge pillar of black gold gushing high into the air.

It was this well that kick-started one of the most famous oil and gas fields in U.S. history: the East Texas Oil Field.

Over 5.4 billion barrels of crude from over 30,000 wells have been extracted from the field since the Daisy Bradford struck oil.

Yet there’s an interesting little twist to this story.

It’s long been known that the source rock for the East Texas Oil Field — that is, the rock that actually generated the ocean of crude beneath it — goes by another, more familiar name: the Eagle Ford Shale.

I have a good feeling you’ve heard of it before.

It’s certainly no surprise that this tight oil play is going to play an invaluable role in the United States’ oil industry.

And more importantly, the Eagle Ford region is providing several opportunities for investors like us.

Are you looking in the right place?

Since 2008, drillers in south Texas have been tapping directly into the Eagle Ford. Output reached nearly 1.8 million barrels per day before the infamous oil price crash occurred during the summer of 2014.

Production from the Eagle Ford stands around 1.4 million barrels per day. New wells in the region are producing roughly 1,500 barrels per day, which has helped make it the second largest oil-producing region in the United States. 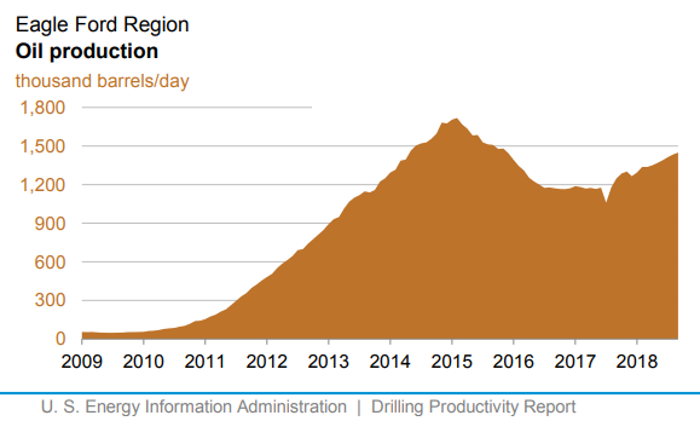 But it’s not the sizable flow of oil being pumped out of the ground that is going to cement the Eagle Ford’s place in history.

It’s the Eagle Ford’s advantageous location that should have investors sitting up and taking notice.

You see, the play also happens to be ground zero for U.S. oil exports.

Take a look at the amount of crude being exported out of the Gulf of Mexico:

As I’ve told readers before, the port district of Houston-Galveston is responsible for nearly three-quarters of the United States’ total exported volumes.

And given the upcoming crisis over pipeline capacity that is brewing in the Permian Basin, having a world-class oil play so close to our primary oil export hub is too good for individual investors to pass up.

In fact, some of the best independent drillers are operating in the Eagle Ford.

Just make sure you’re looking at the right one.

Right now, there are over 200 active operators in the Eagle Ford.

If you follow the oil sector, then names like Devon Energy (NYSE: DVN) should immediately spring to mind. Devon is one of the biggest players in the Eagle Ford, producing approximately 62,000 boepd in DeWitt County.

Yet it’s deals like these that overshadow some of the hidden Eagle Ford opportunities worth checking out.

Back in June, Oracle Energy (TSX-V: OEC) quietly made its move into the Eagle Ford Shale after entering into an agreement to purchase two assets in the play, effectively giving Oracle control of more than 6,000 net acres.

Based on the latest NI 51-101 report completed recently, Oracle is sitting on over 31 million barrels of oil and 59 billion cubic feet of gas — and that’s just from the Lower Eagle Ford formation!

Its acreage actually has several prospective zones, including additional targets in the Buda and Austin Chalk formations.

We’re talking about serious upside for Oracle, especially as U.S. oil exports from the area continue to climb higher.