The Next Step for Shale Drillers

If you ask me, there's only one place to stay bullish...

North America will be in the energy spotlight from here on out.

This isn't some optimistic domestic energy forecast; the fact is North America is the ONLY place outside of OPEC where we'll see real production growth. 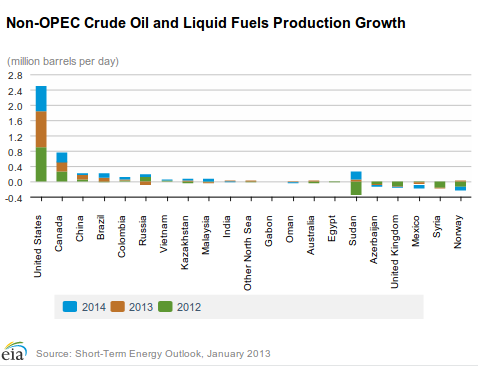 But when we stop and take a moment to look at the price tag that will come with shale development in the lower 48 states, there's a legitimate cause for concern.

How long will it take for companies to start improving the current drilling technology and lower the costs to produce these resources?

Find the Technology, Find the Profits

Last year I told you the one thing that would drive our domestic energy boom is technology. And the reasoning is simple: One of the biggest hurdles to overcome in developing our unconventional oil and gas resources is cost.

Considering how the U.S. oil industry has evolved throughout the 20th century, it's easy to see the barrels we're pumping out of the ground today are much more expensive when compared to a century ago.

We are long past the point of cheap oil. Gone are the Texas gushers and giant conventional fields. And the super-giant oil fields can't hold the production burden much longer.

During the 1980s, over two dozen of these fields were able to produce more than a million barrels per day. Today that number has been whittled down to just three!

These new fields are coming at a much higher cost...

I want to show you exactly how expensive our new barrels of oil truly are:

This surge in cost shouldn't come as a shock. Remember how long it took for shale plays to catch on? More than a decade and a half passed before George Mitchel's efforts in the Barnett Shale were rewarded.

In North Dakota, the Bakken's true potential didn't hit the mainstream until after 2008. By then, the region had already been staked out by early investors. Today some Bakken wells cost up to $12 million apiece.

And then we have the lesson from the Haynesville. One of the largest unconventional gas fields in North America was decimated from a low-price environment. As a result, activity was driven to more liquids-rich plays, causing investors to all but abandon their Haynesville exposure.

But that's about to change.

A Lesson from the Past

When Encana recently announced they were heading back into the Haynesville, the news was sure to turn a few heads.

Why should this time be any different? Natural gas prices are still well below $4/Mcf...

The answer is technology.

Encana is heading back to the Haynesville with a multi-pad drilling strategy. This allows them to drill up to six wells on each pad. Of course, utilizing this drilling innovation isn't the only area of technology that Encana excels at. They've already successfully reduced costs by switching some of their rigs to LNG.

Within a few short years, any companies not employing a multi-well pad strategy will be forced to throw in the towel.

Now, it's important to realize lowering costs is only part of the battle. Just as pad drilling is revolutionizing our oil and gas boom, the second half of the equation revolves around hydraulic fracturing.

You see, it doesn't matter in the slightest if a report is published absolving the entire hydraulic fracturing process. In the public eye, blasting a rock formation with millions of gallons of water, sand, and (to a immensely smaller extent) a specific cocktail of proprietary chemicals will likely always be demonized...

Most see if as a problem in dire need of a solution. But we prefer to see it as an opportunity...