Not a Dry Hole in Sight

“They're all spoiled... Things never used to be this good...”

His grumbling filtered through the cracked passenger window as he stood at the pump, filling up our tank. It was still about an hour and half until sunrise, and we'd stopped at a tiny Loaf 'n Jug in Minot, North Dakota.

I attributed my traveling companion's sour mood to the early hour... and the price of the regular unleaded.

This particular rant was aimed at the younger guys flocking to work the rigs that have sprouted up in North Dakota over the last few years.

“There was a time when drilling a well actually carried some risk to it,” he went on, waiting to top off.

“Nowadays, they have all sorts of gadgets and tests to make sure they're on target. I don't think any of those new roughnecks have even seen a dry hole before.”

It's true. During the early days of the U.S. oil industry, Texas drillers simply drilled near an oil or gas seep.

Even the first successful oil well in the country, the famous Drake well in Pennsylvania, wasn't supposed to be an oil well. It was initially drilled for salt brine.

Nobody's immune to the possibility of drilling a dry hole. It's always come with the territory — at least, until now...

A dry hole is exactly what it sounds like: a well that turns out to have no significant oil or gas.

Obviously, the number of dry holes will decline as technology improves, but they're more common than you might think. 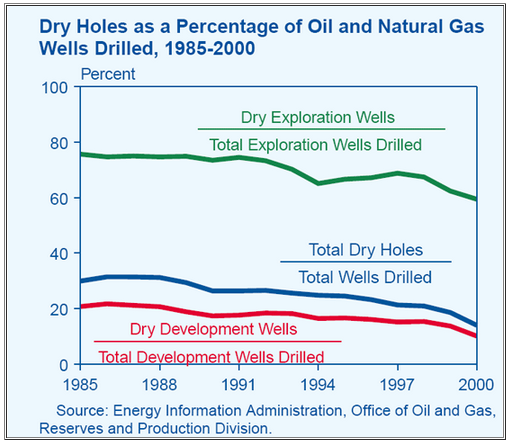 In certain areas like the Gulf of Mexico — where the cost of ultra-deepwater wells run upwards of $100 million — you want to be sure you're hitting pay dirt before you start dishing out well over half a million dollars per day for a drilling rig.

Anadarko lost a cool $20 million gamble at their Spartacus project in the Gulf of Mexico. And some of my readers will remember when Spanish oil company Repsol was snubbed off the coast of Cuba, dropping $100 million to drill an exploratory well.

But these offshore misfortunes weren't what had my friend so disgruntled that morning in the Midwest.

The same rules that have always applied to the oil and gas game don't seem to apply in North Dakota, where drillers are striking oil with nearly every well.

Their drilling success rates are as high as 99% — and even conservative estimates report nine out of every ten Bakken wells are profitable.

Makes you wonder... Is it even gambling if you win every hand?

About one-quarter of all the oil and gas rigs operating in the U.S. are located in just two places: the Bakken play in North Dakota and the Eagle Ford Shale in South Texas.

Between the two, four hundred rigs are plugging away into the soil — and it only serves to help production rates when you can't miss.

Every extra barrel of oil that flows out of these wells lessens our dependence on foreign imports.

It's enough to make the Saudis cry over lost oil.

Want to see what a 99% success rate looks like?

Not too shabby, considering that's just three counties in the state.

And Eagle Ford is enjoying the same kind of success.

But as my friend pointed out, this kind of success is spoiling an entire generation of roughnecks...

Back in the Peace Garden State, the topic eventually turned toward investments, as it usually does.

As I laid out my bullish case for betting on several developing infrastructure plays, my buddy nodded along.

But surprisingly, he was still unconvinced — even after I broke out the charts to show him why these stocks are a win-win for producers and investors alike:

“You may be okay sitting around a few years, but I'll tell you right now the big fish aren't willing to do the same..."

"Notice how they're scooping up companies and land like there's a clearance sale going on?" he asked me as we headed down the highway.

"Way things are now, that's exactly what it feels like to them.”

Just last week QEP Resources ponied up $1.38 billion to acquire 27,600 net acres in the Williston Basin — adding 10,500 boe/d to production from the deal.

I've been burning the midnight oil these past few weeks to find the best small stocks investors have an opportunity to get in on now... companies that haven't been bought up by the big fish.

I've whittled the field down to three small Bakken stocks with big potential.

Take a few minutes to learn more about them now... because these plays won't stay off Big Oil's radar much longer.