Double Your Money in This Electric Tank Stock

On September 30, President Trump signed an executive order that would guarantee increased U.S. production of the 35 critical metals used for the military as well as critical industries such as fracking and electric cars.

These minerals include rare earth minerals, most of which are currently imported from China. There are also other metals used in batteries such as cobalt and lithium.

For 31 of these critical metals, the U.S. imports more than half of annual consumption. If you think of what we just went through with the toilet paper supply chain, you can be certain that in a buildup to war, China won’t be selling us the supplies we need for drones, missiles, or even cellphones.

Let's face it — the U.S. military is going more high-tech. We have a Space Force now.

Trumps has said he has spent $2 trillion bringing the military up to speed.

He tweeted, "If Iran attacks an American Base, or any American, we will be sending some of that brand new beautiful equipment their way... and without hesitation!"

This is one of the superweapons he was talking about — the Ripsaw M5. 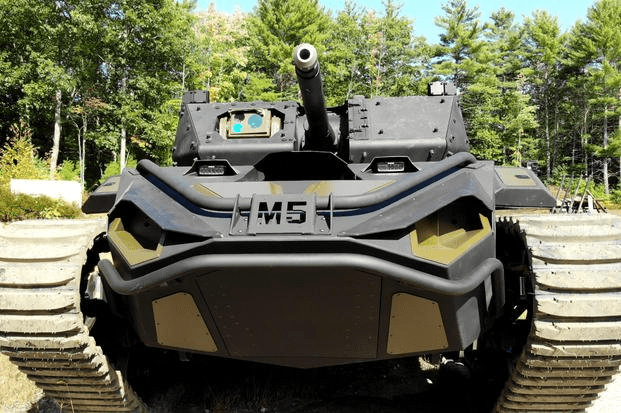 These remote-controlled robotic tanks will have artificial intelligence coupled with a 25 mm chain gun. There will also be 360-degree sensors to track the enemy. The M5 will act like a wingman to support fire teams and keep pace with armored convoys.

Textron says its Ripsaw M5 robotic combat vehicle prototype will be sent to the U.S. Army next year. It is expected to be in service by 2023.

The 10-ton beast will have two 900-horsepower hybrid electric motors and a diesel range extender with a range of 300–400 miles. Top speed is 60 mph and the electric motor means it is quiet.

That should appease the tree huggers.

It can carry a variety of cannons and an armored, weaponized drone, including a 30 mm cannon or an anti-tank missile.

Textron is a public aerospace and defense company. The stock sold off from $71 in 2018 to $36 today. This is because the airline industry has been beaten down by the double whammy of Boeing planes falling out of the sky and COVID destroying air travel.

However, if you think Trump will be reelected and travel will resume, you could double your money in Textron.

That said, there are a number of domestic rare earth and battery metal companies that could do even better. My good friend Keith Kohl has put together a list. Check it out here.