I bet you didn’t know that 0.53% of all the power plants in the United States supply over 20% of all the electricity in the U.S.

Can you guess which source of energy is pulling over 100 times its weight compared to the others?

Most people assume their electricity comes from a clean and efficient natural gas-burning plant or one of the new renewable energy sources, such as solar panels and wind turbines.

The truth is there’s a 1-in-5 chance that the power keeping your lights on, refrigerator cool, and Tesla Model 3 charged came from a nuclear reactor.

And that’s a fact.

What’s more incredible about that stat is the fact that only 55 nuclear power plants, located in 28 states, supply 20% of all the energy used in the United States. That is insane power production for such a small fleet of power plants.

To give you an idea of the scale, the most recent count from the U.S. Energy Information Administration puts the total count of active power plants in the U.S. at 10,346 utility-scale electric power plants.

If we ever want to ease the major issues plaguing Americans today, we need cheap, reliable energy and lots of it. It’s unfathomable in the United States today, Californians have to suffer through rolling blackouts each summer, and heatwaves in Texas can cause the kilowatt price of energy to grow 400%–500% in a few days.

If you’re dealing with this and looking for someone to blame, look no further than the politicians in charge of your region.

Because there’s a simple solution to all of these energy issues: It’s nuclear power.

Nuclear power has a public relations problem, not a safety problem.

Of course, I can’t really blame Americans or the large majority of Europeans for taking an anti-nuclear stance.

Ever since the United States dropped two atomic bombs on Hiroshima and Nagasaki, the world has feared the sheer power of nuclear reactions.

In many respects, these fears are justified. In the wrong hands or used with ill-intent, nuclear reactions can be extremely hazardous. Fears of another Three Mile Island or Fukushima weigh heavily on the minds of the general public. If you grew up in the U.S. in the 1960s, 1970s, 1980s, and 1990s, you’ve without a doubt have been peppered with anti-nuclear propaganda your entire life.

Anyone 45 or younger no doubt was fed a ton of anti-nuclear propaganda. Characters like the infamous Mr. Burns (“Eeexcellent”), The Simpsons' rendition of a money-hungry nuclear power plant owner, are burned into many of my generation’s memories. Two of my other favorite pieces of propaganda were these classics. The first was a poster featured in another scene from The Simpsons that went viral as a popular t-shirt. The second, of course, was the Cold War-era shelter warnings we saw in every elementary, middle, and high school we attended in the '80s and '90s. 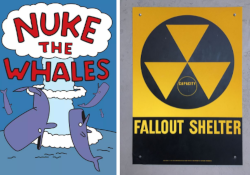 In my opinion, they only seem to highlight the negatives about nuclear power. Be it China’s recent reported leak at one of its facilities or our own government warning about stolen uranium that could one day become “weapons of mass destruction” or dirty bombs.

The truth lies somewhere in the middle because plenty of data show us just how important and useful nuclear power can be to ensure the next phase of American infrastructure growth goes smoothly and is completed.

Before we go any further, here are some powerful facts about nuclear power.

The Truth About Nuclear Power

Despite its bad reputation, nuclear power can do wonders for us as a nation and for the world as a whole.

Data and studies conducted by the World Nuclear Organization have found that not only does nuclear power produce the highest volumes of pound-for-pound energy of any power source, it’s also a lot safer than most folks actually realize.

Moreover, nuclear power is constant power, not variable like wind and solar, and it’s also economical. 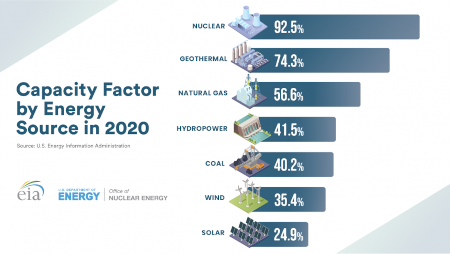 Because of these capacity differences, a typical nuclear reactor produces 1 gigawatt (GW) of electricity. That doesn’t mean you can simply replace it with a 1 gigawatt of coal or a renewable plant.

Based on the capacity factors above, you would need three to four renewable plants (each 1 GW in size) to generate the same amount of electricity onto the grid over the course of a year.

Economically, nuclear power is also cost-competitive with other forms of electricity generation, except in cases where there is direct access to low-cost fossil fuels. A place like Houston comes to mind.

Moreover, nuclear power is also becoming more viable because the system costs for nuclear power are much lower than for intermittent renewables.

Because it delivers so much raw energy, nuclear power generation is the only way we can start achieving the visionary ideas that we’re being presented with today. Visions like a world of rechargeable electric vehicles, colonizing the heavens, solving the CO2 crisis, and erasing world hunger are only possible in the near term with nuclear power.

That’s the narrative that needs to be told.

Thankfully, it appears some of our elected officials are starting to see the writing on the wall.

One would like to think nuclear power is going to make its way into Biden’s new infrastructure plan as well.

As an investor, you can position yourself to be “where the puck is heading” and at the forefront of this coming shift in energy.

Remember the word "small reactors," and click here to learn about the company poised to build these nuclear systems all across America and bring us into a new age of cheap, clean, reliable energy.