Do Liberals and Conservatives Really Agree on Energy? 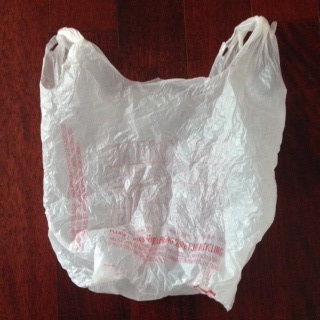 Well, I'm pretty sure this stupid plastic bag that the liberals forced me to buy has been the single best investment I've ever made in terms of percent gains.

Let me tell you the story...

A few weeks ago, I was down in Washington, D.C. While there I went to a grocery store to buy a snack and something to drink. Finishing up at the self-checkout, the machine asked me, “How many store bags did you use?”

I hit the button on the screen that said “1.”

And the self-checkout voice added $0.05 to the total.

There's a lot of this kind of nickel-and-diming going on right now — more than there was 20 years ago, at least. I've recently seen Twitter posts of folks complaining about getting charged for ice in their drinks at a bar. And I was personally surprised to see Shake Shack added $0.50 to my bill recently for whipped cream on a milkshake.

But this $0.05 plastic bag actually worked out in my favor.

See, I ended up bringing this plastic bag all the way back to Baltimore with me. The next day, I went to throw it out. But then I thought, “Wait a minute. I paid five whole cents for this bag. I'm getting my money's worth.”

Call me cheap, whatever.

So I folded the thing up and stuffed it into the pantry.

A few days later, on my walk to work, I took the bag with me to a bakery. Behind the counter working there was a young lady who I judged to be liberal.

(You want to ask me why? She looked like a liberal. Yup. And I'll defend that: Her style was not what most people would think of as a “conservative” style. Can I judge a person's politics based on their style? I don't know, you tell me.)

As she rang up a cinnamon bun for me, I told her I brought my own bag and asked if I could use it. She said, “Of course,” and gave me the total.

I put my card in the card machine, and she said, “I gave you the employee discount.”

I replied, “Wow, hey, thanks.” Then I paid for the items, thanked her again, and walked out.

Now, I'll admit, the first thing I thought was, “Did she give me that discount because she thought I was attractive?”

That was quickly followed up with the thought, “Probably not, you narcissistic, arrogant prick. Maybe it had something to do with this plastic bag here?”

Hmmm. So I tried it again.

The second time I tried it at CVS, it didn't work.

But the third and the fourth... both successes.

So far, I have taken this plastic bag out and reused it six times. Three people have given me employee discounts.

Now, I know people use reusable bags all the time. And, of course, there's a high likelihood all this is just coincidence. But plastic pollution is a huge topic for demand in environmental politics. And I honestly do believe that the people who gave me those discounts were responding to the fact that I was reusing a plastic bag, even though it was really just because I'm cheap.

So that got me thinking...

Conservative and liberal goals do not always have to conflict. I mean, hey, this plastic bag thing worked out for me. The cashiers were glad I was reusing the plastic bag, and I was glad to get their employee discount.

While their justifications may differ, conservative and liberal goals can easily align. And I think this is especially true when it comes to energy.

Consider this: Conservative ideologies are very much fiscally concerned. Conservatives don't want a lot of (if any) waste.

Generally speaking, I think most people would agree that the conservative motto for energy is “make it cheaper.”

And the liberal motto for energy is “make it cleaner.”

The conflict arises because of the assumption that cleaner energy is always going to be more expensive than dirty energy.

But that's not the case.

In many cases, the cleaner energy is already cheaper. And in the future, it definitely will be.

Right now, the conservative narrative is that the liberals want to destroy the coal industry because it pollutes too much.

And the liberal narrative is that conservatives want a cheap fuel source even if that means harm to the environment.

But here's the truth: Until very recently, coal was the cheapest way to produce energy in the United States. But in the past two years, natural gas power has overtaken coal's position as the cheapest power source.

So natural gas is cheaper and cleaner than coal.

The liberals want energy sources that are cleaner than natural gas. And conservatives want to continue using coal because...

I actually don't know why.

If natural gas is cheaper, it makes sense to use it. Let's say you're the one paying to build a power plant. Which are you going to build? Natural gas or coal?

The last time I wrote about the decline of coal mining in America, there were a few coal investors who gave me grief about it. But here's the thing: The decline of the mining industry means less coal on the market. That means higher coal prices. That's good for you!

If you own stocks in a coal miner and the price of coal is increasing (and who cares why), you're going to make out well.

This is the case with all natural resources, even natural gas. Their existence on this planet is limited. As the world begins to run out of those resources, there's no doubt they'll all become much more expensive in the future.

Whenever those resources begin to run dry, prices will go through the roof.

And when you think about it, the best possible scenario for liberals (if they want the world to stop using coal) is for coal prices to absolutely skyrocket. Much higher coal prices would prompt faster development of technology.

So maybe conservatives and liberals really do agree on energy in many cases but just won't admit it.

For me, I want to cover all the bases. I want to be a conventional energy investor and a renewable energy investor. My loyalty to any political party or ideology pales in comparison to the loyalty I have to my wallet. I'd recommend you keep your loyalties to your wallet, too.

Time to Dump Tesla
Tesla’s lead in technology has shrunk to nothing. Every car brand in the world is coming out with a luxury electric car. This Chinese company, for example, is rising while Tesla falls.
Should You Invest in Collectible Coins?
As a gold and precious metals guy, Energy and Capital editor Luke Burgess is very often asked about investing in collectible coins. But the two are completely different, so he is clearing up those misconceptions...
America’s Infrastructure Is “Garbo”
Using a new word he learned from his nephew, Energy and Capital contributing editor John Butler explores America's crumbling infrastructure. The country's energy system is utterly outdated, bridges are past due for repairs, and the money just isn't there...
Hydrogen Fuel Cells: The Downfall of Tesla?
Lithium has been the front-runner in the battery technology market for years, but that is all coming to an end. Elon Musk is against them, but Jeff Bezos is investing heavily in them. Hydrogen Fuel Cells will turn the battery market upside down and we've discovered the tiny company that is going to make it happen.