Three Stocks to Buy in a Market Slump

It seemed like a sure bet last year, a winning scenario for everyone.

And depending on its success, Cuba would have finally had the chance to meet its nearly 200,000 bbls/day addiction to crude, maybe even become an oil exporter...

Repsol decided to drill for oil in the waters off the northern coast of Cuba.

Headlines at the time hailed it as a game-changer for the country's deepwater oil exploration.

An offshore Cuban project involving a Spanish energy company using a Chinese-built rig, all paid for by an Italian service group...

How to Throw Away $175 Million

In the wake of BP's Macondo incident, everyone was so preoccupied with safety that not much thought was given to other potential showstoppers.

Perhaps the fact that Repsol failed to drill a commercial well the same year the USGS report was released was a bad omen.

It's hard not to feel a twinge of sympathy for Castro on this offshore gamble.

After all the careful planning, the hype over the billions of barrels within reach, and dreams of oil independence, all Cuba got was disappointment and a $175 million bill for their troubles.

A few weeks back, we took a look at how deep today's oil drillers are going to find new supply, which comes at a substantial cost compared to the conventional wells we've enjoyed in the past.

Despite the associated safety risks and the massive drilling costs, there's no shortage of gamblers...

Time to Ante Up

Put Repsol's debacle aside for a minute, because their dry well won't deter the rush to offshore drilling.

A conservative decline rate of 6% for the world's oil fields means that more than half a million barrels per day of new production must be found each year.

Mexico falls right into this category. If the country doesn't do something soon, they'll become a net oil importer within the next ten years.

The infamous decline of the Cantarell field, which peaked at 2.1 million barrels per day in 2000, is a red flag for what lies ahead for fellow super-giant fields.

Now Mexico is turning to the major oil companies like ExxonMobil and Chevron to develop its offshore oil reserves.

And nothing is out of bounds this time around.

Pemex is about to begin its first foray into ultra-deepwater territory (wells drilled in waters deeper than 6,000 feet) to help offset the steep decline occurring at the Cantarell field.

Stocks Ripe for the Picking

During the last two years, we've told you about the growing opportunity in several offshore drillers.

Take a look at some of our past success with this sector: 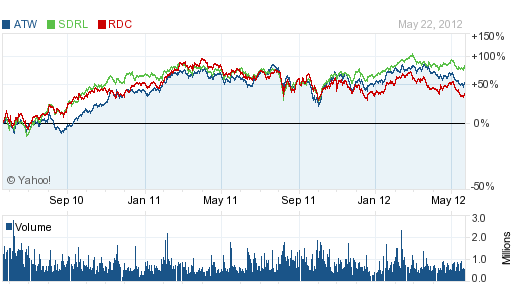 By 2015, Seadrill is expected to have another 18 offshore rigs in action, many of which are being specifically built to target ultra-deepwater fields.

In case you're keeping track, we haven't seen day rates this high since they peaked in 2007.

The timing of these new rigs is not a coincidence... and the potential here is easy enough for any investor to see.

We're seeing longer contracts, higher demand for rigs, and companies paying more than ever for these offshore rigs to drill.

Global demand will soon top 90 million barrels per day and relies on failing super-giant fields like Cantarell for one-fifth of total production.

There's a reason one of the best oil discoveries in recent times was off the coast of Brazil — and why Russia is planting flags on the Arctic seabed...

What do you plan to buy during a market slump?