Choose Wisely When Investing in These Unique Metals

How long are you willing to wait for those profits?

Thank goodness the biggest stocks in this market aren’t the only investments worth looking into.

Otherwise companies like FMC (NYSE: FMC) and Albemarle (NYSE: ALB) would have prices running off the charts by now!

They're two of the three biggest names in the lithium space, and there’s no end to the demand for what they’re supplying.

Likewise, you’d be hard-pressed to find a stock of either Glencore (LSE: GLEN)(OTC: GLCNF) or China Molybdenum (OTC: CMCLF) left on the market, as both are large producers of an arguably more important metal in the lithium revolution: cobalt.

Supply of this unique metal is even more precarious than that of lithium, and we’re looking at a shortage of both within just a few years. 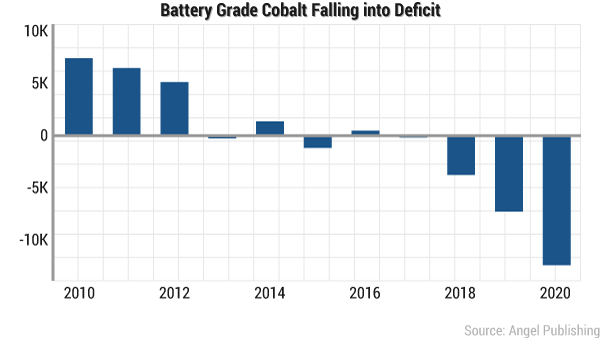 So if you’re not putting money into the big guys, what other options are there?

This Is the Deadline

Both metals are being thrust into the spotlight by one thing: batteries.

And in the battery world, there’s never been a growth catalyst quite like electric vehicles.

They’re slated to be a massive part of the global travel industry in just a few years, even bigger, perhaps, than the hybrid vehicle market (if I had a dollar for every Prius I saw on the road, I'd be able to retire tomorrow).

Bloomberg New Energy Finance estimates that EVs will account for 54% of new car sales by 2040.

Though Tesla is the most popular name in the EV game even today, it hasn’t been alone in this race for a long time.

BMW, General Motors, Ford, Volkswagen, Daimler, and more have promised to have their own lines of electric vehicles on the market by 2020 or soon after.

And that’s when the real drama will start.

You see, Tesla’s advantage thus far has been in having the best all-electric offering on the market.

In the beginning, it only made luxury cars. Its attempt at a more affordable EV with the Model 3 hasn’t tanked yet and could go on to prove the company’s worth.

But it will have to make its impact fast.

These other carmakers have the advantage of experience with high-volume production, and more deals with major battery makers are being signed every day.

With this kind of momentum going in the industry, where does that leave our biggest lithium and cobalt producers?

If you’ve dug any further than those major, surface-level lithium investments I listed above, you've probably come across a number of smaller companies operating in Argentina, Chile, and Bolivia.

These countries make up the Lithium Triangle, where a majority of the world's battery-grade lithium is produced.

Cobalt, however, does not have an open hub like this.

The world's largest cobalt producers, the DRC and China, are not necessarily the best places for new miners to get their projects started.

One area in Canada, named after the famous metal it has in abundance, is gaining more attention instead.

Last week, I explained a few reasons why Cobalt, Ontario, could be such a big deal for the cobalt industry:

Of course, if you’re looking for even bigger gains...

I talked about this a little last week, too, but I just can’t stress enough how big an advantage this tiny cobalt producer has right now.

It’s even closer to the Gigafactory, operating squarely in one of the U.S.’s few cobalt hubs.

Its most recent tests on that land have been nothing if not impressive, and the company plans to have operations fully underway in just a few years.

Just in time for the new wave of electric vehicles, in fact...

Yes, there is a deadline for this investment, and it’s coming up faster than anyone expected.

If you were part of the lithium revolution from the start, you’ve seen the kind of profit potential we’re looking at today!

If not, this is your second chance to get your piece of the lithium revolution.

I urge you to check out what this company has to offer today. There simply isn’t any time to lose.