China The Vampire Squid of Commodities

Editor's Note: Rare Earth Metals (REEs) are nothing short of crucial to the way we live. In fact without them, some of our most important modern technologies could never exist: rechargeable batteries, electric motors, photo optics, and solar cells, just to name a few.

For my final report on the 2009 ASPO peak oil conference, I must address the world's new prime mover of commodity demand: China.

With flat-to-declining economic growth rates in most of the rest of the world, the Red Dragon has emerged as the dominant force driving global demand for natural resources.

Adam Robinson, a Vice President at RBS Sempra Commodities who gave an excellent talk on the oil trade and its relationship with the recession, noted that China's willing to buy oil in size at $55 a barrel for its strategic stocks, providing a natural floor for global prices.

Steven Kopits, the managing director of Douglas-Westwood LLC, said China will overtake the U.S. as the world's top consumer of oil by 2018. In fact if supply is available, he thinks it could double U.S. consumption by 2025.

Tom Petrie, Vice Chairman of Bank of America Merrill Lynch, essentially agreed. In his model, all of the growth in oil demand through 2030 comes from non-OECD countries, with China accounting for fully 43%. The IEA anticipates that absolute oil consumption in the OECD will fall over next 20 years by about 3 mbpd, while China's increases by 9 mbpd.

Investors are looking at the convergence between falling OECD oil demand and rising demand in non-OECD, Robinson explained, and after taking monetary policy into account, the see commodities winning either way.

In his presentation on China's oil and gas balance, Michael Rodgers of PFC Energy made one thing abundantly clear: China's domestic oil production has nearly peaked, while its demand for oil is only going up.

China currently accounts for about half the total oil production of South Asia, Southeast Asia, and Australia combined: 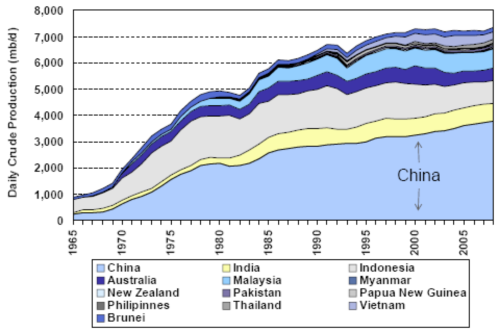 The crude oil reserve balance for Asia went negative in the early 1980s, when the region began producing more oil than it was discovering. Like the rest of the world, most of its current production is from large reserves discovered in the 1960s and 1970s, supplemented by smaller discoveries since. The region's current deficit is about 1.5-2 billion barrels per year. 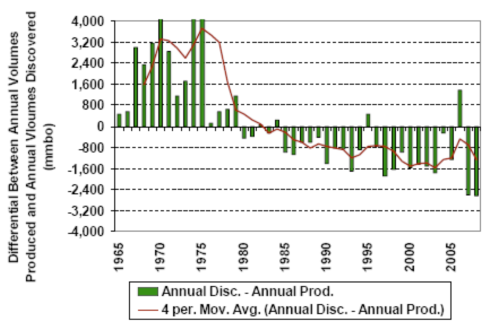 After years of continuous increase, China's oil production base is now in decline with overall depletion levels of 60%. Fields producing prior to 2000 are generally declining at rates of 5-7% per year, but mature fields are declining by as much as 16-20%. China expects enhanced oil recovery (EOR) technology to bring the overall decline rate to 6.7%.

New fields should allow it to maintain a production plateau around 3.6-4 mbpd for another 8-10 years in the PFC forecast. But then China will see a "catastrophic" drop in production as mature fields, accounting for 3 mbpd of production now, fall to about 1 mbpd by 2020.

Against a GDP growth rate of 8-8.5%, the stagnant supply picture means that China's demand for oil imports will grow from 4 mbpd today to over 10 mbpd by 2020. China now constitutes 7.5% of global GDP and 9% of global oil demand, which will soon grow into the teens.

An appetite like that, Rodgers said, means China must do exactly as it has been doing: aggressively compete with the rest of the world to secure reserves, and export workers.

The picture for natural gas is slightly better, but also points to sharply increasing imports. China's gas consumption is expected to rise from 7.6 billion cubic feet per day (Bcfd) in 2008 to over 30 Bcfd by 2030. Domestic production should keep up with demand until around 2014 — at which point imports will have to pick up the slack - and peak around 2020.

China is already building pipelines from every possible direction to import gas. I'm sure I'm not the only one who, looking at the following map, thinks "vampire squid." 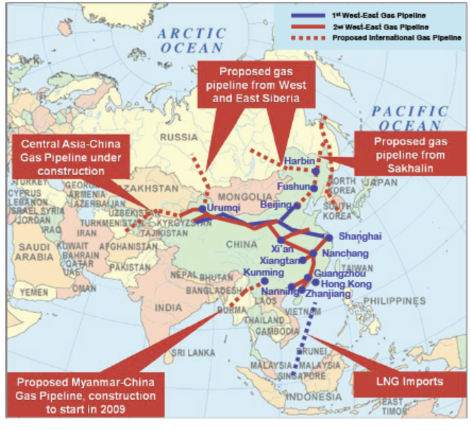 China's demand for coal is just as astonishing: In just the last four years, Kopits observed, its increase in demand for coal was equivalent to the total U.S. coal demand.

Vince Matthews, director of the Colorado Geological Survey, rounded out the picture with some stunning facts on the demand for minerals and other commodities. China is:

Consider this little factoid: China built 70,000 new supermarkets in 2005 alone. For a little perspective on that number, the 2002 census counted about 150,000 "food and beverage stores" in the United States.

That voracious demand drove up prices across the board. Matthews ran down a list of price increases from various months in 2003 to the present:

Although prices for many of the metals fell sharply in the commodity crash last year, they're now staging a comeback, driven by Chinese demand.

Worse, most of these metals are bought via long term contracts, not on the spot market. When those contracts expire, Matthews expects spot prices to spike again.

Even cement demand was disrupted when China when began importing it in 2003, resulting quickly in price spikes and shortages in the U.S. China now consumes half of all the cement in the world.

The resources causing the most consternation, though, are the rare earth elements. As I discussed a few weeks ago, China has a virtual corner on the world supply of these crucial elements, which are used in wind turbines, solar equipment, parts for hybrid cars, and many of the other solutions for a post-peak oil future.

The U.S. now imports between half and all of its supply of the rare earths, putting it at China's mercy for some of the raw materials that would be needed for a "Made in the U.S.A." renewable energy revolution.

Indeed, Matthews believes that China intends to take advantage of its position by clamping down on its exports of rare earths, to bring world manufacturing to them.

But perhaps this should not unduly alarm us.

If China is clear-headed and deep-pocketed enough to invest in the energy solutions of the future while we are not, and they can build them faster and more cheaply than us, then maybe it's time to stop worrying and learn to love our new Chinese overlords.

Rodgers has no doubt that China understands peak oil and expects future supply disruptions, which is why it's accumulating foreign assets and diversifying its import options.

Peter Dea, the president of oil and gas exploration and production company Cirque Resources LP, made the same point a bit more obliquely, rhetorically asking if China had no doubts about the future of oil, why would they have recently outbid Exxon Mobil for new drilling in Ghana?

Putting a finer point the difference between the strategies of the U.S. and China, Dea wryly observed that the U.S. has potential for offshore drilling for natural gas, but "it won't be developed until the U.S. takes energy resource planning as seriously as China does."

That doesn't appear to be in the offing any time soon. Washington doesn't seem to understand the commodity markets at all, Matthews said, nor the shrewd moves that China is making. While Japan already has a strategic mineral stockpile, and China is quickly amassing one, the U.S. is selling off its key minerals: "The lack of knowledge and concern over it in Washington is horrifying, and I can't explain it," he moaned.

Well, I have explained it: America has no energy plan, and we won't have one until we give up our fantasies about energy independence or drilling our way out, admit that oil is peaking, and get serious about planning accordingly.

While America was busy with its hallucinated wealth meltdown and trying to raise some cash by selling assets at garage sale prices, just one of China's three major oil companies, CNPC, secured 75 resource projects in 29 countries.

Another of the three, energy giant China National Offshore Oil Corporation (CNOOC), just bought oil assets in the US for the first time. The size of the deal for four deepwater exploration licenses in the Gulf of Mexico was undisclosed, but Norway's Statoil, the seller, characterized it as "small."

Still, the purchase is bound to make it more difficult for China to maintain a low profile as it snaps up resources.

Perhaps that's why it has begun trying to cover its tracks: China OGP, an oil industry newsletter issued by Xinhua news agency, recently announced that it would no longer publish data on China's stockpiles of crude oil, gasoline, and diesel. (As if that data weren't hard enough to get already! Killin' me.)