When I stepped off the plane in Calgary nearly a decade ago on my first junket to the Alberta oil sands, I had a good sense of what was in store for me.

I had found myself over 2,300 miles from Baltimore for the first leg of this trip, and I knew the drive ahead all too well.

Once we jumped on Route 63 and headed north, there were still nearly 500 more miles to cover before I could glimpse those oil sands operations again.

At the time, the U.S. was importing about 2.5 million barrels of oil from Canada every day.

By the end of the trip, one very poignant memory stood out more than anything else.

It wasn’t the trucks that were the size of small houses that left the biggest impression on me, nor was it the massive surface mining pits that are visible from space.

No, dear reader; it was one very small accommodation in my hotel room.

Scattered throughout the room were little placards situated next to every major object, from the television and phone to the bathroom and fire exit signs.

One thing about them stood out like a sore thumb: all of the signs were written in Chinese.

I can’t say it was the most unusual thing I’ve ever seen, but it was certainly one of the more intriguing.

And it summed up the future of the oil sands perfectly.

If nothing else, you have to credit China for always looking long term.

For years, China has been shoring up its energy security by pouring investments into foreign countries.

Since 2007, the Middle Kingdom has loaned out more than $60 billion to Venezuela and was perfectly happy to receive payments in oil.

Unfortunately, you know just as well as I do how badly that ended up for everyone. Sure, things started off great, with more Venezuelan oil flowing into China than ever before.

Check it out for yourself: 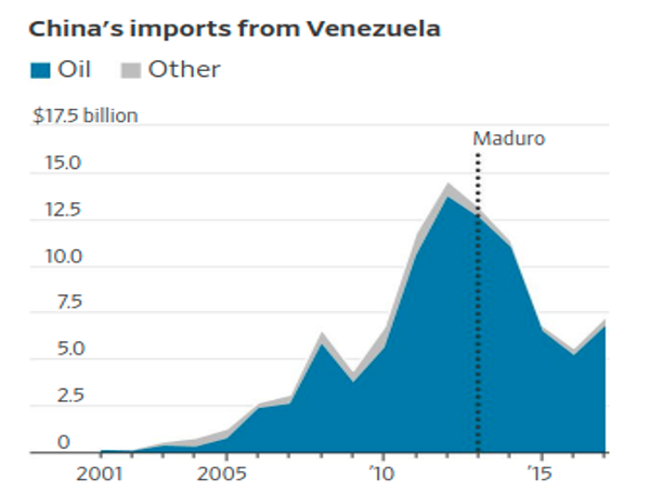 In fact, China, India, and Singapore account for 87% of PDVSA’s exports.

How much longer those exports will last is a crapshoot at this point.

It’s a good thing China has a Plan B... which leads us right back to those tiny placards in my hotel room.

For more than a decade, it’s become clear that China has had its eyes on the bituminous sands of Alberta.

We’re not talking about a few dollars here and there, mind you.

Through their state-controlled oil companies, the Chinese have pumped billions of investment dollars into oil sands development.

In 2009, PetroChina invested $2 billion for a 60% stake in the Mackay River oil sands project. Three years later, it spent another $680 million picking up the remaining 40% interest.

In 2010, Sinopec paid nearly $5 billion for ConocoPhillips’ 9% stake in the Syncrude project.

Many of my veteran readers will remember the $15.1 billion CNOOC shelled out to acquire Nexen Inc.

But it’s not just the Chinese government that has its eyes on Canadian crude.

Private Chinese investors have also doled out an extraordinary amount of cash for a stake in the oil sands. Perhaps the most recent example was the takeover attempt by Husky Energy, whose largest shareholder is Hong Kong’s richest man.

Although the deal was eventually scrapped, had it gone through, Husky Energy would’ve become the fifth-largest oil sands producer overnight.

Unlike Venezuela’s oil industry, which has been incredibly unstable since Chavez’s May Day Takeover in 2007, Canada offers China something it’s been craving all along: energy security.

As it stands now, the U.S. is far and away the largest buyer of Canadian oil.

Right now, they simply don’t have other options.

With the approval of the Trans Mountain Pipeline expansion project, however, Canada will diversify that clientele list by tripling its pipeline capacity to British Columbia, allowing oil sands companies to tap into Asian markets.

I told you last week that the best in-situ players will be the clear-cut winners in Canada’s push to sell China more oil.

Cenovus Energy (NYSE: CVE) is the largest and one of the most efficient SAGD producers in Alberta right now and has rewarded shareholders with a 42% move since last December.