It's been years since Obama said he would put coal companies out of business. Since then, Wall Street has ignored coal-producing stocks, making it the most undervalued sector in the market.

It’s true — coal production did go down during the Obama presidency. But since Trump was put in office, that has turned around.

Don’t get me wrong; the U.S. isn't burning more coal — it's exporting it, both to China to replace low-quality coal and to Germany, which shut down its nuclear power plants. 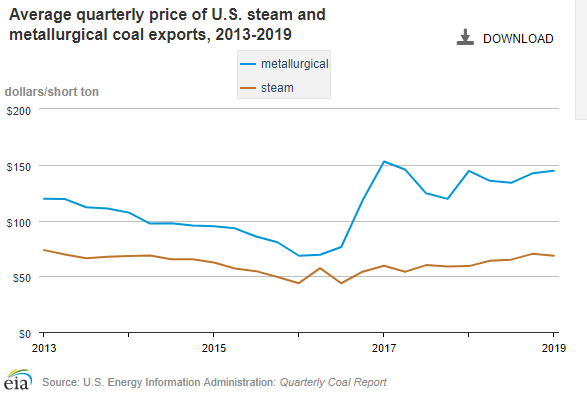 There will soon be more than 8 billion people on this planet, and they all want electricity. The lowest-cost producer of power is coal, and we have lots of it.

One professional organization estimates that there are 1,004 billion tonnes of coal reserves left, equivalent to 130 years of global coal output.

Coal is the major fuel used for generating electricity worldwide. As you can see, South Africa is most dependent on coal to keep the lights on, though even Germany with its pro-green agenda still needs coal.

Coal is cheap and plentiful. Coal plants are also low-cost and easy to build. Therefore, consumption growth is driven by the low cost of building and running coal-fired power plants and the strong demand from emerging market countries like China and India for electricity.

Their growing infrastructures and populations demand electricity. There are 1.3 billion people currently without electric power in the world, and they want refrigerators and TVs just like everyone else.

There is a true growth trend in coal right now. It is one of the most undervalued commodities in the world. But it won't be that way for long. There is a very solid case to be made that coal will be one of the best-performing assets over the next 10 years.

From a climate perspective, the ideal scenario would be for China to shut down all of its coal-fired power plants and switch over to clean energy like solar. But that can’t happen — China’s energy economy is like a massive ship that cannot turn on a dime.

China is going green, however, just not the way you think. China signed the Paris Agreement, which includes a promise to install 800 gigawatts to 1,000 gigawatts of new renewable capacity by 2030, an amount equivalent to the capacity of the entire U.S. electricity system.

To bridge the gap, China is rolling out new technologies to drastically reduce local air pollution and climate emissions from the nation’s remaining coal plants as well as building a host of new ones.

China is switching from brown coal to hard coal.

Not all coal-fired power is created equal. Emissions and efficiency vary dramatically based on the type of coal and coal-burning technology used. China has been steadily shutting down the nation’s older low-efficiency and high-emissions plants to replace them with new lower-emitting coal plants that are more efficient.

But they need the higher-quality coal. To get it, they import from the U.S. and Australia.

So while Wall Street thinks coal is dead, coal prices and exports have been trending upward. One U.S.-based coal company I’ve discovered grew earnings 79% last quarter and is paying a 12% dividend. And it has a price-to-earnings of 6.85! That's crazy undervalued.

Click here to find out how you can start making money today.

What If Green Energy Fails?
Is green energy really the future? Energy and Capital editor Luke Burgess examines an opinion piece that questions what would happen if it's not. At the very least, renewables are not the present... but that doesn't mean we should ignore them altogether.
Why Dirty Coal Is Making Investors Like You Filthy Rich
Usually, Christian DeHaemer and Keith Kohl disagree about coal, not today. Energy and Capital editor Keith Kohl explains why the death of the U.S. coal industry is turning a hefty profit for a small group of elite investors.
Hydrogen Fuel Cells: The Downfall of Tesla?
Lithium has been the front-runner in the battery technology market for years, but that is all coming to an end. Elon Musk is against them, but Jeff Bezos is investing heavily in them. Hydrogen Fuel Cells will turn the battery market upside down and we've discovered the tiny company that is going to make it happen.