China Is Now Open to Fintech

Last week, the U.S. and China signed a phase one trade deal that will be big for farmers and manufacturers. The trade pact calls for China to import $95 billion more of certain U.S. goods in 2021 as in 2017, or double the current amount.

But there is much more than that.

There is intellectual property protection and an end to forced technology transfers. There are agreements to allow more purchases of manufacturing, energy, and agricultural products, as well as opening the country to foreign financial services firms.

It is that last bit regarding financial services where investors like you can make the most money.

The financial industry has been trying to break into China for years. This clears the way to move forward. Revenues, earnings, and numbers of cardholders are set to surge.

For years, the Chinese government has protected its financial markets through byzantine regulations and other stall tactics, all the while controlling the largest banks.

That has now changed. The phase one trade agreement calls on China to give the American financial industry “fair and effective market access.”

U.S. companies can now offer banking services and insurance policies, as well as wealth management to the growing ranks of Chinese millionaires and billionaires.

This is a huge opportunity for Wall Street as well as fintech firms. I’m a huge bull on companies that are disrupting the current banking system and this will add momentum.

Fintech will be the sector to own over the next five years, and many financial stocks are undervalued.

At the China trade deal signing ceremony in Florida, Wall Street was well represented, with the head of JPMorgan’s wealth management division in attendance. Trump talked up JPM and its $36 billion in profits last year. In fact, according to Bloomberg, it was the best year of any bank in U.S. history.

I recently bought a lot of JPM in my retirement fund, not only for the China growth potential but also because it pays a 2.6% dividend and has a P/E ratio of just 12.89. Insiders are buying and the company is spending billions on fintech R&D.

The House of Morgan 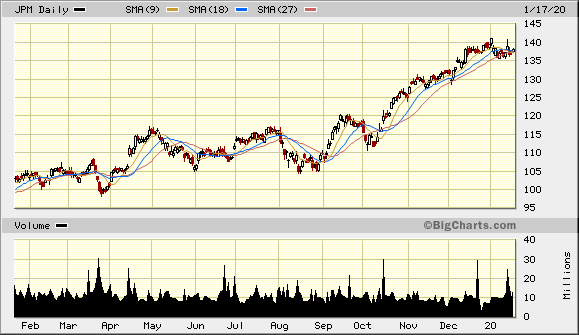 Going forward, even without China, there will be massive growth in personal banking and the technology that enables it.

The Federal Reserve recently put out a study on how we pay for things. Here are some of the key findings:

The numbers say that we are using cards more and cash less. We are also using debit transfers instead of checks, and remote purchases will soon eclipse in-store buys.

These trends are accelerating. This represents a significant opportunity to own certain fintech stocks. Find out more — read this free report now. Don't wait; better stocks than JPM are moving higher as I write this.