Cellular Agriculture: Investing in the Future of Food Production

If I were a religious man, I’d think this was a sign from God. 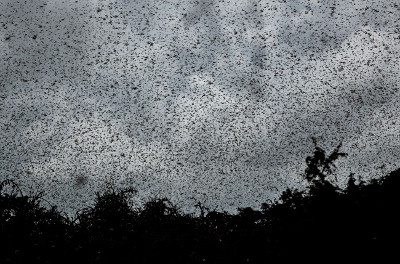 Swarms of locusts have descended upon East Africa, destroying crops and adding further pressure to a region already faced with massive food insecurity.

According to Oxfam, a large desert locust plague can contain up to 150 million individuals per square kilometer, with half a million locusts weighing approximately one tonne. One tonne of locusts eats as much food in one day as about 10 elephants, 25 camels, or 2,500 people. The insects can destroy at least 200 tonnes of vegetation per day.

The UN has recently ponied up $10 million to help eradicate the locusts with pesticides, and another $70 million is needed to complete the job.

Of course, even after these swarms are eliminated, new ones will return.

Last year’s irregular weather and climate conditions, which included heavy rains during the last three months of 2019, have contributed to the massive locust invasion. And while a hefty dose of poison will wipe them out today, future generations of locusts, perhaps in even larger numbers, are likely to return as these irregular weather and climate conditions become the norm.

But as I noted last week, with every crisis comes an opportunity.

Although this recent plague of locusts is destroying entire crops throughout East Africa, the reality is that this region was already dealing with a level of food insecurity that most in the West could never even imagine.

The locusts are just one more heavy burden being placed on a population already battling the strain of hunger and starvation.

Spraying most of East Africa with pesticides is really only going to serve as a temporary measure of relief to a region that clearly needs a more long-term solution, a solution that can ensure a steady flow of food that won’t be put at risk by the realities of a changing climate.

This solution is called…

Simply put, cellular agriculture is the production of agricultural products from cell cultures.

Foods produced from cell cultures are exactly the same produced from animals and plants. The only difference is how they’re made.

While the idea of growing food in a lab may seem strange or foreign, the reality is that this is what’s going to help feed a lot of hungry people in the future — particularly those living in regions that are most susceptible to the results of climate change.

And this isn’t science fiction or some lofty goal that’s 50 years from reality.

Labs have been making huge strides in not only growing food, but drastically cutting the costs to do so. It’s entirely possible that within five years, the cost to grow food in a lab will be cheaper than growing and producing it the “old-fashioned way.”

It should also be noted that there’s a lot of money to be made in lab-grown food.

A couple of weeks ago, we learned that Memphis Meats, one of the more well-known players in the lab-grown meat space, raised $161 million.

Some of the folks who ponied up for a piece of this action include: Bill Gates, Richard Branson, and Kimbal Musk, the brother of Tesla (NASDAQ: TSLA) CEO Elon Musk. Cargill and Tyson Foods also have a few million invested, too. 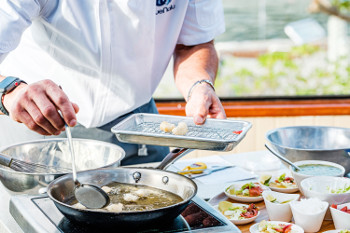 Following the demonstration, BlueNalu was able to show that its product performs the same way as a conventional fish fillet in all cooking applications. It can be cooked via direct heat, steamed, or even fried in oil. It can also be prepared in a raw state or acidified for ceviche or poke.

An interesting observation made by the company’s chef was that he didn’t have to worry about bones, fish scales, or having to throw away any unused fish parts.

To date, BlueNalu has raised $25 million.

This is all very real, it’s happening right now, and soon, lab-grown food will serve as a valuable solution to hunger and food insecurity.

As we gear up to adapt to a rapidly changing climate, lab-grown meat, and the companies that provide it, will prove to be incredibly valuable, and of course, excellent investment opportunities.