British voters have voted in favor of an exit from the European Union, which sent the pound plummeting and prices for safe-haven assets like gold soaring. The assumption is that a withdrawal from the EU could ultimately result in a recession for Britain that may even spread globally. 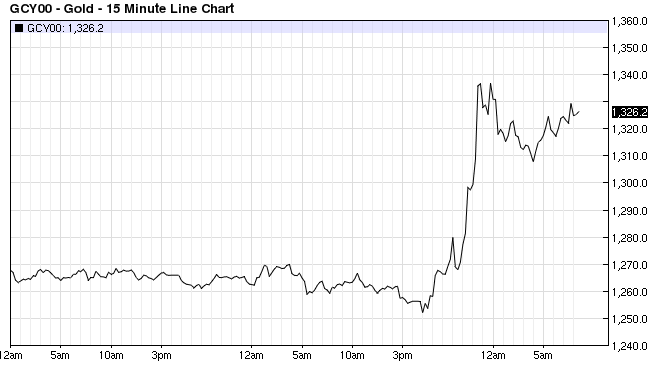 The price of silver also jumped to nearly $18 an ounce. Meanwhile, the U.S. dollar also saw significant gains against the British pound and other currencies:

These movements confirm that both gold and the U.S. dollar are still seen as safe-haven assets against other world currencies.

Gold is well known as a safe haven. But the greenback is less thought of as a safe-haven asset by Americans.

Nevertheless, the dollar is the world's main reserve currency, and all raw commodities tend to get traded and priced in U.S. dollars. So the dollar is used by many as a safe-haven asset against other currencies.

But, of course, this doesn't change the fact that gold remains the ultimate safe haven against all fiat currencies, including the U.S. dollar.

The volatility following the Brexit vote also reflects how an emotionally driven market can send prices for safe-haven assets wild. A 7% surge in gold prices in such a short period of time is a near historic move.

Those of you who remember the last day of the great gold bull market of the 1970s know the price of gold shot up 11% in under 24 hours.

The big move in gold prices has gotten people very excited. But the reality of the Brexit referendum is this...

For now, Britain is still part of the EU, even after the vote.

The process of actually leaving the EU will take years. And it could still be blocked, overturned, or even revisited later with another public vote.

Absolutely anything is still possible. So the Brexit referendum does nothing other than fan the flames of fear. And that's a sell signal to me.

If you didn't take any significant gains from the gold stocks I've recommended to you here in Energy and Capital the other day when gold was over $1,300 an ounce, do it now.

As I mentioned to you on Tuesday, I believe this is a knee-jerk reaction in the market, and the price of gold will actually settle down next week due to a lack of any major market-driving events.

And THAT will be a buying opportunity.

What's more, positive unemployment figures released here in the U.S. this week and the recent surge in the dollar will be contributing factors during the Federal Reserve's next FOMC meeting in July.

At the very least, these factors will be touted by Fed officials as signals of strength in the U.S. economy. This will have some considering the possibility of the next rate hike during that July meeting and may contribute to lower gold prices.

More importantly, my “new gold trade” that I wrote to you about on Tuesday stands.

So here's the action I recommend investors take...

Take any significant short-term profits from gold or gold stocks right now. Then reenter next week at a lower price.

I'm off right now to my local bullion dealer to unload my short-term physical bullion holdings.