Breaking into the Lithium Revolution

Things are heating up in the lithium space.

But let’s be honest here: the entire sector has been hot for the last few years, so it’s wrong to say that things are just starting to pick up now — because the lithium revolution is already well underway.

What you and I are getting now is a glimpse into the future.

And using what we do know now can be the difference between a round of massive profits and walking away with your pockets empty.

And if you think the lithium market looks good now, you ain't seen nothin' yet...

Looking to the Future

It may be hard to believe, but the biggest markets for lithium products are actually places that are still working to adopt the technologies that rely on them!

Take, for instance, those mobile devices many of us take for granted: smartphones.

India, with the second-largest population in the world, is still in the process of adopting smartphone technology.

There, it's as much due to high cost as it is the inability to get a connection. 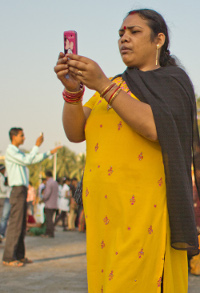 The inevitable spread of tech paired with a massive consumer base with minimal wealth will make it difficult for high-end phones to get a foothold. In the second quarter of 2016, Samsung held the largest (25%) single-company market share in India.

Now, you may not imagine that smartphones would be that much of a catalyst for lithium. After all, just think of how tiny their batteries are... but it’s more than enough when we’re talking about a market of 1.3 billion people.

What’s more, the country is planning to expand its solar energy capacity, which you and I both know will require some investment into energy storage.

Of course, if smartphones in India are going to be a major part of the lithium boom, you can bet that the surge in demand will mint a new breed of millionaires.

It's not hard to guess where I’m going next with this: the EV market in China.

Of course, after applying for the lottery and beating the 1:725 odds to win, Chinese drivers still can't drive whenever they want; they can only drive on certain days of the week, and only within the city in which they got the license plate.

With a population nearing 1.4 billion and a good portion of its citizens driving gasoline-powered cars, China's cities are absolutely choked with smog.

And it’s regulations like this that keep the air from killing more people than it already does.

But guess what doesn't qualify for this game of chance?

That's right: clean-engine, lithium-powered electric vehicles that can be bought and driven on whatever massively crowded road the owner wants to brave.

In both India and China, where these mobile technologies could be considered the key to individual freedom, lithium batteries are more than just a hunk of metal.

Lithium Demand by the Numbers

China is the largest lithium market in the world by far.

The sheer number of people makes it obvious that the world’s lithium demand will be consumed in China, and that’s only counting the phones and cars they will be importing!

Now, Tianqi Lithium Industries has been slowly breaking into the lithium supply oligopoly over the last few years, replacing the spot once held by Rockwood.

But I’m talking about more than mining, too. The company is now planning to build a $306 million plant in Australia specifically for EV-grade lithium supplies.

Point is, they know where the lithium market is headed — and so do we!

A number of studies have come out recently in favor of major growth in the market.

Between now and 2021, demand for lithium batteries in India is expected to grow by 32% CAGR.

The oligopoly in this market isn’t expected to break for quite a while: Panasonic, LG Chem, and Samsung SDI will still dominate for the foreseeable future. The three hold 57% of the global market.

And it’s no wonder: all three have deals with EV makers, besides being giants in the world of smaller consumer electronics.

Resource Maven’s Gwen Preston makes the case: “Even if you take cars out of the picture, the growing demand for lithium from industrial applications and personal devices will increase by 40% in the next half decade... When you add cars back in, using only conservative estimates for adoption, the demand for lithium will triple in the next decade.”

Here’s What We DO Know

Look, there will be a point in time when the media pundits start asking whether it’s time to ditch the sector as a whole.

Unfortunately, their question not only dismisses these lithium players as having hit their peak but also assumes that lithium prices won’t move higher from here.

But the problem isn’t prices — it’s actually on the supply side of the equation.

Keep in mind that only a handful of the exploration companies today will be around to bring their projects into production.

All it takes is a little due diligence to figure out which ones they will be, and in the coming weeks, I plan on showing you a few hidden gems left in the lithium sector that are still flying under Wall Street’s radar.