Bitcoin Gets the Market Back to Basics

The recent surge in Bitcoin prices has sparked debate over how it should be classified. Is Bitcoin real money? A speculative investment? A new payment system? Or something else?

Getting mixed up in the back-and-forth are also traditional monetary assets like cash and gold. And the ongoing conversation seems to have produced a marked increase in the number of tweets, editorial, and comment chatter that generally seeks to answer a very important, fundamental question...

Chances are, you've probably never really thought about it that hard. Money is money. You just want more, right?

But the concept of money is vital to a globalized market economy. And that probably comes to you as no big surprise: money is important. But its importance is often taken for granted.

Traditional trading and barter economies that don't use some form of money are simply unsuited for international trade. Without money, our modern society simply wouldn't exist. So it's important to pay attention when people begin to question its underlying logic.

As a longtime gold researcher and investor, I find exploring the fundamental nature of money to be familiar territory. I often argue why gold is a legitimate form of money. In doing so, I often have to explore fundamental monetary concepts.

But in all that time, I've never found any real consensus from economists on the definition of money. And that's quite odd. You'd think we'd be able to easily define something that everyone always wants more of.

Well, money is much more difficult to define simply because it represents abstract concepts... even though it's mostly a physical object. And it's money's abstraction that has led to many overwrought and confusing academic definitions.

John Hearn, Senior Economics Lecturer at the London Institute of Banking & Finance, jokingly says he tells his students that a recital of Francis Walker's definition of money is sure to impress at parties:

Money is that which passes freely from hand to hand throughout the community, in final discharge of debts and full payment for commodities, being accepted equally without reference to the character or credit of the person who offers it, and without the intention of the person who receives it to consume it, or enjoy it, or apply it to any other use than, in turn, to tender it to others in discharge of debts or payments for commodities.
— Francis Walker, Money in Its Relations to Trade and Industry (1879)

Did you get that?

OK, that's an exhausted definition by some stuffy old economist who wasn't necessarily trying to write to the masses. How does Merriam-Webster or Oxford define?

A generalization about a medium of exchange and usually something about coins and banknotes: 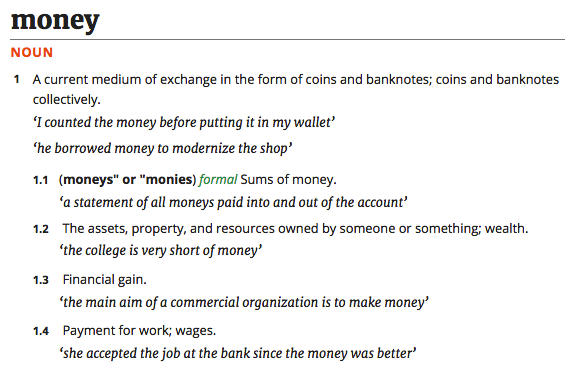 The economist's definitions of money can be overwrought, and layman descriptions are too broad.

So, with all due respect to those who've already contributed, please let me attempt to define money in my own terms...

Money is an acceptable medium for the storage and exchange of energy in the form of labor.

(I don't want to confuse you, but I think it's important to differentiate between money and currency here. All money is not necessarily used as currency. But all currencies used are money. A currency is simply a country's legal tender.)

You already know how this works: Do your job, get paid, then use your wages to pay others as compensation for already doing their job (buying goods) or for a future or current task (performing services).

Money, in all its forms, is essentially a battery for human labor. And when you boil it down, human labor is equivalent to energy. So both money and batteries literally store forms of energy. (In fact, energy's relation to money is a major part of why Energy and Capital even exists as a newsletter.)

But money must also be acceptable. And this is why gold was used as money prior to the invention of fiat currency...

Gold is the ideal element to be acceptable as money. In its purest form, the gold element is solid, non-toxic, rare but not too rare, and very easy for humans to identify. And to top it off, gold does not corrode under natural forces, unlike every other metal.

Despite all this, however, we no longer use gold as money. How we got here is another story. But my point is money must be acceptable. And that's really the big argument against classifying Bitcoin and other digital currencies as money: Bitcoin is only accepted by a very small percentage of the global economy... and it's not attached to any formally recognized government.

I argue that Bitcoin is a legitimate form of money because it's also energy-based. But for the time being, Bitcoin is being treated as a speculative investment, not as a form of money. Gary Schneider, Professor of Accounting at California State University, says only about 10% of Bitcoin is held by people who use it in commerce. The rest are speculators hoping to sell at higher prices.

Whether or not Bitcoin will ever become perceived by the masses as a legitimate form of money is yet to be seen. But the debate itself has brought the market back to asking very fundamental questions. And if enough people change their positions on something like the concept of money, we should expect nothing less than a paradigm shift in markets around the world.

At the very least, the market's reevaluation of the core concepts of money is something to keep an eye on.

Cobalt Is King in the Lithium Revolution
Energy and Capital editor Keith Kohl explains why cobalt is shaping up to be one of the hottest investments of the next decade and why companies like Tesla are doomed if they can't secure the right supply.
Bitcoin, Ethereum is Not Safe
Your cryptocurrencies may not be as safe as you think.
My Criteria for Explosive Small-cap Growth Stocks
Since most junior resource stocks are pre-revenue, much research and analysis needs to be done on management and the location/jurisdiction where they’re operating. In small-cap tech stocks, management is important, too. But now you also have to look at revenue and margins.
Why Ethereum Investors Should Look at Ripple
Ethereum is paving the way for other digital currencies, and Ripple may be the first to benefit. Ripple's potential doesn't end in finance. Once the channel is constructed, Ripple can ferry any kind of information between two individuals...
Hydrogen Fuel Cells: The Downfall of Tesla?
Lithium has been the front-runner in the battery technology market for years, but that is all coming to an end. Elon Musk is against them, but Jeff Bezos is investing heavily in them. Hydrogen Fuel Cells will turn the battery market upside down and we've discovered the tiny company that is going to make it happen.