Tomorrow is the Fourth of July, which is a time to celebrate all things American. For me, the best Fourth will always be when I was eight years old in 1976. My parents took me to the Boston Common to watch fireworks and see Arthur Fiedler and the Boston Pops perform the old standards. Real cannons boomed for the "1812 Overture" as fireworks climaxed.

Fire hydrants were painted to look like minutemen, and it was the first time I saw drunks passed out at random. I can smell the gunpowder, spilled Narragansetts, and Bomb Pops to this very day.

Though I was too young to know it at the time, the 200-year anniversary of America was also its peak in many ways. Nixon took the dollar off the gold standard a few years before. Vietnam was lost, the Summer of Love turned into the horror of Charles Mason, inflation was ramping up, and U.S. oil production began its long decline.

Americans have always had a love of the open road, and oil mixed with horsepower provided the dreams to follow it. The epitome of 1976 was the Cadillac Eldorado's Bicentennial Edition. It came pinstriped in red and blue. 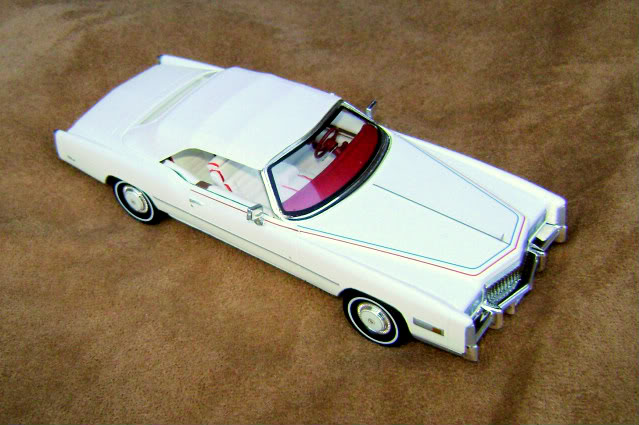 The Eldorado had a monster 8.2-liter engine that would put out 400 horsepower in 1970. However, the oil embargo coupled with new environmental rules meant that by 1976, it had dropped to a pathetic, get-out-and-push-uphill 190 horsepower. And it still got just 9.5 miles to the gallon.

To add insult to injury, pending governmental rollover rules also meant that it would be the last American ragtop. Ironically, speculators rushed to buy the iconic beast and pushed its price up to $12,000 MSRP.

But a funny thing happened on the way to the scrap lot. Those rollover rules never did get implemented, and Lee Iacocca reintroduced the convertible for Chrysler in 1982. A few decades after that, a handful of businessmen took risks and produced another great American story: the fracking revolution.

In the 1980s and ’90s, Mitchell Energy had holdings in the Barnett shale region of Texas. The company's data said it was sitting on a mother lode of natural gas but couldn’t make it profitable. It was trapped between layers and impossible to develop using the extraction technology of the time. Furthermore, production rates were declining, and the company had just lost its best buyer: Chicago.

The company didn’t have enough money to buy more holdings, so it kept putting what money it had into drilling in old fields. It couldn’t afford the high-tech chemical proppants the consultants were selling, so it used water mixed with sand. It also bored horizontal wells, an idea others had pioneered. Slowly but surely, it started to work, and production numbers went up.

Gregory Zuckerman wrote a great book about it called The Frackers.

It's a prototypical American tale of risk and reward by oddball wildcatters who went from near bankruptcy to billionaires.

A group of low-level players, operating in fields the big companies long ago abandoned, bucked all expert opinion to create billions in value out of virtually nothing. The men took on enormous debt and were laughed at but somehow managed to figure out the shale gas process.

They would drill a well, shut it down before they had to report the numbers, and go buy more shale land on the cheap. In many cases they were buying up access to land before they even had the technology to profitably drill it.

When George Mitchell, the president of Mitchell Energy, a Texas natural gas company, wanted to lease more acreage in the Texas shale in 1998, even his own board scoffed at him.

The breakthroughs that finally turned the corner to profitability were a product of time, hard work, and dumb luck. A Mitchell engineer named Nicholas Steinsberger discovered the right mix of fluids to shoot down into fracked wells largely by accident.

As is often the case with innovation, Steinsberger pushed his new process despite lack of funding and ridicule from senior engineers in the company.

In 1999, George Mitchell’s company was under tremendous financial strain and running out of natural gas reserves. By 2001, production was up 250%, and he sold Mitchell Energy to Devon Energy for $3.1 billion. This made George a billionaire two times over.

Mitchell Energy and others that followed changed the world and returned the United States to a major hydrocarbon producer and energy exporter. That story is written. It is priced into today's $46.42 per barrel oil price. The question is what will happen next...

There are three factors that will at some point change the oil market dynamics.

Already oil wildcatters are hurting. The contrarian in me loves this chart.

We are hearing tales about squeezed funding and lack of financing from the banks. The fact that share prices are low also means they can’t fund new wells from equity offerings. They have to do it out of cash flow, and it simply isn’t there.

At the same time, there is a million barrel-a-day increase in production for 2018 baked into the oil price. We are not going to get it.

Oil prices hit a turning point this week as rig counts stopped going up and instead dropped by two. That’s the first drop since January.

Oil is a buy low/sell high business, and I am bullish on oil prices and select oil explorers and producers. I especially like Mexico oil shale prospects.

Mexico is where the U.S. was 15 years ago. It has numerous mature fields with similar geography to West Texas and lacks the knowledge for shale production.

The new president recently opened Mexico's oil market to foreign companies. I’ve found two excellent wildcatters that were formed just to take advantage of this new Mexican opportunity. The upside is huge, and the timing couldn't be better. If this was 2014, it is unlikely you would be able to get shares below $5. Now they are below $1.

I’ll send out my report later on in the week.

Investing for Grumpy Old Men
Kids these days... They're terrible, right? The worst generation ever? Or could that kind of thinking be a bias that's holding you back from investment success?
The Mother of Blow-Off Tops
Energy and Capital editor Christian DeHaemer tells you why now is the right time to buy stupid stocks and how to do it effectively as we approach the blow-off top.
Mexico Can Finally Afford Trump's Wall
Energy and Capital editor Keith Kohl shows readers why Mexico's oil industry may be in for the boom of a lifetime...
Hydrogen Fuel Cells: The Downfall of Tesla?
Lithium has been the front-runner in the battery technology market for years, but that is all coming to an end. Elon Musk is against them, but Jeff Bezos is investing heavily in them. Hydrogen Fuel Cells will turn the battery market upside down and we've discovered the tiny company that is going to make it happen.