Beware of This Gold Scam

A hundred years ago, it was bigger than sliced bread...

A revolutionary metal that the entire world was scrambling to secure...

The lithium of its day...

With WWI looming, tungsten was a strategic metal that could have changed the face of history. 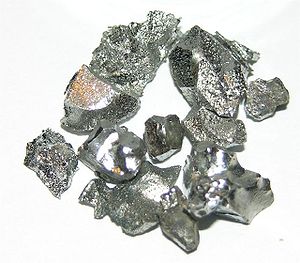 Tungsten was actually discovered over 200 years earlier. In the 1780s, German and Swedish chemists were the first to isolate tungsten. Its name is derived from the Swedish words "tung" and "sten," meaning "heavy stone."

Tungsten is almost as hard as diamond. And it has one of the highest melting points of any metal. By the turn of the 20th century, scientists discovered that by adding only a small amount of tungsten to steel, it became much stronger and far more resistant to heat and stress. This made tungsten a key material for war.

Tungsten's hardness and high density made the metal great for armor and armor-piercing bullets. And the nations that controlled the metal during the world wars had a huge advantage over their enemies.

Today, tungsten is still most widely used for armor-piercing bullets. Tungsten's properties also make it a great material for creating ultra-strong cutting tools such as knives, drills, and circular saws. These tools are used in milling, mining, metalworking, and the construction industries.

Over the years, scientists have used tungsten for dozens of other applications, including heating elements, light bulb and vacuum tube filaments, rocket engine nozzles, x-rays, lubricants, nanowires... there are too many to list.

It's even used to scam people out of money.

Tungsten is almost exactly as dense as gold. And that makes it a choice material for creating fake gold coins and bars.

Scammers will sometimes take a gold bar, drill out the center, replace the missing gold with tungsten, and cover up the holes. 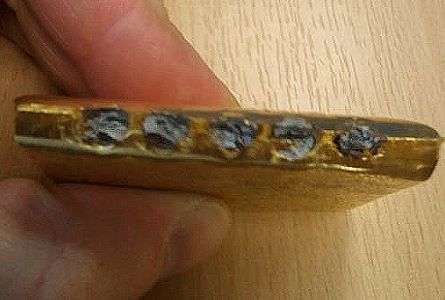 To the average retail buyer, there's almost no way of knowing the difference between an unadulterated gold bar and one that's been filled with tungsten. The only way to really know is to drill into your gold bar or use a mass spectrometer.

Fortunately, this is rare. Most of the gold bullion on the market is legit. And scammers are always going to try to create the biggest fake gold bullion. They're more likely to try to fake a kilo gold bar than a single ounce. And most retail buyers aren't buying kilos of gold.

Buyers of large bars mostly include jewelry manufactures and governments. Jewelry makers will quickly find out if they've purchased tungsten-filled gold. Since they melt down gold bars to create their products, they have no problem drilling into their gold bars immediately. And every once in a while, you'll see a story in the news about some poor jeweler who got ripped off. Governments, on the other hand, just store their bullion in a vault.

Are any of the gold bars in Fort Knox tungsten-filled?

Are any gold bars held by other governments tungsten-filled?

There's no telling. But, as you can imagine, this is a serious concern.

Governments around the world currently hold over 1 billion ounces of gold as reserves — about 20% of all the aboveground gold on Earth. If only 1% of that gold is fake, the world is missing 10 million ounces of gold, worth over $13 billion today. That's more than the annual GDP of many African countries.

But, as I mentioned, using tungsten to create fake gold bars is uncommon. And scammers are most often caught. On rare occasions, however, a retail buyer will end up with a tungsten-filled bar. There are several videos on YouTube showing retail investors drilling into their gold bars only to find they're tungsten-filled.

A good way to avoid fake gold bullion is to always avoid buying from overseas dealers, as legal jurisdictions can often interfere with justice.

Ultimately, the best way for you to avoid buying fake gold bars is to always buy from a reputable bullion dealer. The U.S. Mint has a list of its authorized bullion dealers on its website. This is a great place to start looking for a reputable dealer.

It's rare. But it happens. Make sure you buy gold from one of the good guys.