Infrastructure Investing at Its Best

Energy is — and always will be — a profitable long-term play.

You should know that by now.

If you don't believe it, you're better off burning your cash for warmth.

Last week, I shed some light on the Mexican oil crisis. At first glance, I'll admit my sour view of Mexico's oil production is more doom and gloom, but I'm hard pressed to find a reason why they won't self-destruct from Pemex's production collapsing.

But does that grim outlook mean we're should throw in the towel?

Several weeks ago, I asked a quick, simple question: Right now, which energy plays are you most comfortable holding for the long run?

The answers that flooded my e-mail inbox shocked me.

The vast majority of responses were one of the supermajor oil companies: ExxonMobil, ConocoPhillips, Royal Dutch Shell, Chevron, and BP.

I had to learn why.

Trouble for the supermajors

At first, I had to grudgingly admit the supermajors have given shareholders a nice return — assuming you were lucky enough to invest in them twenty-five years ago... 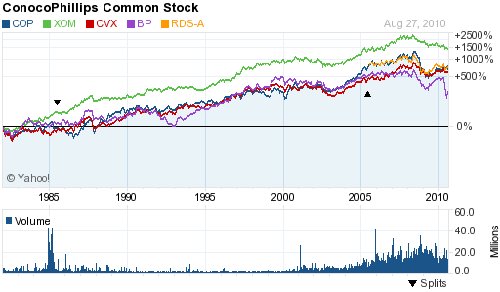 No matter how skeptical I am of the supermajors, they've certainly paid off over the long run — even if it took holding your position for two decades.

But their luck has run out.

There's one reason why I'm not too thrilled about their future returns: national oil companies.

You've heard of them before... China's CNOOC, Saudi Arabia's Saudi Aramco, Russia's Gazprom, and Venezuela's PDVSA are just a few on that list.

And let's not fool ourselves; these are the true oil giants. In total, national oil companies control approximately 90% of the world's proven oil reserves and more than half of the world's oil production. That share will continue growing over time.

Two years ago, oil prices reached an all-time high of $144 per barrel. If anything, countries are suddenly realizing how valuable their natural resources have become — and they're not going to give them up without a fight.

When Iraq first opened bidding to develop several major oil and gas fields, companies were rejected because their bids were too low. Yet the complications which arose during Iraq's bidding process were trivial compared how other countries handled the supermajors.

In Chavez's May Day takeover in 2007, he officially took control of the last privately run oil fields. Compensation for the former owners was far lower than market value.

Now, it's doubtful that Venezuela's state-run company will have neither the money nor expertise to develop the massive Orinoco Belt oil projects.

Within the last few years, it's almost become cliché for countries to give the finger to ExxonMobil and crowd. And the increased sensitivity over national resources is a signal that things will get much tighter for the supermajors.

The effect was clear...

Over the last year, only two of the six supermajors have managed a small gain for shareholders. 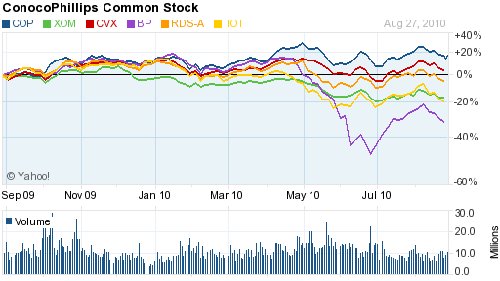 As I said before, there are much better long-term opportunities than these dying supermajors.

One of the problems with energy traders today is that they always fail to look ahead. Maybe they don't have the same bullish outlook on energy that we do.

Not that those opportunities aren't there, mind you.

Sometimes the stars align, and all the hard work you've put into your research pays off handsomely. My readers are always quick to point toward the 727% gain they banked on one such occasion.

However, there is another side to the equation — one that investors often forget even exists. It's not just about production. Remember that. If the trillion barrels of untapped oil locked in the Green River formation has taught investors anything, it's that oil is worthless unless you can bring it to market.

That is also becoming a harsh reality for many Bakken producers, who have been forced to ship their crude by rail and sell their oil at a discount. And yet it's not just U.S. producers that are looking for relief.

Remember how the United States has been shifting the bulk of its oil imports to Canada?

Our Saudi oil imports have decline 35% within the last seven years. Meanwhile, Canadian crude imports have surged 61% during the last decade.

I'd suggest taking a closer look pipeline stocks. Many of them are expanding current projects to meet future demand.

And the fact that these pipeline plays have managed to outperform the supermajors over the past year is not a coincidence... 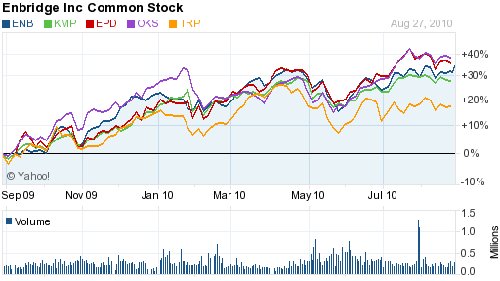 It's only going to get better here on out for them, too.

P.S. At the heart of these pipeline profits is the latest oil boom to hit North America. The best part is that my readers and I have been closing gain after gain from the beginning. And right now, we're on the verge of making our next round of profits. Feel free to check out our latest oil report, highlighting one company that has an ace up its sleeve. Click here to learn more about this opportunity.