It was a perfect summer day — 80 degrees, mostly sunny, and a light breeze blowing across the water.

It should have been a cacophony of background noise and a sea of faces. But this was the scene here in downtown Baltimore yesterday at around noon... 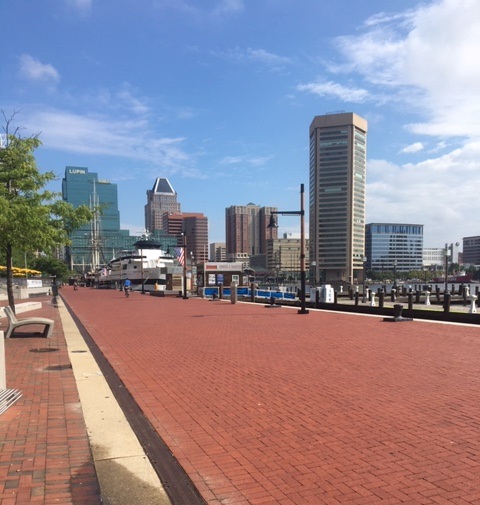 And quiet. It's so quiet downtown that right in the middle of the day, I can often hear my own footfalls echoing off the buildings. Sometimes I swear it feels like being in some type of I Am Legend situation... I Am Luke.

Of course, Baltimore is not alone. This is the situation in many other cities around the nation, sending lawmakers scrambling for a solution.

Unfortunately for the U.S. dollar (but fortunately for gold), that solution involves pandering to political constituents to spend money the government doesn't have.

Back in March, the CARES (Coronavirus Aid, Relief, and Economic Security) Act provided $2.2 trillion in economic stimulus with subsequent legislation adding hundreds of billions more. The government funded this by creating and selling debt to the Federal Reserve (aka debt monetization). As a result, the Fed added nearly 15% to the total supply of U.S. dollars with one piece of legislation.

Now, the Democrats and Republicans are fighting over a new stimulus package that will add at least another trillion in new U.S. dollars... much more if the Democrats get their way.

Republicans are fighting for a new bill that would cost $1 trillion and include liability protection to shield businesses and other organizations from being sued over coronavirus-related issues.

Meanwhile, Democrats are aiming for a $3 trillion package that will have eviction protections for rental tenants.

There are other key differences between the Republican HEALS and Democratic Heroes acts. But it's clear politicians on both sides are using these stimulus packages to pander to their constituents... as expected.

Either way, the government doesn't have $1 trillion, let alone $3 trillion, sitting around somewhere. And there's no way it could raise that kind of money in taxes fast enough. So it's going to have to go knocking on the Fed's door again.

That only means even more U.S. dollars being created. At the high end (if the Democrats get their bill), that's another $3 trillion.

It's important to note that prior to the coronavirus pandemic, there was about $15.5 trillion in U.S. dollar supply as measured by M2. Because consider this for a moment...

Let's say the CARES Act back in March added $2.5 trillion to M2.

And let's say the Democrats get the package they want, adding another $3 trillion to M2.

And let's assume that's it... No more spending after that.

In that scenario, $5.5 trillion in new U.S. greenbacks will have been created, adding 35% to the total money supply since the beginning of the pandemic.

Let me say that again...

When it's all said and done, there's a good chance the government will have added 35% to the total supply of U.S. dollars to pay for coronavirus stimulus.

And there's little chance such an addition to money supply doesn't devalue the greenback. Here's what's happened to M2 so far... 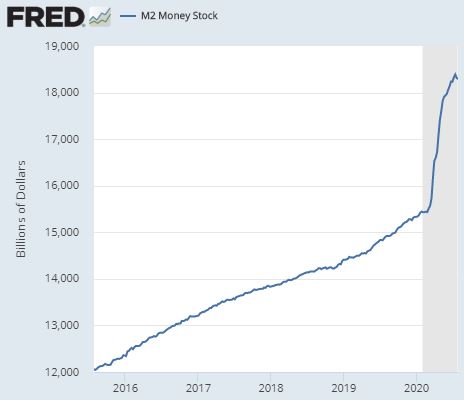 And that's just so far!

The addition of all this new supply is already taking a toll on the dollar. Since the beginning of the pandemic, the value of the U.S. dollar has dropped by about 7% as measured by the USD Index. But with continued additions to money supply, there's little doubt the dollar is still going south.

As I mentioned, that's bad for the old greenback. But good for gold.

The reason you're seeing gold prices break records is... well, everything I just said. The government needed to spend money it didn't have so it just created more, devaluing the dollar and heightening the appeal for gold.

Going forward, we should expect much of the same: a falling dollar and rising gold prices.

Republicans and Democrats are at each other's throats right now over the details of the new stimulus bill, mostly over how money is spent. But there's one guy who truly doesn't care either way...

Bet on politicians spending money they don't have.