The Fine Line Between Price and Liquidity

As I mentioned to you on Thursday, Brexit changed everything for gold and precious metals, and the markets continued to respond on Friday:

But the run in precious metals prices doesn't appear to be through just yet. There are many betting on $1,400 or $1,500 gold by the end of the year. Some are wagering the yellow metal will go even higher. But with a shaky global economy and little to nothing central banks can do to help at this point, it's clear that the general direction of precious metals over the next several month is one way: up!

With that in mind, I thought I would take some time this holiday weekend to give you some tips on buying the physical metals.

The very first thing a new precious metal buyer is going to notice are bullion prices — specifically, that all precious metal coins and bars retail higher than market prices.

For example, spot gold prices as quoted by the CME Group closed at $1,345 an ounce on Friday. But if you walked into a coin shop and asked for a one-ounce gold coin, the seller might ask for more than $1,400.

This additional cost over market spot prices is referred to as a premium — and it's generally the end result of a series of price mark-ups to cover costs and realize profits that runs through the distribution chain from mint to retail dealer.

Different bullion dealers charge different premiums. So right off the bat, it's a good idea to shop around.

There are a few websites to compare bullion prices from online dealers. None of them are really great for price comparison. But they are a good place to start. Here are two:

After noticing that precious metal coins and bars retail higher than market prices, new buyers will next instantly see that even when buying from a single bullion dealer, a premium most often depends on two things:

Here's APMEX's pricing for a 2016 one-ounce American Gold Eagle as an example:

So the best way to keep costs down when buying precious metals is to make larger purchases with cash, electronic check, or bank wire.

The most significant difference in premiums, however, ranges among the different types of bullion coins and bars. And owning the wrong kind of precious metal bullion can end up costing you a lot of money.

There is a countless array of precious metal bullion products on the market today. Most of it is extremely overpriced. Some of it has little to no resale market. And a lot of it is downright junk.

For those looking to seriously invest in physical precious metals, there are only two great options:

These bullion coins are not the most affordable in terms of having the absolute lowest premiums. However, they have something even more important: good liquidity.

The most important part of any investment is the part where you sell. That's where you make money — hopefully. And if you can't sell your physical bullion, you end up with a fancy pet rock.

The U.S. American Eagle and Canadian Maple Leaf series are the most liquid and the absolute best choices for investors. But there are several differences between the two bullion coins that are best explained by looking at them in terms of their precious metal content. Let's start with gold.

As the most widely known and traded bullion coin in the world, the American Gold Eagle series is the standard for bullion coin investment. There is simply nothing better.

The main drawback that new bullion buyers often see in the American Gold Eagle is the premium for the coin. The premiums for AGEs are higher than for most other government-issued gold bullion. However, sellers will often receive a premium when they sell Gold Eagles. So you're likely to get that premium back upon divestment.

The standard size for American Gold Eagles is one troy ounce (31.1 grams). But the coin is also available in various “fractional” weights to suit the needs of individual investors. They include 1/10-ounce, 1/4-ounce, and 1/2-ounce weights.

For those looking to invest today, the most affordable American Gold Eagles are the one-ounce coins. From online bullion dealers, the premiums for brand new (2016) one-ounce Gold Eagles currently range from a little more than $50 to $125 over spot prices.

Personally, I also like the 1/10-ounce fractional American Gold Eagles, despite the higher premium. They are available individually as well as in mint rolls of 50. 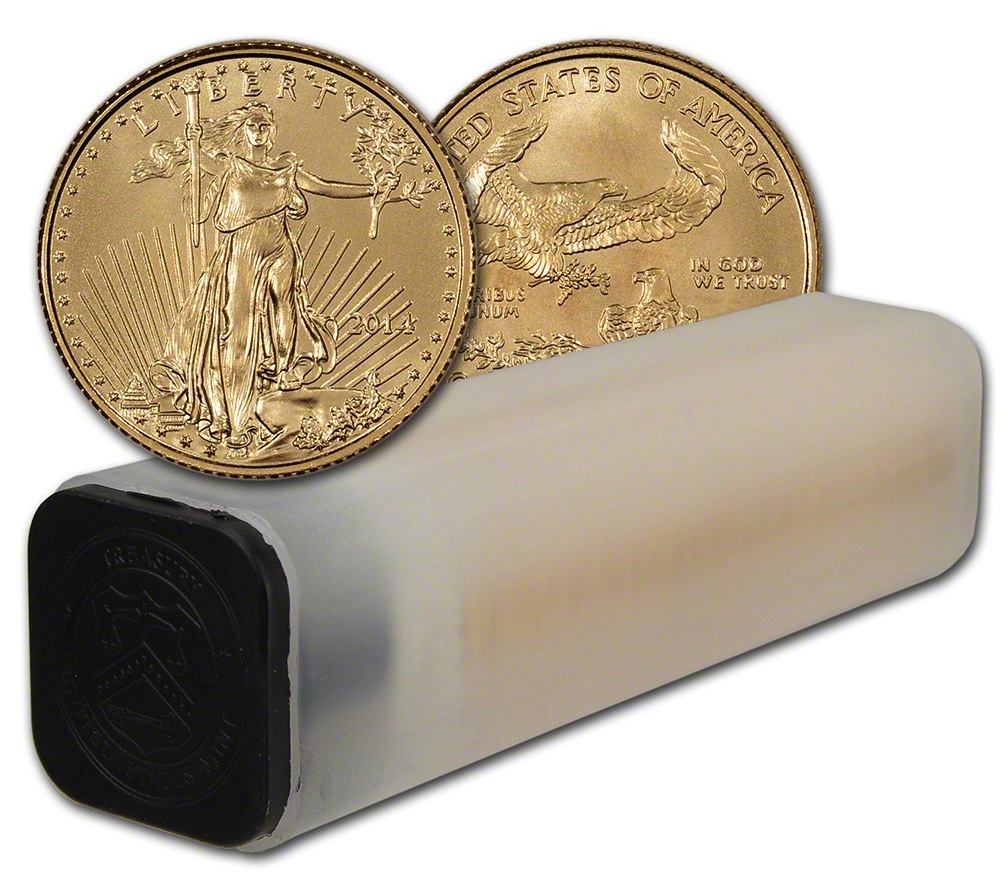 The main upside Maple Leafs have over Eagles are their premiums — Canadian Gold Maples carry a slightly lower premium. The premiums for a brand new (2016) one-ounce Gold Maple currently range from about $30 to $90 over spot. Despite the lower price, however, I think the American Gold Eagle is still the single best gold bullion coin for investment.

But when buying any silver bullion for investment, making larger or bulk purchases is most important. Larger or bulk purchases are most affordable. Moreover, buying bullion coins individually or just a few at a time can be a hassle. You end up with coins everywhere. Trust me, I've been down that road in the past. It's ultimately best to simply make larger purchases.

The American Silver Eagles are available in mint tubes of 20. The Canadian Silver Maple Leafs come in tubes of 25. Buying these tubes is the way to go.

Buying physical platinum is significantly more expensive than gold or silver — the premiums are much higher. And there is significant downside.

The U.S. Mint produces the American Platinum Eagle. But unlike the gold or silver Eagle, the Mint is not mandated by law to produce these coins. So unless there is a significant demand or a lack of material, the Mint can simply draw down or completely stop production — which it did in 2014.

This limited production gives the American Platinum Eagle collector value and adds significantly to the coin's overall cost. The premium for a random date one-ounce Platinum Eagle runs anywhere from $250 to $400 over spot prices right now.

Personally, I own a little from both bullion series. However, you should be warned of one major downside of physical platinum: it's not very liquid.

Buying platinum bullion is easy. Every major online bullion dealer sells it and will ship right to your house. But only a handful will buy it back. Make sure to secure a few options to resell your platinum before making a purchase.

The Canadian Palladium Maple Leaf comes in a standard one-ounce size and is also available in fractional denominations. However, like the Platinum Leafs, these coins are not extremely available and sell with a collector value added.

Moreover, it should be noted that palladium is the least liquid of the precious metals by far. So securing a few resale options is extremely important before buying.

As I mentioned to you on Thursday, I believe platinum has the best upside potential of all precious metals right now.

For most of the past 30 years, the price of platinum has traded higher than gold. But now the platinum-to-gold price ratio is at its lowest point since 1982. I think that'll change in short order. To read why, check out another recent article I published on the Energy and Capital website here.