If you haven't noticed yet, the Bakken is a gift that keeps on giving, particularly for North Dakotans.

Not only has its success dominated headlines in the U.S. oil and gas industry, but you can all but guarantee that it will continue doing so for years to come.

Back in December, the state displaced California as our country's third-largest oil producer.

But that was to be expected, wasn't it?

After all, daily production has more than doubled since 2009:

Remember, that data is from January. Daily output hit 558,000 in February. At this rate, our 600,000 bpd benchmark will be reached within the next three months!

These Bakken drillers won't settle for third place... and neither should you. Besides, it was simply a matter of time before they overtook California. Now it's the same for Alaska.

Within the next five to ten years, I bet the Bakken will even give Texas a run for its money.

The number of producing wells in the Bakken formation has grown six-fold in the last four years. Daily production has more than doubled during the same period.

But take another glance at that production chart above, and you'll see that the obstacle isn't from the lack of drilling.

More than 200 rigs are drilling into the shale formation. That amount would most likely double if there wasn't one major hitch...

The problem is getting their oil out of the state.

Truth is, pipeline capacity was maxed out years ago, forcing companies to ship their production via truck or rail – both of which are costlier than pipeline.

It's also one of the reasons why North Dakota crude is selling at a near-$30/bbl discount to West Texas Intermediate (WTI):

Pipe or Rail, It's Win-Win for Investors

So which will it be, rail or pipe?

It's a good thing for us that we can play both.

Canadian Pacific Railway (NYSE: CP) is ready to begin shipping 35,000 barrels per day of Bakken crude from its Van Hook terminal within the next few months.

Make no mistake, the growth potential is there for investor: 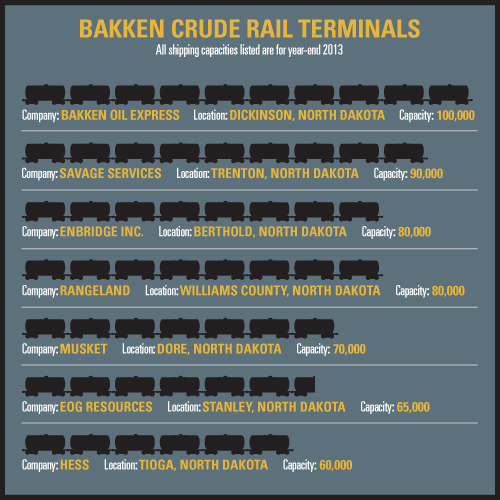 On the pipeline side of the equation, we don't have to wait for TransCanada to cut through the tangled web of red tape and build its Keystone XL project (which includes an on-ramp for Bakken producers).

Then again, neither are they. Despite the election-year politics delaying the inevitable approval for the oil sands pipeline, TransCanada is going forward with the U.S. side of the expansion.

Last month, ONEOK Partners (NYSE: OKS) announced plans to set a 1,300-mile pipeline in place, shipping Bakken crude from North Dakota to the Cushing hub in Oklahoma. The project would add another 200,000 barrels per day to the state's pipeline capacity as early as 2015. With a 43.5% stake in the partnership, ONEOK Inc. has come across our radar before.

Enbridge (NYSE: ENB) is shelling out nearly $3 billion to build a second pipeline from Chicago to Cushing, adding another 585,000 barrels per day to the current pipeline capacity.

The opportunity here doesn't get much better, and all three have delivered a strong return for investors over the long haul. Unlike the major oil companies, these pipeline stocks never disappoint: 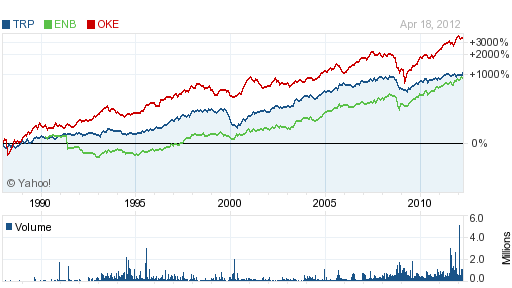 It's a win-win situation for us, because when the transportation capacity finally catches up with production.