It was the perfect Valentine's Day gift for Vladimir Putin...

On February 14, ExxonMobil Corp (NYSE: XOM) and Russian petroleum giant Rosneft (PINK SHEETS: RNFTF) signed an agreement that will result in some fast cash for Russia and an additional 234,000 square miles of oil exploration for Exxon in the Russian Arctic.

In an attempt to make a grab at millions of barrels of fresh crude, this deal gives Exxon access to seven new blocks in the Chukchi Sea, Laptev Sea, and Kara Sea where, if all works out, Exxon could lock in a very sweet score.

Of course, this isn't the first time we've written about the quest for Arctic oil...

Certainly in the past, I've filled these pages with plenty of coverage on Shell's failed attempts to tap Arctic oil reservoirs in the Chukchi Sea. To date, that has been a more than $5 billion exercise in futility.

But that doesn't mean all Arctic oil adventures will turn out the same way. Truth is Exxon's actually going at this in a much smarter way — working with the Russians, who know this terrain better than anyone else and have far more experience in Arctic waters than U.S. teams do. As well, there are fewer regulatory hurdles when it comes to operations outside of the United States, particularly in places where lawmakers could care less if you foul up the water and food chain with an accidental oil spill.

Now, I don't say that to disregard the environmental concerns with Arctic drilling or criticize the production of Arctic oil in general; rather, this is a simple observation of a reality that investors should be aware of when analyzing the potential of Arctic oil production.

Even if Shell has to abandon its hopes and dreams at the Chukchi Sea, it won't break the company. But it will force other oil producers to approach Arctic production in U.S. waters with much less enthusiasm.

That's not to say those reservoirs won't ever be chased down. Certainly the ominous cloud of Peak Oil will see to that. But in the near term, the race to develop Arctic oil will unfold primarily in Russia...

And this is why a number of countries are now calling for a borderless international zone in the Arctic Ocean (although Russia insists such borders do exist, and drawing these borders must adhere to the UN Convention on the Law of the Sea).

But with so much oil up for grabs, this won't be so cut and dry.

According to a piece in the Voice of Russia:

... on August 4, 2007, a Russian research vessel placed a Russian flag on the bottom of the Arctic Ocean directly beneath the North Pole. By doing this, Russia called attention to the fact that this part of the ocean bottom is a direct extension of the Arctic Shelf of Eastern Siberia.

On August 6, the Americans sent a coast guard icebreaker to the North Pole. A little later, Denmark dispatched an expedition tasked with finding evidence of a geological connection between the polar seabed and Greenland. Canada announced plans to build a military base of its Baffin Island. Norway set up an Arctic military command, to be armed with 48 Lockheed F-35 patrol jets.

Ah, resource wars. Where would we be without them?

Mother Russia still rules with an iron fist behind the debris of a rusty iron curtain. Soviet-style threats and stories about war games in Arctic seas were once the making of our collective nightmares and big-budget Hollywood movies... But these days, they are about as relevant to today's younger generation as the fall of Rome.

And for those who do remember the threat of the hammer and sickle, in 2013 many of us find North Korea and Iran to be much scarier bogeymen than the goose-stepping Soviet armies of the 1980s. 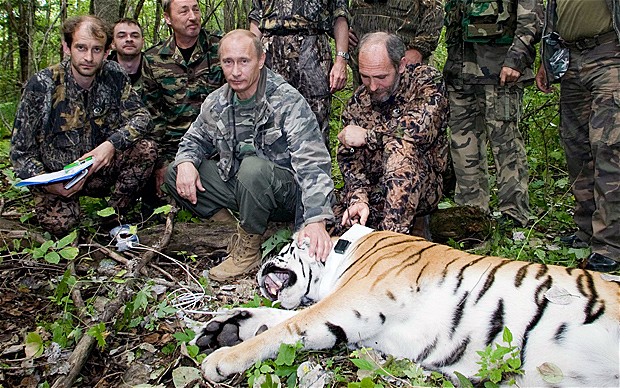 But however you see Russia today, make no mistake about it; those folks are not limp noodles, and they're ruled by a president who, in his spare time, takes down Siberian tigers, collars polar bears, and shoots whales with crossbows.

Vladimir Putin is as about as intimidating as a mixed martial arts fighter on PCP laced with bath salts.  And whether you like him or not, don't think for a second that Russia's Arctic treasure of oil will be pilfered on his watch.

So if you are looking for some action in the Arctic oil sector, your best bet will likely be with either Rosneft or Gazprom (PINKSHEETS: OGZPY).

Of course, given the avalanche of opportunities in domestic shale, I don't see much need to get overly bullish on Arctic oil right now. Certainly on a risk vs. reward basis, domestic shale producers make a heck of a lot more sense.

But if Arctic oil gives you the diversification you desire, than stick with the Russian action...

Because the gatekeepers to about 70% of all Arctic oil feast on caviar and vodka, not burgers and fries.

Arctic Oil Investments
President Obama is not going to burden domestic fracking operations, but he will try to save his environmental legacy. Could the White House be preparing to halt Arctic oil exploration?
Arctic Oil Investing
Shell's Arctic oil program endured six years of countless delays and setbacks before getting off the ground. Is the program destined to fail?
Shell's Arctic Oil Disaster
Arctic Oil: economically unviable - or the future of oil production?
Hydrogen Fuel Cells: The Downfall of Tesla?
Lithium has been the front-runner in the battery technology market for years, but that is all coming to an end. Elon Musk is against them, but Jeff Bezos is investing heavily in them. Hydrogen Fuel Cells will turn the battery market upside down and we've discovered the tiny company that is going to make it happen.