April Decides the Fate of Oil

It’s never pleasant to lose something you’ve had for a long time, especially if that something involves large sums of money.

Which is probably why Russia and Saudi Arabia are reacting so poorly to losing their clout in the oil market. It’s habit, after all, to refer to them as the biggest powers in the industry, the global swing producers who could turn the tides of the market whenever they pleased.

What will they do now that the U.S. is holding that spot ransom?

There’s a big decision to be made this year that could change the course of the oil recovery as we’re seeing it... but what the two countries are doing now may already have been the final nail in the coffin.

Since they’re in essentially the same boat, it’s not all that surprising that both Russia and Saudi Arabia have reacted to the drastic drop in oil prices in much the same way.

Saudi Arabia, for instance, began cutting subsidies on domestic oil use, taxing its citizens, and has been selling government bonds for spare cash since mid-2015.

Russia has been mulling over its own tax reform for several years. You see, right now its oil producers are taxed based on production, currently about $16 per metric ton of oil extracted.

The new taxes would instead be based on the producer’s income, encouraging steadier production and development levels and allowing more room for oil price recovery. It would also let producers expand their current fields or explore in other viable but undeveloped fields, which they've been financially restricted from doing thus far.

It's a start, but both reforms still leave the countries wanting for cash in the end.

And while they dispute these reforms at home, they’re losing market share in the rest of the world.

Last November’s decision to cut a joint 1.8 million barrels of production per day for the first half of 2017 is going... well, see for yourself: 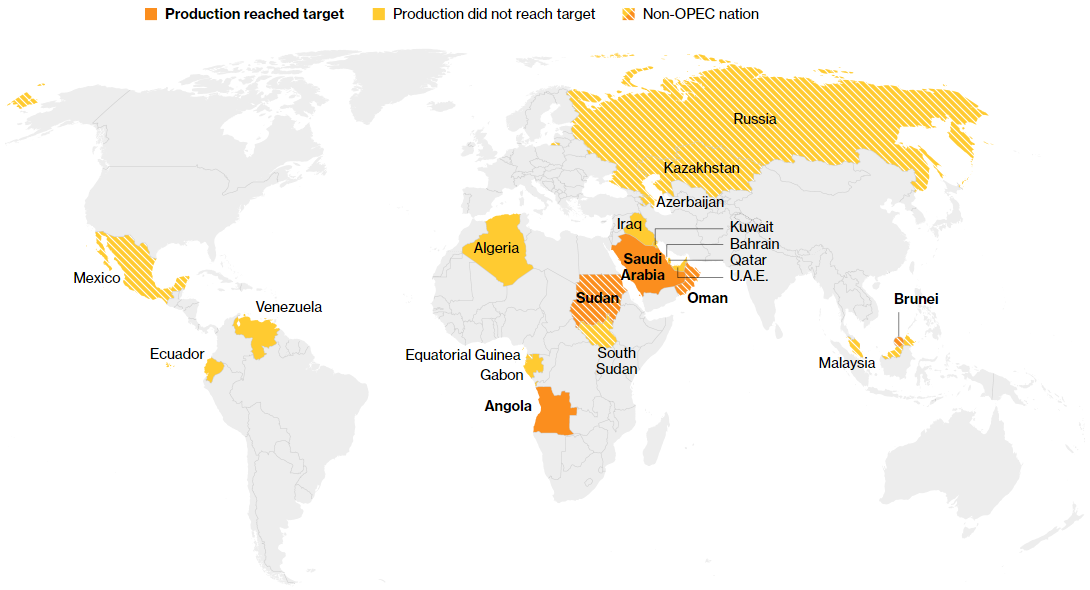 According to Bloomberg, Saudi Arabia has actually cut more than its fair share, around 110% of its goal as of February, while the non-OPEC group of Russia and 10 other countries has only reached about 46% of its goal so far.

For right now, oil's staying around $50. But this still isn't fast enough, it seems...

Earlier this year, OPEC officials stated that the group would not be reviewing the deal until June this year, insisting that it would be more than enough to rebalance the market without adjustments.

But both OPEC and non-OPEC participants have already begun discussing the matter again, with one statement from the committee of ministers calling for April to be the deadline for a new decision.

That means we’re up for yet another meeting in the next few weeks (those always make the price of oil fluctuate more than necessary, so be ready for that) that will decide if this cut goes on the rest of the year.

And just in case it doesn’t, these failing global superpowers are betting on one last ace in the hole...

Come on, we all knew China would be the setting for some of the biggest power plays.

It’s the world’s largest energy market, and the number one consumer of several energy commodities including copper, coal, and lithium.

In oil, it’s second only to the U.S., and the two countries imported about the same amount in 2015.

But this year, China is set to see some of the biggest growth in consumption, around 3.4% to a new record of nearly 12 million barrels per day. While India may beat it out in growth, it won’t be eclipsing that consumption rate.

Which is exactly why both Saudi Arabia and Russia have been courting it as a favored customer.

Russia took the lead as China’s top oil supplier away from the House of Saud last year, an advantage to be sure. And even though Saudi Arabia stole that title back in the first few months of 2017, Russia's expected to come out on top later on.

Saudi Arabia may have a better way in, however: you may remember last year's announcement that it would be selling around 5% of its massive oil company Saudi Aramco in the largest potential IPO the world has ever seen.

Saudi King Salman bin Abdulaziz took a trip to visit Beijing this month, signing off on as much as $65 billion in joint deals. Several of these included petrochemical refining projects between Aramco and a few of China's largest oil companies, which I mentioned last week would be the first logical step in improving its battered oil prospects.

Either way, it’s investors in oil today who will be on a winning streak tomorrow.

The oil recovery is imminent; all that’s left to do now is determine exactly how long we’ll be waiting. By the end of April, we'll know how long this joint production cut will last, and that alone will either take a load off the market or put the pressure back on.

Meanwhile, U.S. oil stocks are already moving up and taking every inch these former power players are giving.