Boom to Bust for Big Oil

Nowhere else does this cliché hold more true than in the shale boom that's currently underway. In North Dakota, we see drillers are consistently improving their operational efficiencies with practically every new well drilled.

Independent companies like Continental Resources have lowered their average well costs in the Bakken by almost 20%.

Their success is far from an anomaly, and it has become a standard for every other operator. What's more is that this isn't restricted to just North Dakota.

Today, competition has helped the oil bonanza spread like wildfire across the lower 48 states as new drilling technology unfolds.

Unfortunately, that simply isn't the case for everyone.

Boom to Bust for Big Oil

Take a look at the other side of the spectrum.

Alaska has arguably been the most sensational disappointment in the U.S. oil industry since the 1980s, and the blame rests squarely on the greed of Big Oil.

In other words, these three oil behemoths have a virtual stranglehold on the state's oil industry. And if there's one thing the supermajors fear more than anything else, it's competition.

That, in turn, has led to a devastatingly steep 74% decline in production since 1988.

Not only has Alaska slipped down the ladder to become the fourth-largest oil-producing state, but things could get even worse over the next few years.

The reason is due to the fact that oil from the North Slope is transported south via the Trans-Alaska Pipeline System (TAPS). This 800-mile pipeline system is the only way for Big Oil to ship its crude from Prudhoe Bay to Valdez.

The problem is that the TAPS will be shut down if production drops below 350,000 barrels per day.

Over the last four years, the North Slope's annual oil production declined at an average rate of 5.85%. At this pace, the state will reach that 350,000 bbl/d breaking point by 2020.

ExxonMobil and its two friends in Alaska can expect production in the North Slope to only decline by 1.9% for the fiscal year ending June 30th rather than the projected 3%. At least, this is according to the spring report released by Alaska's Department of Revenue.

The “good” news doesn't last long. The report also projects that North Slope production will decline by nearly 5% in 2015.

All this does, however, is only slightly push back the closure date for the TAPS. Below, notice that production in the North Slope is expected to average 342,000 barrels per day in 2022.

As it is now, petroleum accounts for almost half of the state's total revenue. Over the next two years, that source of revenue is expected to decline by nearly 40%.

The peak oil clock may be ticking... but not everywhere.

4.5 Billion Reasons to Buy into the Shale Boom

For the fourth year in a row, the U.S. has boosted its proved reserves in 2012.

Imagine our complete lack of surprise regarding exactly where the increase took place... 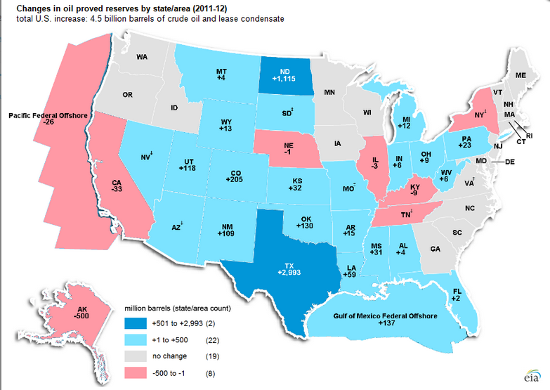 Between North Dakota and Texas, more than 4 billion barrels of crude oil and lease condensate were added to the books. In fact, a little more than one barrel out of every five of the United States' proved reserves is from tight oil plays.

Meanwhile, you might also notice that Alaska's proved reserves actually declined by 500 million barrels between 2011 and 2012.

The growth in the most prominent tight oil plays is nothing short of incredible. Proved reserves in both the Bakken and Eagle Ford plays grew 58% and 169%, respectively.

You can bet everyone wants a chance to get a piece of the action right now — and this is yours.

West Texas Oil
Keith Kohl's favorite microcap oil driller just made a new 52-week high...
The Hottest Oil Play in Canada
Energy and Capital editor Keith Kohl explains why Canada is about to win the North American energy export race once and for all.
Diversifying U.S. Oil Production
Energy and Capital editor Keith Kohl explains why even the smallest Texas towns are booming once again.
Hydrogen Fuel Cells: The Downfall of Tesla?
Lithium has been the front-runner in the battery technology market for years, but that is all coming to an end. Elon Musk is against them, but Jeff Bezos is investing heavily in them. Hydrogen Fuel Cells will turn the battery market upside down and we've discovered the tiny company that is going to make it happen.