I used to be a little jealous of Alaskans.

At one point or another, we've all heard the stories of being paid to live in the state. And in 2007, when a friend of mine received a check for $1,654 — his share of the state's oil revenues — I entertained fantasies of moving there.

That year, only 41% of people receiving a dividend check were born in the state.

The Alaska Permanent Fund was created in 1976, just after the North Slope began bringing oil to market. It was a great way to put money into the hands of the state's residents.

And production was flowing. During the first half of the 1980s, Alaska's oil production enjoyed a certain degree of success. Production was over two million barrels per day by 1988.

Since then, things have gone straight downhill... And last week, things got even worse for the state's future oil production.

They might want to rethink using the word 'permanent' in the name of the fund — at least, for their children...

The USGS revised a 2002 estimate for the amount of conventional, undiscovered oil contained in the National Petroleum Reserve in Alaska (NPRA).

Here's a better look at where the NPRA is located, compared to both ANWR and Prudhoe Bay: 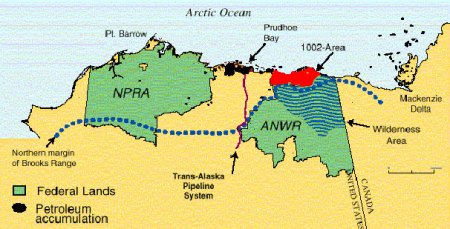 We're not talking about a little tweaking of the numbers here...

The USGS report estimated that the NPR contains approximately 896 million barrels of oil — 90% less than its previous estimate.

The NPRA was previously thought to hold approximately 10.6 billion barrels of oil.

This time, the public can't put the blame on BP. Because according to the USGS, the new estimate is due to the fact that recent exploration drilling revealed gas in most of the area, not oil.

To add even more insult to injury, the USGS also revised their gas estimates, which are now eight trillion cubic feet less than they were before.

And don't get your hopes up for tapping that gas, because there's no infrastructure in place.

In other words, there's no pipeline to bring the gas to market.

Not surprisingly, Alaska officials were quick to save face, saying the USGS estimate did not "truly represent" the NPRA's full potential.

Even if Alaska won't accept the USGS's data, the revision is enough to give second thoughts to drillers.

Same old story for U.S. oil production... Or is it?

You should know by now that Alaska's oil output is circling the drain, thanks to peak oil.

Remember when I said that the state's production rose above two million barrels per day in 1988?

Since then, it's only managed to increase year-over-year production once! That was in 2002, when the state's production increased by 2.1% over the previous year.

Perhaps it's also a coincidence that 2002 was the same year of the USGS's last estimate...

I want you to take a look for yourself, and then tell me if you think the state will be able to keep writing checks to the next generation of residents: 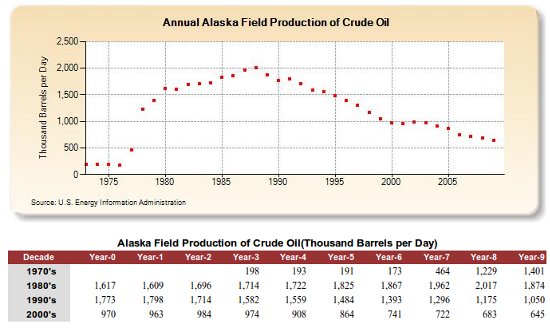 The Last Frontier hasn't seen much success in 2010, either.

According to data from the Energy Information Administration, production during the first eight months averaged 593,000 barrels per day.

Sadly, it's the same story across the entire United States...

In fact the only reason Alaska is still the second largest oil-producing state is because California (holding third place) has been having comparable trouble with declining production. California's statistics show they've only managed two year-over-year production increases since 1985.

But if you're only focusing your attention on companies operating in Alaska and California's oil fields, you've missed the mark by thousands of miles...

The bull is in the numbers

There's no doubt that the Bakken boom is underway.

Even the most pessimistic of readers has to give credit to North Dakota.

Production has been ramping up over the last decade, and is about to move higher during the next few years. In 2006, North Dakota was pumping out 109,000 barrels per day.

Officials are confident that production will surpass 400,000 barrels per day in 2011.

Right now, roughly 95% of the 153 rigs actively drilling in the state are targeting the Bakken shale and Three Forks-Sanish formations.

But while we're banking those North Dakota profits, I believe this is only the beginning for oil profits...

You'll hear all about it in just three days.