Afghanistan Could Dominate This Market

If only politics weren't in the way...

I don't really like talking politics, mostly because political discussions can veer quickly from logic into emotion, something that kills an argument immediately in my eyes.

Longtime investors know this is also the kiss of death for an otherwise strong investment. One emotional day on the market can mean hundreds, even thousands of dollars down the drain.

Once emotions take over, it’s all downhill for both intelligent discussion and profits.

But that doesn’t mean you shouldn’t know what’s going on. In fact, as long as you can keep a clear head, political movements can be some of the most important elements of an investment decision.

Right now, the whole world is basing its decisions on the promises and changes made by the Trump administration. He’s good for a dramatic story, at any rate.

But less operatic political tales can and should be just as important to an investor’s portfolio.

We talk about lithium a lot here at Energy and Capital, and for good reason: it’s making money!

But for every person out there seeing gains on their lithium investments, there’s one who’s bound and determined to find fault.

One of the most common arguments I’ve seen against lithium mining, for instance, is that the biggest reserves of it are in Afghanistan, a country riddled with political controversy.

These inquiries range from polite curiosity to accusations of military wrongdoing for the sake of new lithium supply (kudos to people in the former group; you’re the real heroes).

So I think it’s time we set the record straight: is there lithium in Afghanistan?

A quick Google search reveals that most of the news stories are from way back in 2010 when the theory first spread.

The lack of more recent information isn’t due to there being no lithium in Afghanistan, though.

Far from it. The country really does have the potential to be, as the media once dubbed it, “the Saudi Arabia of Lithium.” In fact, the U.S. Geological Survey reported as much even earlier, back in 2007.

By 2010, when a memo from the Pentagon revealed the "newly discovered" resources, it was estimated that the country could have as much as $1 trillion in untapped mineral reserves, lithium among them.

But an estimate was all it ever amounted to. We still don't know with any certainty exactly how much lithium Afghanistan has.

More recent reports on the matter, scarce though they may be, note that there’s still interest in building a mining industry in the country nonetheless. There’s just one thing standing in their way...

You see, Afghanistan has a number of political obstructions that dramatically restrict investment from foreign companies, including, but not limited to, deeply ingrained government corruption and the continued threat of terrorism from the Taliban and Daesh, among others.

Even domestic producers can’t get a foot in the door with these kinds of destructive deterrents!

It’s a difficult situation, one that has no easy solution.

But at least we have an answer to our original question: yes, there is lithium in Afghanistan.

We just can’t get it.

The thing is, we don’t need it, either.

We have more than enough lithium in the world to cover global demand, even as it grows at a clip, and from much safer sources.

But that doesn’t make it any less valuable, and certainly not if you’re investing now.

As I’ve noted before, the value in lithium comes not from its overall scarcity but from the challenge that is producing large amounts of it at battery grade.

Batteries aren’t the only thing lithium is used for, but they certainly consume a majority of it: 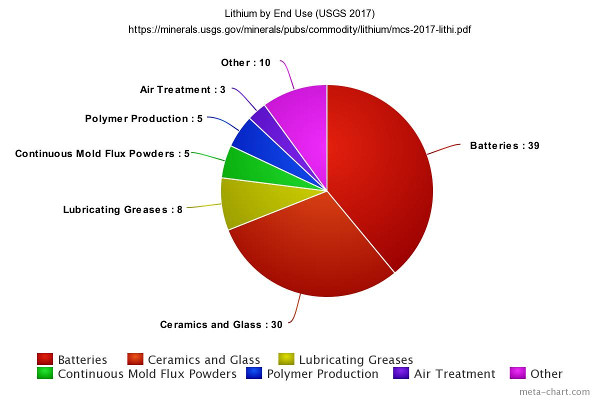 Still, we are going to need more production to come online to keep a supply squeeze at bay. Could we one day see a steady supply of lithium from Afghanistan?

The story of another battery metal may hold the answer...

The War on Cobalt

The world's largest cobalt mines are Glencore’s (LON: GLEN) Mutanda mine and China Molybdenum’s (SHA: 603993) Tenke Fungurume mine, which are both in the [Democratic Republic of Congo]. These two mines account for more than 25% of global cobalt production.

But the DRC is one of the worst countries in the world for mining. There is corruption at all levels of government, a lack of good infrastructure, and the constant threat of political collapse.

In many ways, it’s in the same boat as Afghanistan’s lithium: if the political climate takes a turn for the worse, our main source of cobalt production could shut down.

There is one thing, however, that makes cobalt in the DRC a better bet than lithium in Afghanistan: it’s already a major source!

While the infrastructure could stand to be improved, we are right now getting cobalt out of the DRC. Production there reached 66,000 metric tons in 2016 according to the USGS, leagues ahead of the next biggest producer, China, with just 7,700 metric tons.

In theory, Afghanistan could have the reserves to create a similar gap in lithium production.

But it would take a lot of work — and even more money — to make Afghanistan the world’s leading provider of our "metal oil."

First, we’d have to get past that pesky political red tape.

Then there would need to be exploration efforts even more in depth than the ones that discovered the reserves in the first place.

These steps alone could take years, if not decades, and may still not pan out! Keep in mind that those wild claims made about Afghanistan's reserves are just estimates that cannot be proven until some big changes are made to the country's political situation.

And that’s to say nothing of how long it would take for even one company to actually get production up and running, let alone commercial-scale production. In a good situation, this takes about five years minimum.

Could it be done? Yes, eventually.

Is it likely? Just doesn’t seem to be in the stars, dear readers.

The vast majority of today’s lithium comes from Argentina, Chile, and Australia. Companies building a base in those countries now are poised to be the best investments for years to come.

And while I can’t speak to the controversy surrounding Afghanistan and the people in it, I can say with some measure of confidence that no one is going to be invading the country purely for its lithium reserves.

There’s plenty to go around in much easier-to-reach places, thanks.