The headlines say it all...

In only a few years' time, the solar market has gone from “That stuff'll never work” to a billion-dollar acquisition target of the biggest oil companies in the world.

At the turn of the century the world only had 1.4 gigawatts (GWs) of installed solar capacity.

Most of the growth has come from Europe – particularly Germany with 17 GW – which boasts over 75% of all installed solar worldwide.

Their head start can be attributed to attractive policies the U.S. failed to embrace. But falling prices, as you'll soon see, will mean the spread and mass adoption of solar in the next few years.

All technologies are more expensive in the beginning.

Solar is the same way. 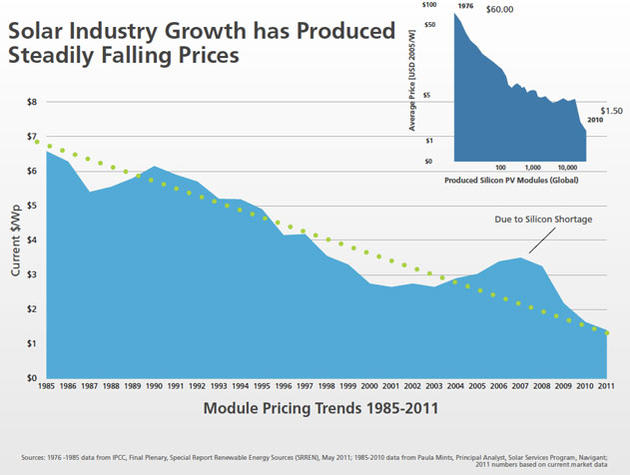 Just like similar industries – circuit boards, for example – costs will continue to fall with volume. For every doubling of solar manufacturing capacity, costs fall about 20%.

In some markets solar is already cheaper than grid electricity. And as more and more solar is installed, the costs will only fall further.

We're at a point now where solar installations are growing at a compounded annual growth rate (CAGR) of about 65%.

And as SunPower (NASDAQ: SPWRA) founder and chief technology officer Tom Dinwoodie (the man who just sold a majority stake of his company to Total for $1.4 billion) puts it:

That 17 gigawatts installed in 2010 is the equivalent of 17 nuclear power plants -- manufactured, shipped, and installed in one year. It can take decades just to install a nuclear plant. Think about that. I heard Bill Gates recently call solar "cute." Well, that's 17 gigawatts of "cute" adding up at an astonishing pace.

We'll still need nuclear baseload power to be sure. The point here is twofold.

Between now and 2020, solar installations will double almost three times. Check out how that looks graphically: 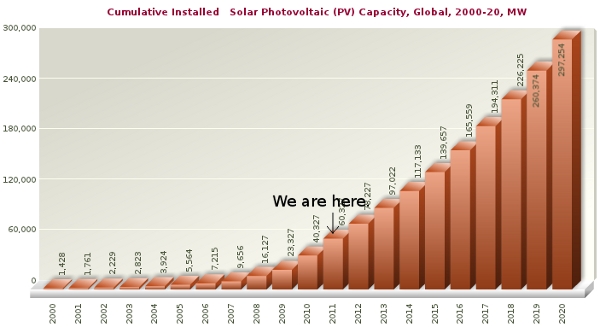 Germany will continue to dominate the market for the next few years, with the U.S. expected to come on strong in the second half of the decade.

China, Italy, Japan, Australia, Canada, and Spain are other countries to watch for coming installation growth.

But, at least as it stands right now, there's only one country to watch for when it comes to the actual production of solar equipment – not just the installation.

In the early oughts Germany was by far the solar production leader. But as always happens in the manufacturing industry, China was quick to enter and dominate the game.

Though Europe is still the installation leader, China owns a majority of the production – as much as 60% by some estimates.

And for the first time last year, half of the largest solar companies in the world were Chinese. Though the list may vary slightly depending on the source, here's the current list along with 2010 shipments:

I know I've thrown a lot at you today, but a thorough solar update was long overdue. And in addition to future editorial and our paid services, this should serve as a good base for anyone looking to start investing in solar.

For more information, I've just recorded a short white-board video about materials of the future. It covers new solar materials that'll be used in the next few years, as well as new types of battery and rare earth technologies.

We'll start posting videos like this once a week to help you better capitalize on the topics we cover in daily e-letters.

P.S. One of the main things allowing the wider use of solar is advanced batteries. I told you last week how the Army and Marines were using solar energy and batteries to power crucial communication equipment. But soon, entire neighborhoods will use this perfect combination to eliminate the need for fossil fuels. More information on how that's being done – and how you can invest in the technology – can be found here.

Big Oil Solar Play
Editor Jeff Siegel discusses Big Oil's latest solar play.
Vanadium: The Best Thing Since Lithium
Vanadium can charge and discharge simultaneously, can release energy instantly, and is ideal for both transportation grid applications. In other words, it's the new holy grail of battery materials.
Canadian Solar and Chinese Solar Cell Plants
Guest contributor Brianna Panzica takes a look at Canadian Solar's influence on solar cell plants in Eastern China.
Tapping into 'Cambridge Crude'
Throughout history, new inventions and ideas have made our lives easier and helped us overcome disaster, disease, and dictators. And throughout history, those who've identified which new ideas were the best have been able to drastically change their financial situation.
Hydrogen Fuel Cells: The Downfall of Tesla?
Lithium has been the front-runner in the battery technology market for years, but that is all coming to an end. Elon Musk is against them, but Jeff Bezos is investing heavily in them. Hydrogen Fuel Cells will turn the battery market upside down and we've discovered the tiny company that is going to make it happen.