A Running Leap Off the Green Energy Cliff

We've been watching our government stick its fingers in the energy pie for decades now...

Oil and gas subsidies go back nearly a century. We've doled out an average of $4 billion to them every year since.

These incentives include a variety of things like tax credits, write-offs, and royalty reductions.

While $4 billion may not be a drop in the bucket, it's going to a place that supplies more than 80% of our energy consumption. Oil absolutely dominates our transportation sector today, while coal and natural gas combined supply two-thirds of our country's electric power.

To put things in perspective, $4 billion for oil seems like a bargain when you consider Uncle Sam dished out $16 billion to the renewable sector in 2011...

But we can't begrudge green energy for needing a little boost, can we?

Without those handouts, some of those renewable sectors would would simply collapse (and we'll touch more on this in just a minute).

When the United States finally makes its transition away from the fossil fuels, California appears to be the example to follow.

The Golden State is unmatched when it comes to ambitious standards for renewable energy. In 2002 the state set up its Renewables Portfolio Standard (RPS) program with a specific goal in mind: 20% of their electricity mix will come from renewables by 2017. A year later, they shortened the 20% time frame to 2010, then extended the RPS to 33% by 2020.

As you can see, they've been making some progress: 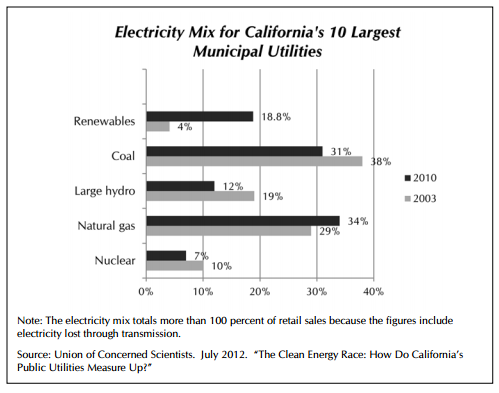 By 2010, almost 19% of California's electricity came from renewable sources (wind, solar, geothermal), while another 12% came from large hydro plants.

Boosting renewables to 33% of their electrical power mix within the next eight years is admirable, isn't it? I mean, aside from a few oil execs driving Hummers around Texas, who would could say 'no' to that?

Well, you might have some reservations if you saw the price tag for the state's residents... 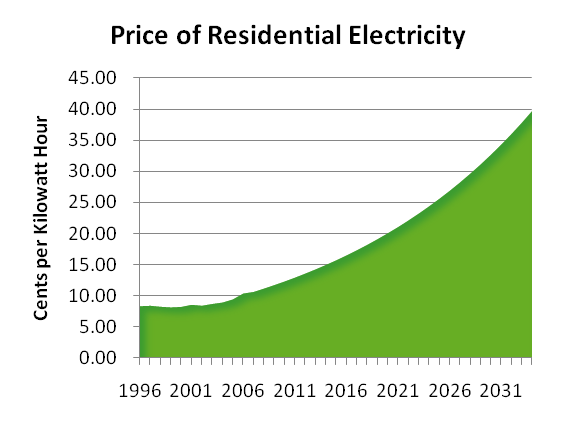 According to the EIA, the people of California are paying roughly 30% more for their electricity than the rest of the United States, and in some cases, it's drastically higher than that.

Still, the extra cost being tacked on to their monthly electric bill isn't even the most troubling part — nor is the exorbitant gasoline prices they pay due to strict fuel standards.

No, what it boils down to is the questionable success of green energy in the coming decades.

I mentioned earlier the large government subsidies that Obama is directing towards green energy. Imagine what would happen if those subsidies — the only thing keeping some green sectors alive — dried up?

That's what nearly happened this week when the 2.2 cents per kilowatt-hour production tax credit was renewed; it was slipped into the fiscal cliff bill at the last minute. The credit covers the first ten years of operation for new wind installations that are started in 2013 and operational in 2014. Of course, it also comes with a taxpayer cost of about $12 billion.

Not extending that critical tax credit would have had a devastating effect on the entire wind industry.

Sadly, no. Because in 12 months, the U.S. government will have to revisit the issue all over again.

The Game is Rigged — But Not for You

It's been an absolute nightmare for individual investors.

Here's a look at how you would have fared with bets on two wind ETFs: 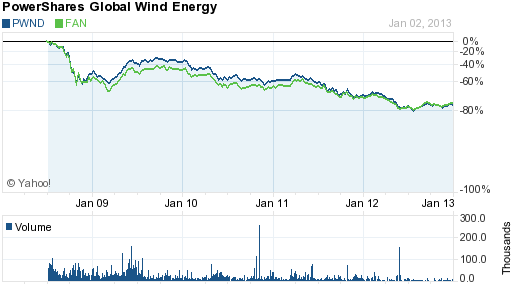 Had you decided to throw in your hat with individual wind stocks, there wouldn't be much left right now... 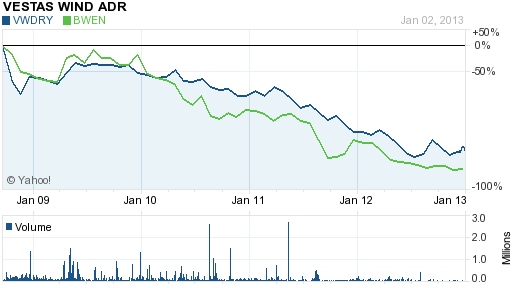 How long do we have to watch our government's green blunder unfold before it finally sinks in?

The picture becomes even harder to look at after realizing these green execs are lining their pockets while producing lackluster returns for their shareholders.

But if you really study California's energy transition plan, you'll see that it isn't just relying on renewable sectors being propped up by your hard-earned tax dollars.

The state will be forced to embrace another energy source if it wants to achieve its ambitious renewable energy goals...